How can Captain America survive a skydive without a parachute?

At the start of the recent Captain America: The Winter Soldier trailer, Cap jumps from a plane. Except he does this without a parachute. In Avengers, he does use a chute when jumping from a Quinjet to catch up to Thor, Iron Man, and Loki, which seemed to indicate he needs a parachute to land safely.

How can he survive a skydive without a parachute?

This scene is an homage to an obscure comic Tales of Suspense #75, in which Captain America is falling from a plane without a parachute. 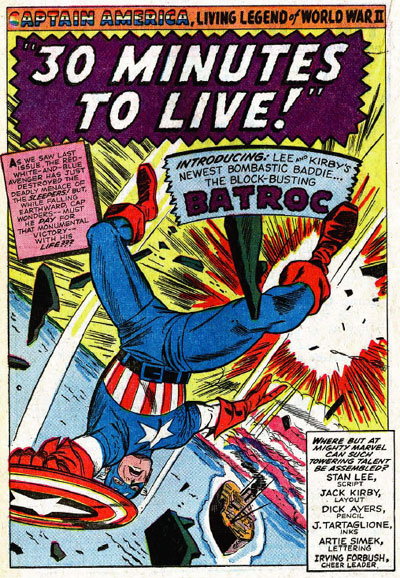 Captain America plummeting to his death after blowing up the Skullship. Where is his parachute? (Stan Lee later admits they forgot to draw it, but this was a famous event in that it increased interest in Marvel's No-Prize, an award for explaining events "in story" that would rationalize mistakes made in the production of the book.)

Given the Captain's perfect physiology, we are expected to believe he can somehow survive a fall into water without serious injury. And we did.

The trailer shows him landing in water. In the movie The Avengers he parachutes over land. I guess the idea of hitting water at 200 miles an hour appeals to him more than hitting a mountainous forest.

Though the accepted answer says it is a reference to an old comic (and this is probably true), his survival is not entirely based on Superhero Steroids. In the scene you watch him fall, but just before impact he snaps into a pencil dive. This would allow him to hit with minimal force, and (yes) due in part to the indestructible factor given to him by the Super Soldier Serum he would survive the fall. See This link.

18
How heavy is Captain America's shield?