When (in which year) is "Robocop" set?

Is there any indication in Robocop of which year it is set in? It looks like the "near future" but is there any more specific clue?

The closest I could find to an official answer from the author was from a 2009 interview with co-writer Ed Neumeier who said:

Ed Neumeier: There was never a year on that picture and that was actually a big fight at the time because people kept asking me, “What year is this set in?” And I kept saying, “I’m not going to tell you.” That was because I always thought well, we’d pass it, but we haven’t passed it except in our imaginations anyway.

Date based on movie and book

This based based on a number of references:

1. The duration of the events in the movie is four months.

On the first day of the movie (when Murphy is transferred to a new police department - Metro West), there is a board meeting at OCP. During this meeting, the Old Man says:

In six months we begin construction... of Delta City.

Then, in one of the final scenes, Dick Jones says to Clarence Boddicker:

Suit yourself. But Delta City begins construction in two months.

Conclusion: based on time to complete Delta City, the events of the film take four months.

This is based on Bob Morton's statement in that same meeting:

I'm confident we can go to prototype within 90 days.

Due to the interchanging of scenes between Murphy's first day at the Metro West department and the board room scene, we can conclude that the 90 days starts from Murphy's first day. This means the scenes involving Robocop (crimefighting, visiting a school, going to Murphy's home, etc) take place over about a month, since this in total makes the four months of the film.

This is for you. Happy New Year.

This is the final scene of the reconstruction, implying it is near the end.

4. Based on the above, the events take place from November of one year to February of the next (plus or minus one month).

Hence, the start of Robocop must have been in the October - December range and four months later implies ending in January to March. This is therefore November to February +/- one month.

There is no indication in the film of which year Robocop is set. However, the book provides the answer. From page 148:

"Good morning." Casey smiled, his teeth nearly reaching his ear lobes. "I'm Casey Wong with Jess Perkins and these are today's top stories. It was revealed today by doctors at the Texas Clone Institute that Hollywood immortal Sylvester Stallone died yesterday during an unsuccessful brain transplant. A longtime supporter of bio-engineering, Stallone was ninety-seven. His last film, Rambo 38: Old Blood, will be released posthumously next month."

Conclusion: Robocop is set from November 2043 to February 2044, plus or minus one month.

If you ever played the coin-up arcade game of Robocop, the intro says that the events of the movie takes place "In the year 1990,"

In the year 1990, old Detroit has been overtaken by crime. 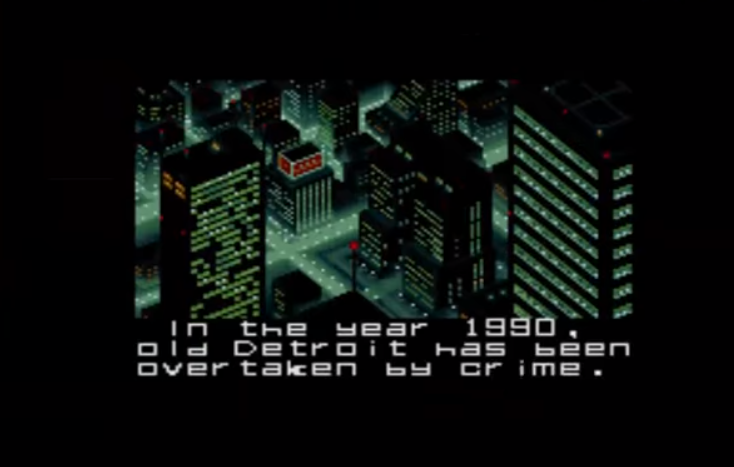 On the French cover of the VHS movie I owned when I was a kid, the back of the cassette cover had the movie's synopsis saying: "At the dawn of the new millennium".

So, Ed Naha, the writer of the movie tie-in really exaggerated, I hardly imagine a 1986 Ford Taurus riding the streets of Detroit of 2043/44 plus or minus one!

Ed Neumeier clearly emphasized on the idea that Robocop takes place in an undetermined future. The idea was also supported by the lead actor Peter Weller when he was interviewed in early 1987 during the post production, saying that "[the story] takes place nebulously in the future".

I've (re)read yesterday the official novelization of Robocop and indeed the author takes the freedom to add several (and even emotional elements) to the story. As the tie-in is linked to the original screenplay by Neuimeier/Miner Remember, in the forth draft of the script, when Frank Frederickson was ambushed, there was a clear indication that moon is now colonized (which theoretically could not have been true in 1999) and the reader would assume that the story indeed takes place sometimes in 2043/44. It may also imply that Naha somehow wanted to follow the early idea of Ed Neuimeier's original outline. Just put in mind, that the root of Robocop can be traced back in 1981. When Ed wrote the early treatment of the story based on Blade Runner, a movie which clearly took place in the far future (assuming 2043/44). The story like the Corporate War was rejected by the studio, until Ed met with Miner (who was the man who got the idea of having a policeman shot in the line of duty and became the principal donor). The duo started working on the draft in 1984, after the release of Terminator. Before they started shooting in 1986.

Speaking of the Ford Taurus. the car has indeed revolutionized the auto-industry when released in 1986. Hailed by critics. Praised by consumers. It clearly marked America's departure from cubic-style, T.J Hooker Ford cruisers. And was the thing of the FUTURE!

But it would be silly to say that the story in general takes place in 2043/44. But let's be safe here and go back to the idea that the movie is set in XX in the future.

And rebuilt and activated on January 14th, 2030 (which is when the primary action of the film takes place).

18
In Robocop, why was ED-209 loaded with live ammo during the demonstration?
13
Why did OCP build Robocop?
9
Is the Robocop universe the same as the Terminator universe?

12
Did the general public know RoboCop was a cyborg?
19
Was Officer Lewis originally planned to become a RoboCop?
18
What's the 4th Prime Directive of RoboCop?
22
Is there an easter egg in the credits of Robocop?
13
Why did OCP build Robocop?
18
In Robocop, why was ED-209 loaded with live ammo during the demonstration?
1
In the original RoboCop, why are RoboCop's POV shots at eye level of the other characters?
20
How many human body parts are inside Robocop?
8
Could Robocop drown?