Can Superman reverse time in comics by flying faster than speed of light?

I recall hearing people (deservedly) ridiculing the Superman movie (Superman I with Christopher Reeve) for the "fly faster than the speed of light, so he can reverse time and go back to the past" plot device.

Was that ability of his made up for the movie, or was it actually present in any DC comics?

Can he reverse the flow of time for an environment outside of himself by traveling faster than light, (as he does in the Superman movie)? No. This was some bad hand waving done to rationalize even worse writing. Superman never had such a power in the comics.

Has he on the other hand traveled through time to different periods by flying faster than light? Yes. Pre-Crisis Superboy was a regular time traveler using the FTL method. But he never used this power to intentionally alter the past significantly if he could help it.

One of the more noteworthy stories involving the Time Trapper came after the reality-altering mini-series Crisis on Infinite Earths and the 1986 revamp of Superman's origin, which removed Superboy from Superman's and the Legion's history. Given the problems this posed for Legion continuity, it was later revealed that the Time Trapper created a pocket universe from a slice of time in the distant past, and altered events in this reality so that an Earth resembling the pre-Crisis one was formed, complete with its own Superboy. The Time Trapper then further manipulated the timestream so that whenever the Legion would travel into the past to visit the 20th century (or Superboy visited the Legion's future), the two would be directed into each other's worlds. However, the "pocket universe" lacked a Kryptonian Supergirl, and thus was not a perfect answer to patching Legion continuity. (The "pocket universe" was later revisited and made the point of origin for a non-Kryptonian Supergirl, also known as Matrix). 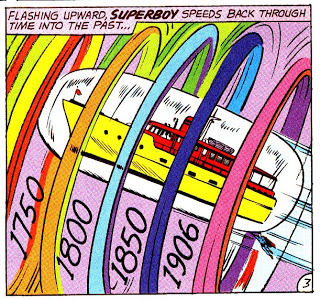 Travel through the fourth dimension, color coded for your convenience. 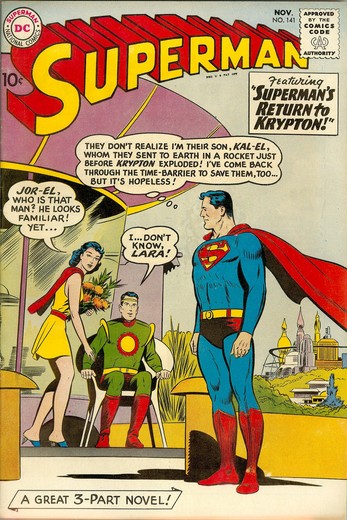 Superman easily has the ability to travel through time. Not just back to the past but also to the future. Think about it, he travels 13 trillion times the speed of light when not minding the atmospheric pressure, he moves so fast that he converts his own body, an object that obviously contains mass, into pure energy. That's fast enough to bend reality to his own will. This means that he litterally has time in his hands. He is able to move both himself and the whole world back in time. In the movie: Superman 2, he reversed the time of the Earth's entire solar system just by moving fast enough to reverse the direction of the globe. If he did the same thing just the opposite direction, he could move the earth to its future. This is a feat that not even the Flash is able to do. Simply because the Flash has trouble moving past the speed of light he's only done it once and it was such a big deal. Supes travels to distant galaxies at over 200 billion times the speed of light and gets back in seconds.

Not the answer you're looking for? Browse other questions tagged dc time-travel superman or ask your own question.

42
How do we know the Flash is faster than Superman?
33
How did Superman turn back time in the first movie?
6
Superman/Flash Time Travel

14
Superman, faster than light? and escaping from kryptonite radiation
12
How are there only 5 Braniacs in 1000 years?
33
How did Superman turn back time in the first movie?
0
Are Superman's costume changes scientifically possible (manipulating Atoms)?
10
Why does Senator Finch suspect Superman's involvement in the "desert incident"?
3
Story by Aaron Bernstein about a man going to space at a speed faster than light and looking at the Earth of the past
1
How much time does the Flash need to reach lightspeed?
25
Time travel "viewer" device discovers a spaceship on ancient Earth
10
Superman comic story where he wears a different costume and has an actor pretend to be him