In reading several of the Deadpool story lines, I often come across the inner-dialog box.

Where did Deadpool's inner voice originate from? Is there an issue(s) that explains the origins? Or does it happen to be that they appear with no explanation? Can someone point me to its first appearance?

The Little Yellow Boxes as Deadpool affectionally calls them, are Deadpool's "not always so inner" inner monologue.

It is the same type of inner monologue/captions any comic character has, except that Deadpool, written as insane/aware of his status as a comic character, knows they exist as boxes. Deadpool often breaks the fourth wall, and the little yellow boxes are one way of showing that. His inner monologue has been LYB since before his first ongoing series, but he didn't become self aware about them until Deadpool Vol 1 by Joe Kelly. It's noted that he often thinks the LYB out loud (most people just ignore him): 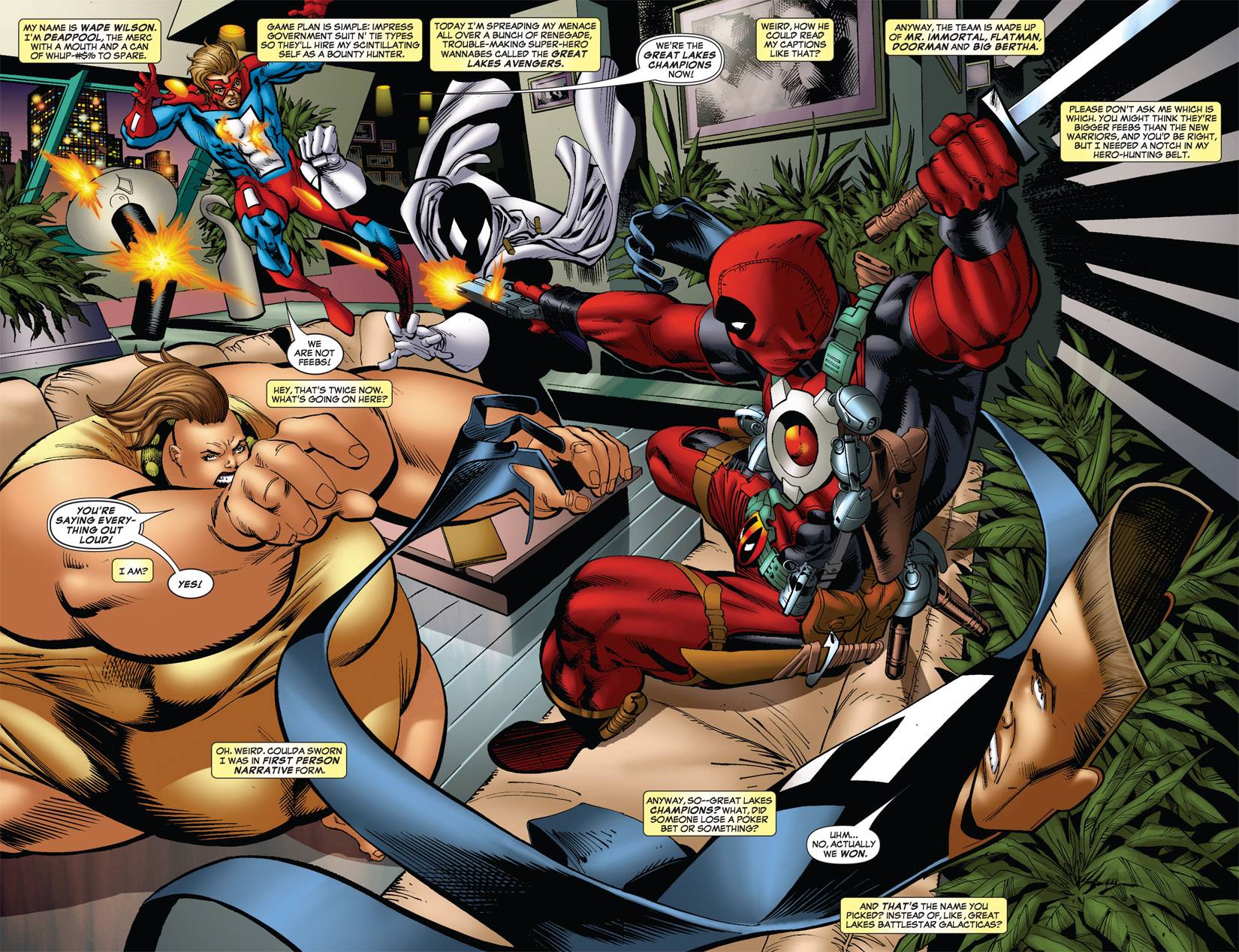 The LYB are NOT a second voice, they are Deadpool's inner voice. He did not hear voices before.

The Awful White Boxes are a creation of Daniel Way, introduced in Deadpool Vol 2. Way never explained them in-universe except that Deadpool is ""crazy lol"". They were later retconned, explained, and removed in Deadpool Annual 2013, as the result of Madcap merging with Deadpool after getting electrocuted to death by Thor (he got better).

The last ones are the Little Red Boxes introduced in Deadpool Vol. 3. These are immediately explained as the soul of S.H.I.E.L.D. Agent Emily Preston, who was killed during the first arc of Vol. 3 and inserted into Deadpool's body for safe keeping in the mean time. She was removed in Issue 24.

Here are the two attributions that I can find:

The first comicvine attribute places it as a result of actions in Deadpool Kills the Marvel Universe, which was October of 2012.

But, something even worse happens in this particular universe. Psycho Man fails to overtake DP. And, although Psycho Man is murdered by DP (along with the rest of the employees and patients of the psychiatric institute), his attempt at mind control unlocks a new inner-voice. This voice continues to insist that DP kill the entirety of the Marvel Universe, to spare them from the misery they're put through for the entertainment of readers.

However, a question on metafilter, "When did Deadpool start talking to himself" was in 2009, before the publication of the above. They attribute it to Daniel Way, and Deadpool: Merc with a Mouth #1, based on this blog post, which would confirm the 2009 origin.

This issue isn't terrible by any means, but it is largely derivative of recent efforts. Victor Gischler, also currently penning Punisher: Frank Castle MAX, has stepped in as the writer for this new series. Much like with Punisher, his interpretation of the lead hero just doesn't quite measure up to previous stories. Gischler shows himself to be a staunch supporter of those newfangled dual monologue boxes that so dominate Daniel Way's Deadpool book.

Further corroborating the Daniel Way attribution, is an interview with Daniel posted here where he talks about the dual box monologues. (Date Oct, 2008)

During the course of his job, Deadpool has had some pretty interesting conversations -- many of them with himself, depicting on the page as two separate inner monologues. Some might think this is Deadpool chatting with his Ego and Superego, but Way cautions readers against trying to psychoanalyze Wade Wilson. “There are times when it sort of does play out like that,” the writer said. “The white first person narrative caption box is kind of what he's really thinking. Then there's the yellow box which is his diary and that's kind of what he wants you to think he's thinking, but there are times when that completely flip flops. It's like he can't keep things straight. Deadpool very much lives in a world of his own construction so he's not very big on rules and order. Everybody has those warring impulses, the angel and the devil on your shoulders. It's just that in Deadpool's case, they're both devils.”

Don’t know why the other guy got a downvote. The information he states is also mentioned on the wiki:

Prior to the Secret Invasion, Madcap once again encounters Deadpool, and in the midst of an altercation with Daredevil and Thor, Thor's lightning reduces the two to a large pile of ash. Though it initially seems that only Deadpool regenerates and survives, he eventually realizes the two actually regenerated as one being, with Madcap becoming one of the "voices" within Deadpool's head (explaining the appearance of a new, "extra" voice in Deadpool's appearances in Wolverine: Origins and Deadpool vol. 2). After Madcap's personality asserts itself sufficiently to use his own powers in a later altercation with Thor and Luke Cage, Deadpool convinces Madcap to manipulate the two affected heroes into tearing Deadpool's body in half, with one half regenerating fully as Deadpool, and the other as Madcap.[16]

While these answers are very helpful, I have a different answer than what was given here.

Many of Deadpools issues have the voices (thanks to Daniel Way) and that's great even if there never was an origin given when they weren't there to start.

In Deadpool Annual #1 Madcapped Deadpool meets the regenerating crazy man known as madcap. To start this issue Deadpool is relating that this issue takes the reader back before Daniel Way and Posehn and Duggan, to answer "one of the most frequently asked questions since my (Deadpools) story began..."

The story takes place "some five or six issues before Secret invasion". The issue shows Deadpool in Hells Kitchen ready to shoot Matt (Daredevil). Deadpool is interrupted by madcap who shows up and irritates Deadpool, and soon Thor also shows up. Thor and Daredevil have no problem beating them and Thor lightnings them both to ash.

Deadpool, of course, regenerates and when he wakes up, madcap is gone and there's a strange new voice (in a white box) inside Deadpool's head. Deadpool then shows you a montage of all four volumes of Deadpool by Daniel Way and tells you how he grew to love the new voice in his head.

After the volumes by Daniel Way, Deadpool takes the job to kill Matt again, and the white box points out that he's Daredevil. Deadpool reveals that he set a bomb in a nearby building to distract the neighborhood heroes and waits for it to blow. Luke cage shows up, Deadpools' bomb in tow, and beats Deadpool up pretty badly.

"When Thor zapped us in a pile together.. we healed all mixed up. Two in one body. You've been starting. But he's been here the whole time, whispering in your ear like a tumor. But now... It's my turn.."

Because Luke cage punched Deadpool in the head damaging his brain, madcap is able to take over and use his psionic ability to look Luke Cage in the eye and Cage begins dancing. Thor sees and comes to help and is soon caught by madcap's abilities and begins dancing as well.

Deadpool comes up with an idea and madcap agrees. Deadpool tells madcap to think left and he'll think right, he then had Thor and cage rip him in half. Thor and Luke cage leave, the control broken through madcap and Deadpool's separation.

Both halves of Deadpool heal. One as Deadpool, and the other as madcap. Deadpool and madcap part ways with a sad look back and a vague promise of "I'll.. I'll call you." And "we'll always have that".

Deadpool is seen walking alone on the roof and says that "it's quieter now. Lonelier. Have i changed? Have i grown?" Daredevil then shows up to beat Deadpool up but Deadpool dismisses him, telling him to go away because he's not in the mood. Deadpool sits, staring sadly and rendering that he couldn't come up with a single wisecrack during his small fight with Daredevil, and says all he could think was "I miss that other guy. He'd have known just what to say. This might be the end of a beautiful friendship."