The plot involves Nazis time-traveling to the present day. A major plot element was discovering that the Nazis were trying to steal books about World War II. Unfortunately, I don't remember much if anything about the time travel device. It felt like a family comedy -- it wasn't taking itself very seriously and had at least one kid in it.

One scene I remember is a Nazi soldier rolling a "potato-masher" grenade down a hallway into a room of a house, and someone -- possibly the kid -- picking it up and throwing it back. It's possible it was a smoke grenade; I don't recall an explosion. 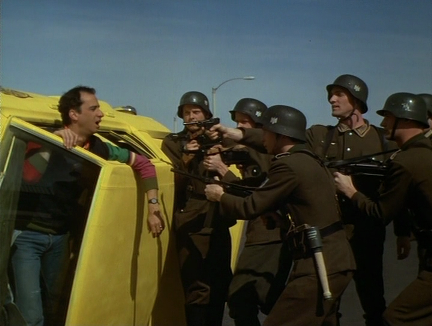 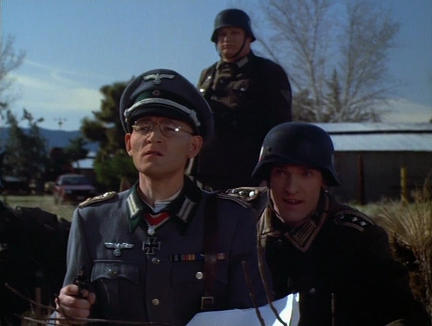 Fred Johnson is an average American with a simple life, until he hears peculiar noises next door. His neighbor, Professor Memo, has conducted experiments which have crossed paths with a German time machine from 1942. Fred and the professor must find a way to stop the Germans from taking vital information back through time, and change the course of history. Fred calls on police officer Butch, a by-the-book cop, who finds this story absurd... until he too finds himself face to face with the outlandish soldiers. On a roller coaster rescue mission, Butch and Johnson overtake the squadron but it's too late. The records have already been taken back in time, leaving our heroes only one choice.... they must ride the vortex back to World War II --- Edited from Wikipedia