Is it the lawgiver or the ammunition that is special?

The Judges of Megacity-One use the iconic Lawgiver pistol to hand out justice. More than just a standard sidearm the Lawgiver can fire multiple types of ammunition. But the magazine it uses appears to be almost identical to a modern firearm magazine that fires standard munitions. So my question is, does each magazine carry a certain amount of each type of munition (high-explosive, incendiary, non-lethal/rubber, armor piercing, etc.) or is it a standard round that has the properties selected by the user added to it by the Lawgiver when the round is chambered and fired?

(Note: I am referring to the Mark II Lawgiver, however if the tech is the same an answer pertaining to the mark I will be acceptable)

Both. The Lawgiver was designed to be a multipurpose, long range, incredible deadly firearm, capable of supporting a Judge in the deadly environments of MegaCity One. The weapon was durable, capable of being used as a bludgeon in addition to shooting people at ranges up to three miles with smart ammunition.

Because Judges tended to die in the line of duty, Lawgivers were designed to detonate if the proper biometric handprint wasn't used, to keep them from be used against other Judges.

The Lawgiver Mark I was a multifeed device capable of taking ammo from three different chambers allowing three different types of ammunition able to be selected by a dial.

The Lawgiver Mark II (in the comics) drew all of their ammo from a single chamber and each round was jacketed as needed. (Call it super-science, and leave it at that). The weapon was also capable of add-ons for a variety of grenades, stun rounds and hypodermics.

The multiple round system supported a variety of common round types including:

The Lawgiver has been shown to be slightly less capable in most movie depictions where it has more than one feed chamber feeding a variety of ammunition, allowing it to run out of one type of ammo but retaining others.

The Lawgiver in the 2012 film Dredd resembles the MK II model. The "Hot Shot" round used in the standoff in the beginning of the movie, although carrying the nickname of the Heat Seeker round, is more of a focused pyrotechnic.

In the 2012 movie Dredd, a revised version of the Lawgiver II demonstrated seven types of ammunition, which could be voice activated : 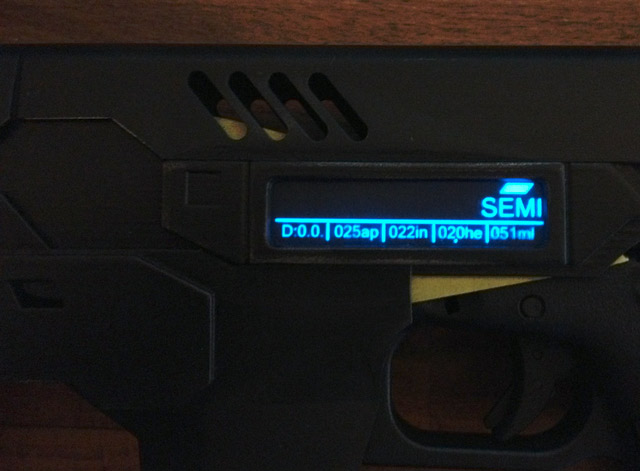 Here is the current "take" on the Mark II (comic) lawgiver, as per Planet Replicas production designs (copyrighted). Dan took the previous designs and tweaked them, to make his own version on the Mark II, which has now been adopted by almost all Dredd artists (Cliff Robinson notably uses the Termight Replicas model - based on his own designs, still, for his Dredd). This should explain the functions and ammo capabilities better than I could....

Scroll to the end of the article to see the specific cutaway designs to which I refer. These are now taken to be canon, in the comics.

The Lawgiver has 5 types of ammo:

All of these extras are fed through the frontal clip. Looking at the schematics the frontal clip appear to have 12 shots visible with maybe 4 more that wont show due to the clip insertion into the gun´s casing. That means that the actual special round count in a Lawgiver II is of around 4 bullets of each that is not Regular hollow heads. (4 Incendiaries, 4 armor piercing, 4 hi-ex and 4 stun) His belt clips are Hollow Heads only with 4 new clips plus the one loaded in the lawgiver (thinking on the rapid fire function it makes sense)

Not the answer you're looking for? Browse other questions tagged weapon dredd or ask your own question.

86
What is the reason that lightsabers have different colors?
13
What does Anderson sense about Judge Dredd in the movie?
3
Was the unnamed techie in Dredd a cyborg?
9
Why did Dredd not take the first cop's bullets?
7
How does the court system work in the Judge Dredd universe?
6
In Dredd (2012), what was Kay thinking about, that freaked Anderson out so much?
18
How do people breathe in the Dredd universe?
1
How does Dredd know the driver is under the influence of narcotics?
2
Is everyone in the justice department a Judge