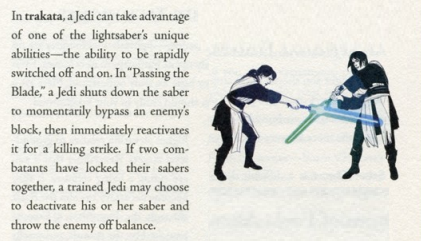 2
Lightsaber combat trick
-1
Why don't lightsaber users turn off their lightsaber midfight to pass through their enemy's defense?
21
How long does it take to activate and deactivate a lightsaber?

15
Why don't Jedi and Sith wear minimal gear for maximal lightsaber efficiency?
13
Why don't we see more dual-phase lightsabers?
7
Is there a case of a Force user using the Force to curve a lightsaber blade in Legends?
47
How is it possible to do round swings with a lightsaber?
8
Could Chirrut Îmwe have constructed a lightsaber out of Jyn’s kyber crystal?