Why do Gallifreyans use Swastikas on their clothing?

Why do the Gallifreyans use the Swastika insignia on their clothing?

The Day of The Doctor features a sequence where the Doctor(s) decide whether or not to use the Moment to destroy Gallifrey, thus ending the Time War.

During this decision there are a number of overlay sequences which show the various citizens of Gallifrey taking cover from the war.

Some of the people within this sequence seem to have a Swastika insignia on their clothing: 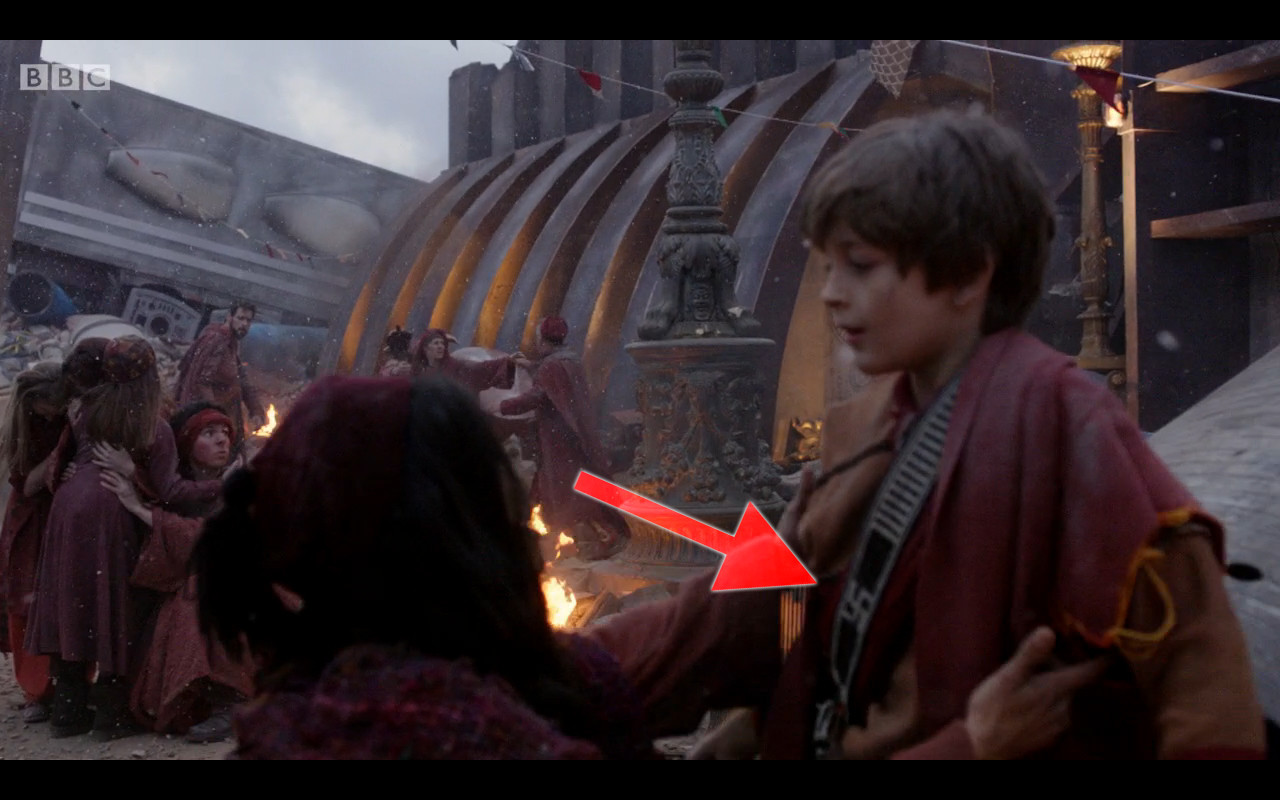 It may just be a costume quirk, but it seems bizarre that such a loaded piece of iconography would be associated to the Time Lords by accident.

Is there a precedent, or reason for this in any of the Doctor Who timeline?

I know the symbol comes from a very different culture and has alternative etymology, but to modern audience the Swastika is synonymous with the Nazi Party first and foremost, and the program makers must be aware that this is the case...

The swastika is a symbol that long pre-dates the Nazis.

Hindus, Buddists, and Jains have used the symbol long before World War II, and will likely continue to use it long after. Note also the direction of the swastika (facing the left) is indicative of its Hindu origins, and not the right-ward facing Hakenkreuz of the Nazis.

The fact that it arose in cultures as disparate as Indians, Chinese, Africans, and even the Celts shows that it would be a symbol that need not be earth-centric.

But, as a symbol associated with peace and rebirth, it actually makes sense for the Gallifreyans to use it.

To be honest, I didn't even notice it while watching the episode.

Is it intentional? I don't think anyone can answer this without speculating, unless being part of the crew (and even then... take River Song's background as an example: even the staff has been lied to).

If this was intentional, it could be that before the Nazis adopted the swastika as their symbol it was a Hindu sign of peace and spirituality. So it could have been put in there as the Hindu symbol.

Perhaps to place the moral conflict inherent in the Doctor's decision - killing children (bad) to end a war (good) - in a context we can relate to? Having the boy wear a swastika perhaps references acts such as the Allied bombing of German towns, which inevitably caused civilian deaths but were arguably justified in terms of bringing a quicker end to WWII.

This doesn't explain why the production team would be so subtle though. I (and probably most of the audience) entirely missed the symbol, and therefore any symbolism.

Merely speculation but... Movie and TV shows often include semi-subliminal information in an effort to evoke an emotion in the viewer, your senses are 'filtered' through the amygdala before the hippocampus. This is why a person who is afraid of snakes may initially be scared of a snake-like stick before the brain has fully processed the image. The inclusion of emotionally charged symbols can help the emotional brain pre-consciously assess the circumstances in a story quicker than by conscious processing alone thereby bringing the state of mind the author wishes the audience to have.
OR They were saving on the costume budget by recycling from a WW2 show. Happens all the time.

It was symbolic of what the Time Lords had become during the war, it was also exactly why the Doctor hated it all and didn't want to get involved. And the reason the pilot let herself get killed instead of going with the 8th Doctor. Hell, the leaders wanted to purify themselves and become energy or whatever.

The symbol also has roots in pre-Christian Germanic tribal groups and in esoteric occultism, which the Nazi leaders were obsessed with before gaining power. And then choosing to reflect a more Christian image. The black sun would be another example, you can find a description here.

Not the answer you're looking for? Browse other questions tagged doctor-who costume or ask your own question.

12
Are all Gallifreyans able to regenerate?
9
What is the inspiration for 11th Doctor clothing style?
5
Why don't future humans use nano-genes?
14
How do Time lords/Gallifreyans breed, and can they do so with humans?
36
“Time Lords” and “Gallifreyans”. What's the difference?
3
Can Gallifreyans regenerate their head?
9
How do superheroes stay cool in their costumes?
5
Are Gallifreyans reptiles, mammals, or something else?
24
Is regeneration unique to Time Lords or can all Gallifreyans do it?