Are we sure about the regeneration order of the Doctor?

In The Day of the Doctor, we learn about a new Doctor, aka the "War Doctor", who fit somewhere before the Ninth Doctor (Christopher Eccleston).

At the end of the episode, we also saw the War Doctor regenerating, but we don't see into which incarnation of the Doctor he regenerates.

Could the incarnation order be rearranged in some way so the Eleventh Doctor become the Fifth or something like that?

Two things in The Day of the Doctor strongly suggest that John Hurt regenerates into Christopher Eccleston: 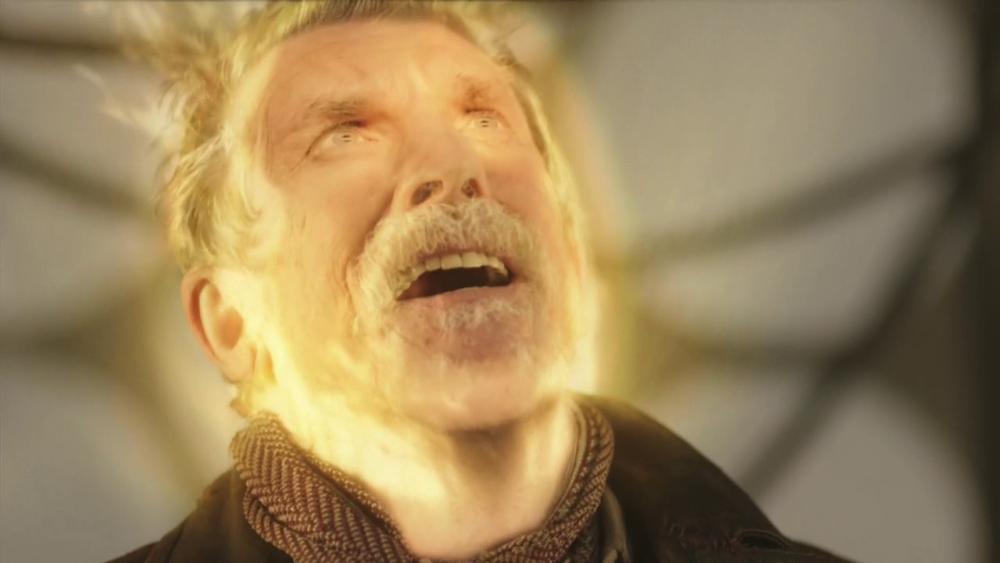 In Doctor Who (1996) we saw McCoy regenerate into McGann, and in the minisode The Night of the Doctor we (effectively) saw McGann regenerate into Hurt, so seven (McCoy) through thirteen (Capaldi) are locked down.

As for the original series Doctors, I’m not familiar with that run of the show, but @Micah’s answer (reward it with many upvotes!) states that the only missing regeneration is that from Troughton to Pertwee: Troughton's Doctor dies at the end of The War Games, and the beginning of Spearhead from Space shows Pertwee emerging from the TARDIS. So, in theory more Doctors could be fitted in between Troughton and Perwee, but even Steven Moffat might have a hard time looping a later Doctor like Matt Smith back through the eye of that particular needle.

(Also, technically, Colin Baker wasn't present for the regeneration to McCoy; instead, McCoy wore a blonde wig and was only shot from behind.)

There is one classic-era regeneration that's not shown on screen: the one in which the Second Doctor regenerates into the Third. As tardis.wiki.com says:

...the regeneration of the Second Doctor (played by Patrick Troughton) into the Third Doctor (played by Jon Pertwee) was never explicitly shown on television - although the Second Doctor's face is shown beginning to change and contort, and then disappear, as he spins away into the void. Instead, viewers were left only with the impression that the Doctor had been sentenced to two fates: enforced regeneration and exile on Earth.

This occurs at the end of season 6; at the beginning of season 7, the Doctor has in fact regenerated and been exiled. However, several discrepancies (mostly in later multi-Doctor episodes where the Second Doctor appeared to be older and to have more knowledge than he ever had in his ordinary tenure) led to speculation that this sentence had been delayed for a time, and he had continued adventuring throughout a "Season 6B". This speculation eventually made its way into several spinoff novels, so if you take those as part of your Doctor Who canon you can consider it verified.

All the other classic-era regenerations happened on screen. The only other anomaly is that when the Sixth Doctor regenerated into the Seventh, Colin Baker had already left the show, and so Sylvester McCoy played both. But he clearly is playing the Sixth Doctor and not some unspecified intermediate regeneration.

To the best of my knowledge, nobody ever seems to have considered inserting extra regenerations into season 6B, but if you wanted to add them anywhere that would be the place to do it. Moreover, since all the other regenerations are locked down, you couldn't change the order of the currently-existing Doctors, just insert new ones.

1) "The Time of the Doctor" states that the Eleventh Doctor is on his final regeneration from the first cycle. All the other regenerations from that cycle are accounted for. So if there's an extra season 6B Doctor, or any other unknown doctor in the pre-Trenzalore era, the Doctor must also have gotten an extra regeneration or two from somewhere, or at least be mistaken about Tennant's handy regeneration at the beginning of "Journey's End".

2) "The Day of the Doctor" strongly implies that the Doctor will eventually regenerate back into Tom Baker. If this is a possibility, it's difficult to completely rule out the idea that the Doctor regenerates into some form we've never seen before, but then regenerates back again into their previous form. However, because of point 1), this would probably have to be post-Trenzalore (Capaldi -> unknown -> Capaldi or Whittaker -> unknown -> Whittaker).

So, in possible order then:

I have seen this question a lot. Yes, John Hurt regenerates into Christopher Eccleson. The other regenerations are the same. John Hurt is called The War Doctor, or Doctor number 8.5 as I've seen before. My theory is that the Doctor regenerated into that form of the Doctor just for the Last Great Time War. No, the Eleventh Doctor doesn't become the fifth. It gets even more confusing because the Tenth Doctor regenerated twice. Once into himself again, and the second time into Eleven.

The Doctor's causes of regeneration:

1st: Was apparently growing weak from old age. He collapsed from exhaustion while battling the Cybermen on Mondas.

2nd: The Time Lords punished the Doctor for breaking their laws of non-interference by forcing him to regenerate into his next incarnation.

3rd: "Died" from the effects of extreme radiation poisoning caused by the Great One's web of Metebelis crystals. Fellow Time Lord, K'anpo Rimpoche saved the Doctor's life by kick starting the regeneration process, which caused him to change into his 4th incarnation.

Regenerated: Planet of the Spiders

4th: The Master indirectly caused the Doctor to fall from the top of the Pharos Project tower, causing him fatal damage. As he lay injured and dying, the Watcher (a being thought to represent something between the Doctor's 4th and 5th incarnations) merged with the Doctor and saved his life by transforming him into his next incarnation.

5th: After dropping the contents of the antidote for the pathogen, Spectrox Toxaemia, the Doctor saved Peri Brown by giving her the last vial. He then succumbed to the effects of the disease and regenerated.

Regenerated: The Caves of Androzani

First Appearance: The Caves of Androzani

Regenerated: Time and the Rani

7th: Somehow regenerated in a San Francisco hospital's morgue hours after surgeon Grace Holloway, accidentally killed him with anaesthetic and a probe while trying to fix his "heart problem".

First Appearance: Time and the Rani

8th: Was killed when the spaceship he was on crashed landed on the Gallifreyan colonial planet called Karn. He was brought back from the brink of death by the Sisterhood of Karn, and regenerated into the War Doctor by drinking a specialised Elixir of Life, so he could fight in the Last Great Time War.

Regenerated: The Night of the Doctor

Warrior: After centuries of fighting in the Time War and time locking Gallifrey along with his twelve other incarnations, the War Doctor regenerated after apparently "wearing a bit thin".

First Appearance: The Name of the Doctor

Regenerated: The Day of the Doctor

Regenerated: The Parting of the Ways

10th (11th regeneration): Regenerated and healed his body after nearly dying from being grazed by a Dalek's laser beam. Avoided the change into what would have potentially been his 12th incarnation in the nick of time, by directing the transformative energy of the process into his spare hand.

10th (12th regeneration): The Doctor locked himself in a radiation booth and absorbed an amount of rads that would've instantly killed an ordinary man. Held back the process in order to bid a final farewell to his former companions. He eventually regenerated (which destroyed the TARDIS console room) into his 13th incarnation.

First Appearance: The Parting of the Ways

Regenerated: The Stolen Earth/Journey's End, and The End of Time: Part 2

11th: After a near millennia of protecting the people of Trenzalore from many of his old enemies, the Doctor was given a second regeneration cycle by the Time Lords, just as he gave up his life. He used the energy to utterly destroy the Daleks and their entire fleet before returning to the TARDIS in the form of a young man. With the process in its final phase, the Doctor accepted he was always going to be the same person deep down, no matter how many times he changed. He then became a new man a thirteenth time (but regenerated a 13th time), becoming the 12th Doctor.

Regenerated: The Time of the Doctor

Compelling evidence that John Hurt's doctor regenerated into Eccleston's is that he was the first to have Rose Tyler as a companion. Since Hurt's doctor was in connection with the Bad Wolf Rose it is possible that some force (universe, TARDIS, or Bad Wolf herself) brought Eccleston's doctor and Rose together even though he forgot the events after his regeneration.

-4
In Doctor who how many times did he regen
23
Was the War Doctor originally intended to be Christopher Eccleston?
5
Should the doctors enumeration be changed?
-1
The argument of regenerations

7
Are The Doctor’s previous personalities preserved within each new incarnation?
23
Was the War Doctor originally intended to be Christopher Eccleston?
21
Why does the War Doctor regenerate?
10
Why didn’t the Doctor give Rose some regeneration energy?
26
Why did The Doctor become Gollum-like creature when The Master increased his age to 900 years?
5
How much could the Fifth Doctor remember from Time Crash?
12
Why didn't the Doctor become a vengeful God when he absorbed the Time Vortex?