Does anyone remember a 60s or 70s UK sci-fi show with rocks moving in the children's back yard?

I remember being freaked out by a UK sci-fi show where children looked out of the top window and saw rocks that were in their back yard. When they looked away the rocks moved.

I seem to recall there was a portal that they traveled through that was in the hedge or at the bottom of the garden.

Does this ring any bells for anyone?

Pretty sure you're looking for Children of the Stones

It was a 7 episode children's series first broadcast in 1977.

I was looking for a similar show and finally found it called "Escape into Night" based on a book called Marianne Dreams. It's all on YouTube , so you can see if this is the one. It was really creepy as a kid.

It’s a no frills set-up – the eponymous Marianne, slightly spoilt daughter of a long suffering patrician mother, is laid up in bed after falling off a horse, and amuses herself drawing a house with a pencil of dubious antiquity. Said house comes to wonky, ominous life in her dreams, containing nothing but stroppy, pyjamaed Mark, who may exist in real life as the bed-bound fellow pupil of Marianne’s private tutor. Cue lots of arguments, tantrums and ill-advised drawn additions to the house making the situation worse: a scribble turns to bars on the window, a radio proves to be all sinister static and Bakelite, and most infamously of all, a row of murmuring, monocular standing stones are slowly advancing up the garden path to the house. Eventually of course, the two kids bury their differences, help each other out, and worthy lessons about co-operation, tolerance, stoicism and not being a spoiled git are learnt. But, we would point out, these effects were all but dwarfed by the amount of juvenile pant-wetting occasioned by the appearance of those stones. 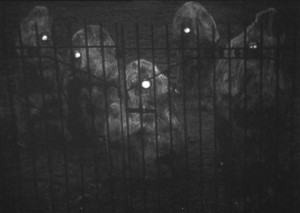 8
Sci-fi type of show where a guy traveled in search of his wife and helped solve paranormal cases along the way
4
Help identifying a film involving people living in regulated areas of the planet, get shot if they try to escape
6
Storyline involving killer robots that harvest legs
8
Post apocalyptic comic with giant traveling worm-like train of people that everyone fights to be on top of
15
1970's sci-fi anthology featuring a helmeted woman with a tiny, crustacean-like body on the cover?
4
Pre-1979 hard sci-fi children's or YA book with boxy functional spaceships
4
Sci-fi show where humans defeat giants, then learn that they're children
6
Stop motion sci-fi kids show
18
Old kids show from the 80's about two kids with a magical compass that took them to another world
9
Parallel universe where an engineered bacterium consumes all petroleum