What happens to Robert Fischer in the limbo and third level dream states?

Something I don't get in the movie Inception:

That means he goes to "limbo" (following dream logic here) but after Cobb and Ariadne retrieve him from limbo, he is kicked back to the third level while Eames kick-starts his heart with a defibrillator and he is alive again. Thus he goes ahead to complete the inception.

Putting aside that I'm pretty sure a defibrillator can't bring someone back to life after two gunshots to the chest, or even that he appears to be in no pain or dying from blood loss then how does Robert Fischer come back to life in the third level when he has already died in that level?

I think the shooting script gives a bit more clarity on the subject. I've edited and abridged for ease of reading...

COBB : It won't do any good

COBB : Even if you could revive his body, his mind's trapped down there. It's over.

ARIADNE : There's still a way: We follow Fischer down... We'll find him...soon as you hear Arthur's music start, you use the defibrillator to revive him...we give him his own early kick from below.

Ariadne KICKS Fischer off the roof- AIMS again at Mal- Fischer DROPS as the sky LIGHTS UP WITH ELECTRICITY- Fischer SCREAMS, then GASPS, no longer falling, and we are....

Eames pulls the defibrillator from Fischer's chest as he COUGHS AWAKE.

Fischer looks up at the double doors. STAGGERS to his feet.

Basically they give him a kick in the limbo level by chucking him off the ledge. This moves his consciousness back up to the third level. At the same time Eames uses the defibrillator to restart his heart and his body magically repairs itself when his consciousness arrives (dream bodies can do that, apparently) allowing him to complete his own inception.

Fischer is not yet dead, he's in a temporal state in the Limbo. Cobb and Ariadne go one level below using the device that is connected to Fischer. To get the person up one level, a pair of kicks are required.

For Fischer, in the Limbo, Ariadne throws him off and Eames uses the Defibrillator. This pair helps Fischer get up one dream level.

Here's the description of the pair of kicks for each of them: 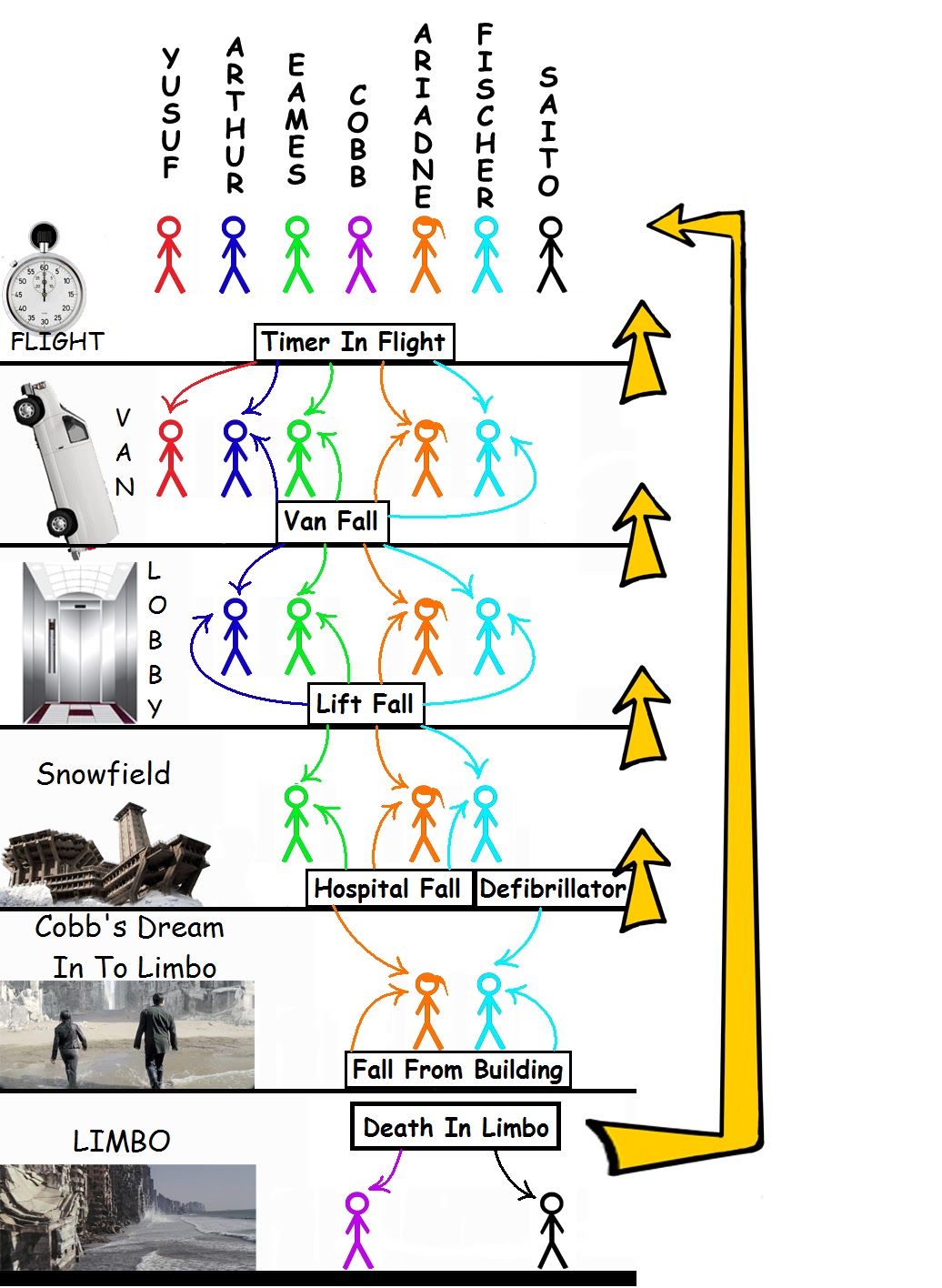 Here you can find more info on the kick pairs and why a pair is needed and not one kick alone: Inception Kicks Explained

Not the answer you're looking for? Browse other questions tagged inception or ask your own question.

12
How is it that Robert Fisher could have been killed by his own projections?

17
In Inception why does the music played not slow down in each successive dream level?
12
Why did Cobb ask Ariadne for the secret passage in the third-level dream?
1
What happens if you die in a dream before you die in the dream within?
10
Why didn't the team wake up from the multi-level kick?
7
Why was Cobb so afraid to go into limbo, if he had already gone there and knows that he can use his totem to get out?
5
Why does Cobb and Ariadne remember their mission once they drop into limbo to fischer?
8
In Inception, how does the machine determine who are the Dreamer and Subject?
2
Who was Maurice Fischer in the third-level dream?