How much power does Iron Man's Mark 42 suit need?

In Iron Man 3 movie, I saw that Mark 42 suit was being recharged with domestic electricity. And within less than a day, it was ready for action.

How much power does Iron Man's Mark 42 suit really need?

According to the Iron Man Wikia (based on details found on the "official JARVIS iPhone App) The Mark 42 "Prehensile" Suit is made from; 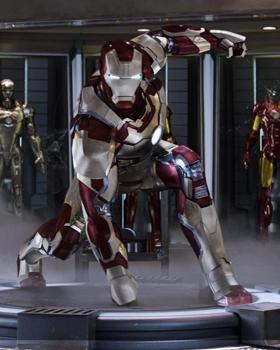 In the film Iron Man 3, when the Mark 42's battery falls below a charge of 5% the main systems (engines, computers, AI) all fail pretty much simultaneously. After approximate 8-12 hours of continual charging off of a 110v plug socket (and a further 1 hour charging off a boat's generator) the suit is combat ready at 92% charge. It's able to survive until the end of the film without the need to recharge further. Since the maximum wattage you can normally get from a normal US household outlet is 2400W then multiplying this by 9-13 hours shows that 21.6-31.2 kWh is clearly the amount of energy needed to charge the suit.

That said, in the film Iron Man 1, Tony Stark states that his chest reactor is capable of generating 3 gigajoules per second

Yinsen: What will it generate?

Tony Stark: If my math is right - and it always is - three gigajoules per second.

Since 3 Gigajoules per second is equivalent to 3 Gigawatts (over a million times more power than could be drawn from a standard electrical outlet) it would suggest that he's made vast improvements in suit power efficiency between Mark 1 and Mark 42.

Furthermore we can assume that the long-distance flight carrying Stark (2000+ miles travelling subsonically at approx 700MPH?) was the major drain on the power capabilities of the suit since it operates at full efficiency despite performing the same feats that drained it originally.

43
Did the Iron Man suit come from HYDRA's technology?
56
Why did Tony Stark build arc reactors into his extra Iron Man suits?
41
How much did Iron Man's suitcase weigh?
18
Is Iron Man’s suit really heavy enough to break through his roof?
1
How can Iron Man's repulsor gauntlet work after Thor crushes it?
4
In Iron Man 2 why was Vanko's suit able to match Tony's?
3
Has Iron Man ever had a suit without flight, and if so, how effective was it?