What is the order/timeline for Neal Asher's "Polity" novels?

I just finished Brass Man by Neal Asher. I'm hooked and have a couple of questions on the "Polity" novels:

Is there a preferred order to the novels (publication? internal timeline? other?)

Neal Asher's web site has a link to a graphical representation of the order of the books. I have uploaded it here: 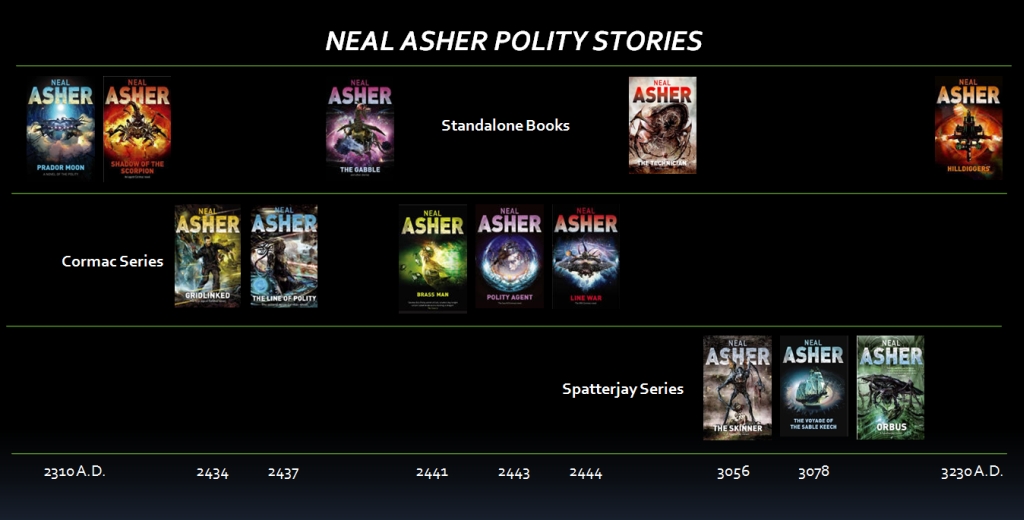 For the reading order, I would go with the time line of book publication.

The graphical timeline posted previously has been great, though it has sadly gotten outdated. So, I've modified/updated it to include the newer books (credit goes to the original creator of the graphical timeline, though I don't know exactly who that is):

As for the reading order, there are a lot of opinions out there... even an interview with the author still didn't conclude on an exact reading order (see: https://theskinner.blogspot.com/2020/04/where-do-i-start.html ). But after much discussing the matter with other Asher readers, it has become apparent that the publishing order is basically the way to go. The main reason for this is that Asher has a tendency to drop potential spoilers if you read the books in chronological order. The only way to avoid getting hit by a spoiler bomb is to basically go with the publish date order. Now, I say "basically" since Asher has written many of the standalone books before finishing some of the series... and he has also written some series at the same time, back and forth. So, the reading order below reflects the best place to read the series and standalone books while trying to keep as close to the publication order as possible:

Besides all the above, there is a couple other books to consider that were published before any of the previous works (the first published of the above was the Cormac series book #1: Gridlinked (2001)):

This is one hell of a series. The Cormac books must be read first starting with Gridlinked. then drop back to start at the beginning of the timeline - the gabble can be read at the end as it references all the books and characters in the whole timeline. The Skinner is quite basic in the technologies Neal invented as he went through the writing process but the action sure makes up for that. Enjoy. Also try Peter F Hamilton's books if you like this series - though much more techfest than splatterpunk

Having read Gridlinked, I think that it is the one to start with for his Cormac novels, which also takes place in the polity universe. Amazon also says it is "Ian Cormac Book 1".

It now appears that The Owner series are also Polity books. So you could consider them prequels.

Never mind. Turns out the cover of "Departure" was a mockup of another Asher book and they forgot to remove the "Polity novel" part.

Not the answer you're looking for? Browse other questions tagged suggested-order polity-universe or ask your own question.