Why don't Jedi (or Sith) use the Force to snap their foes' necks?

I understand that the Jedi use the Force for self defence, but still, couldn't they just use the Force to snap their foes' necks and be done with it? Like when Jaina Solo was hunting down Darth Caedus. Or even when Caedus was duelling Grand Master Skywalker. If he just used the Force to snap Skywalker's neck (like he did to poor Lieutenant Tebut), it will all be over very fast.

Is there a canon reason why Jedi and Sith don't use their powers to directly harm their opponents?

There is at least one case of a Dark Jedi using the Force to snap an enemy's neck; in the novel The New Rebellion, Kueller snaps his traitorous second-in-command Femor's neck in front of his troops as a display of his power. This is shown as being difficult for him to do, however - though Kueller forces himself to show none of this difficulty at the time, he was sweating profusely from the effort involved - and Femor was not Force-sensitive, and completely incapable of defending herself.

One would imagine, therefore, that snapping the neck of a Force-sensitive individual would be considerably harder, and there wouldn't be much of a point. Kueller only broke Femor's neck as a message to his jittery troops not to turn on him. When he later duelled with Luke Skywalker, he did not make any such attempt, as the effort he would expend to snap Skywalker's neck is less than the effort Skywalker would expend simply holding Kueller off for a few seconds while he used the Force to impale the younger man on his lightsaber, or smack Kueller in the head with a flying brick.

Think about it this way; in a physical confrontation, it is very unlikely for a person to die from a broken neck. Beating, stabbing or choking a person to death is far more common. Why should using the Force be any different? Especially as the Force gives one an innate "danger sense" that virtually eliminates the possibility of a sneak attack to break an opponent's neck.

One of the better stories in Star Wars: Tales centered around a man hunting down a Sith who had amnesia. My favorite part is where the Sith is using the force to cheat at gambling, and the entire bar full of patrons gets aggressive when he's found out.

The Sith is very matter-of-fact about the whole situation, and announces that every humanoid species in the galaxy has an artery - or something similar - that, when closed off, causes instant paralysis & death. He then demonstrates by killing almost everything in the place with a hand gesture.

Although we never saw anything close in the movies, this single moment (for me) defines why Jedi & Sith are so feared and considered so dangerous.

The Tales comics aren't considered canon, however. There were a few cases in the games where a Sith or Dark Jedi broke someone's neck using the Force, but I'm not sure what canon level the games are considered at these days. As mentioned above, doing it to an alert Jedi or Sith is probably a different story altogether.

UPDATE: I finally found this story again - it's called "Nomad" and it's featured in Star Wars: Tales #21-#24 (or TPB Volume 6). The Dark Jedi in question was named Lycan.

It’s worth noting that there are several obvious reasons that Force users rarely use the Force to snap their opponents necks in combat:

All that said, though, the Force can certainly be used to snap someone’s neck, as we see in Star Wars #2. 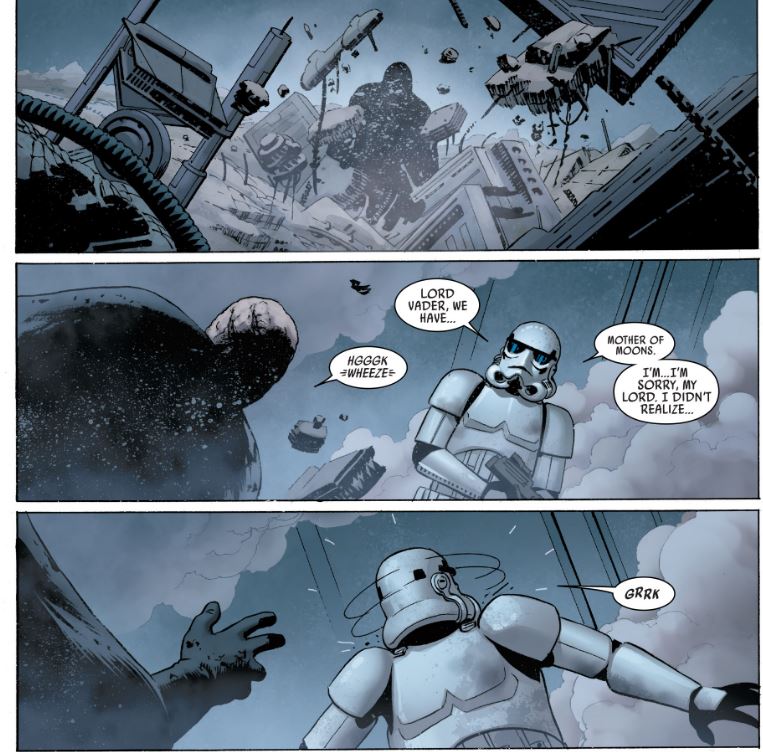 The Force can also be used to kill people in other interesting ways. For example, Vader used the Force to, most likely, crush the heart of a wayward Imperial prefect:

Vader came to an abrupt stop, scanning his audience and certainly sending shivers of fear through everyone—Toydarian, Dug, and Devaronian alike. As his raised right hand curled slowly into a fist, many of them began nervously tugging at the collars of their tunics and cloaks. But it was the Twi’lek prefect, standing not a meter from the Dark Lord, who unexpectedly gasped and brought his hands to his chest as if he had just taken a spear to the heart. Phoca Soot’s lekku shot straight out from the sides of his head as if he were being electrocuted, and he collapsed to his knees in obvious agony, his breath caught in his throat and blood vessels in his head-tails beginning to rupture. His eyes glazed over and his red skin began to pale; then his arms flew back from his chest as if in an act of desperate supplication, and he tipped backward, the left side of his head slamming hard against the blood-slicked floor.

Vader crossed his thick arms across the illuminated indicators of the chest plate. “A pity. Tasked with controlling crime in his sector, he succumbed to temptation by hiring himself out to the Droid Gotra.”

Both the examples are against non-Force-users, adding yet more evidence that such techniques are generally ineffective against Force users, due to their ability to counter them.

In the canon comic book Skywalker Strikes, Darth Vader in fact snaps the neck of a stormtrooper that saw him unmasked.

Its difficult to utilize these force powers when in the middle of combat, where everything is happening so fast. Luke is too powerful an opponent for Caedus to do that to anyway. Luke could block that ability or even turn it against Caedus. When Caedus unleashed a Force Wave on Luke, it only pushed him back and a Force Wave could destroy a group of mechanical battle droids.

Vader snaps the neck of a stormtrooper who sees his face in one of the first few issues of the canon marvel Vader comic. Twists his head around. It is much harder to do to a force user because they protect themselves both consciously and unconsciously

Not the answer you're looking for? Browse other questions tagged star-wars jedi the-force sith or ask your own question.

9
Why is the "Force-Choke" the only form of precise attack involving the force and specific body areas?
6
Why are Force users limited in their telekinetic attacks?
3
Why doesn’t Obi-Wan Kenobi use the Force more?
27
Why didn't the Jedi/Sith use Force pull/push in the generator complex?
7
Why not use the Force to pop a vein?
9
Why didn't Obi-Wan use more Force powers when he fought General Grievous?
3
Jedi/Sith using force in combat with other Jedi/Sith?
1
What is stopping a Sith/Jedi from turning an opponent's brain to mush inside his skull?

25
Why Do the Midichlorians Work with the Sith?
18
Could several Jedi peacefully overpower one Sith opponent through nonviolent Force techniques?
7
Jedi: What is their Overarching Purpose?
5
Was ruling the galaxy a necessary objective for the Sith?
1
Are young Jedi more in tune with the Force than Sith and older Jedi?
3
Force Sensitivity: How much potential in the Force can a human be born with naturally? (Legends or Canon Material)
1
Why do Jedi/Sith play a huge role in shaping the galaxy when the Force doesn't seem that powerful?