Who was the Hedwig in “A history of Magic”?

He had decided to call her Hedwig, a name he had found in A History of Magic. (Harry Potter and the Philosopher's Stone, Chapter 6)

Is there any canon info on who that Hedwig was in-universe? HP Lexicon mentions that it was a out-of-universe saint.

Hedwig is named after Saint Hedwig

During an interview that she conducted in 2000, JK Rowling identified the root of many names used in the HP canon;

How do you come up with all the unique names, places, and things that help make Harry Potter so intriguing? 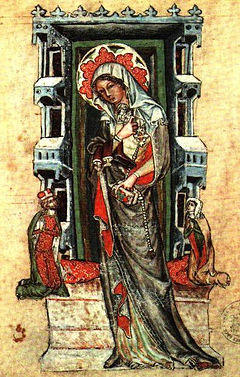 In-universe, there's no canon explanation why "Saint Hedwig" would be included the "History of Magic" (possibly a famous half-blood wizard or witch grew up in one of the literally hundreds of St Hedwig's monasteries and orphanages around the world) but it's hardly surprising that Harry would gravitate toward the name of someone famed for caring for people who'd lost their parents.

13
Is it ever explained why Harry has to cage Hedwig when he travels?
7
Why not hide the Philosopher's/Sorcerer's Stone with a Fidelius Charm?
22
How did Hedwig know the Dursleys would have a Christmas present for Harry?
9
How old was Nicolas Flamel really?
3
Did any Hogwarts Professor ever forget their student's name?
32
Who were the witch and the wizard who spotted Harry Potter during his time with the Dursleys?
34
Who wrote Hogwarts: A History?
107
Did Dumbledore consider the implications of leaving a baby on a doorstep overnight?
1
In Harry Potter and the Philospher's (Sorcerer's) Stone, why didn't they send Hedwig to Dumbledore instead of going after Snape (Quirrell)?