What is the American school of magic?

Like Beauxbatons or Durmstrang, but in America. I always thought it was the Salem Witches' Institute because of a few sentences in Harry Potter and the Goblet of Fire, but the Institute seemed to be more of the type where grown witches belonged to a society or whatever, so I'm not sure. I'm looking for a more definitive answer, although if mine is right, please tell me so so I can stop wondering.

Also, are there multiple schools? It seems likely for there to be more than one.

In an interview with Rowling she states that American wizards have their own school, and that it is mentioned in the fourth book. (http://www.accio-quote.org/articles/2000/0700-swns-alfie.htm)

In the fourth book, the Goblet of Fire, is when the Salem Witches' Institute is referred too, leading us to believe that yes the SWI is in fact the American wizarding school. This is just a speculated answer but is in my opinion a pretty reliable reason to believe that it is meant to be an assumed cannon fact by Rowling.

In an interview, JK Rowling confirmed that the Americans have a separate school:

Can American kids go to Hogwarts?

No, they have their own school. You'll find out in Book 4. Hogwarts just serves Britain and Ireland.

For a long time this was presumed to be the Salem Witches’ Institute, but apparently that was just a joke about the Women’s Institute.

Information about the school has trickled out in dribs and drabs, in anticipation of the Fantastic Beasts and Where to Find Them film. What we know:

There’s a school in Brazil (which gets mentioned in Goblet of Fire – Bill used to have a pen-pal there). The name is Castelobruxo, and according to Pottermore, it serves all of South America:

The Brazilian school for magic, which takes students from all over South America, may be found hidden deep within the rainforest.

The implication is that it’s the only school on that continent.

At the recent HP celebration, JKR announced that the North American wizarding school is named Ilvermorny.

Based on the map on display at the celebration, the school appears to be located in Canada. 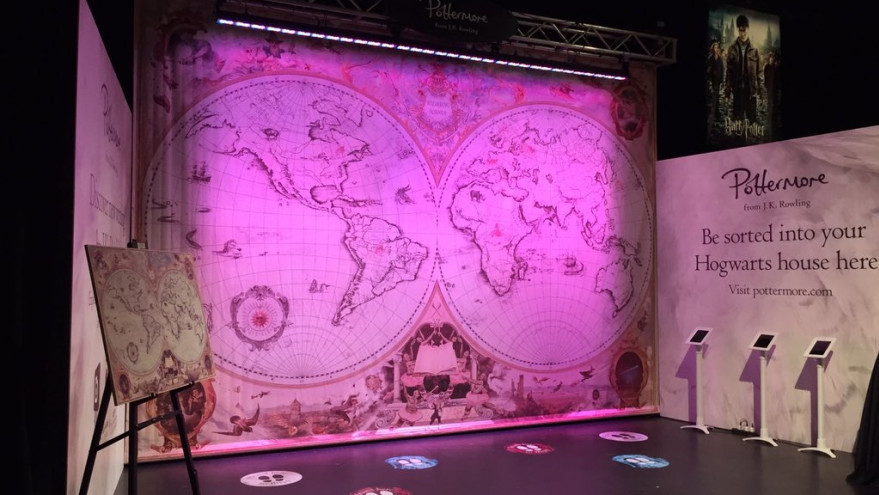 Unfortunately, at the moment, there is no other information about the school.

The South American school, located in Brazil, is named Castelbruxo.

The North American wizarding school is called Ilvermorny. It is mentioned in Fantastic Beasts and Where to Find Them, and is the school that Tina and Queenie Goldstein attended.

“JACOB
(putting on his jacket)

Did you say school? Is there a school? A wizardry school here? In America?

QUEENIE
Of course – Ilvermorny! It’s only the best wizard school in the whole world!”
- Fantastic Beasts and Where to Find Them: The Original Screenplay

It is located on Mount Greylock, Massachusetts, in the United States.

The great North American school of magic was founded in the seventeenth century. It stands at the highest peak of Mount Greylock, where it is concealed from non-magic gaze by a variety of powerful enchantments, which sometimes manifest in a wreath of misty cloud.
- Ilvermorny School of Witchcraft and Wizardry (wizardingworld.com)

It takes children from all over North America, so presumably this also means that it is the main wizarding school for Canada, the United States of America, and Mexico.

Ilvermorny’s reputation grew steadily throughout the following years. The granite house expanded to a castle. More teachers were recruited to meet the growing demand. Now witch and wizard children from all over North America were being sent to learn there and it became a boarding school. By the nineteenth century, Ilvermorny had gained the international reputation it enjoys today.
- Ilvermorny School of Witchcraft and Wizardry (wizardingworld.com)

A wizarding school in Brazil is first mentioned, but the name is not given, in Harry Potter and the Goblet of Fire.

‘’Spect they go to some foreign school,’ said Ron. ‘I know there are others, never met anyone who went to one though. Bill had a pen-friend at a school in Brazil … this was years and years ago … and he wanted to go on an exchange trip but Mum and Dad couldn’t afford it.”
- Harry Potter and the Goblet of Fire, Chapter 7 (Bagman and Crouch)

Later, a Pottermore writing states that Castelobruxo, the South American wizarding school is in the Brazilian rainforest, and it takes students from all over South America.

The Brazilian school for magic, which takes students from all over South America, may be found hidden deep within the rainforest. The fabulous castle appears to be a ruin to the few Muggle eyes that have ever fallen upon it (a trick shared by Hogwarts; opinion is divided on who got the idea from whom). Castelobruxo is an imposing square edifice of golden rock, often compared to a temple. Both building and grounds are protected by the Caipora, small and furry spirit-beings who are extraordinarily mischievous and tricky, and who emerge under cover of night to watch over the students and the creatures who live in the forest.
- Castelobruxo (wizardingworld.com)

30
Are there wizarding schools in the rest of the "magical" world?

8
Did Voldemort Use Fiendfyre Against Dumbledore?
29
What is the difference between the Confundus Charm and the Imperius Curse?
27
Wouldn't Aunt Petunia know that Harry couldn't use magic outside school?
11
Does the Riddikulus charm require laughs to repel a Boggart?
17
What language were Durmstrang classes taught in?
4
Are American witches and wizards forbidden to use magic before Ilvermorny?
15
Why wasn't the "American Ministry of Magic" given its correct title?