I am pretty sure I read it in the mid-80's. The plot elements which I remember:

It seems to me that the book was divided into two sections named 'Genesis' and 'Exodus'. The first section deals with the boy coming to a realization of the situation and his attempts to convince others. The second was their escape and attempt to start anew.

This may have been in a collection of short-stories.

It is not the Tripod series, although similar in many ways.

I think you mean Nick Sagan's Idlewild trilogy. It's 2 decades later than you put it though -- first published in 2003.

Idlewild : It is a not-too-distant future in our all-too-recognizable world. It is the late twenty-first century and a deadly virus has seeped into human kind's genetic make-up. Eighteen years later and ten individuals are about to come of age. One of them, a young man, is suddenly startled awake. He has no memory. His surroundings mean nothing to him. All he knows for certain is that someone is trying to kill him. Unsure who he can trust, he is reacquainted with his companions, all of whom are being trained at a special establishment run by the elusive Maestro. As he tries to uncover the identity of his would-be killer, it becomes clear that more - so much more - than just his life is at stake . . .

EdenBorn : A bitter and disillusioned Halloween has chosen to exile himself but his peers seek to repopulate the Earth and rebuild civilization. They are mankind's last, best and perhaps only hope. However an ideological split has divided them into two very different societies: one looks to resurrect the human race, the other to improve humanity via genetic manipulation. So a new generation of children is born, but as they mature it becomes clear that all is not well. Someone - or something - is moving against them, even as Black Ep, the plague that claimed billions of lives, returns in search of new victims. The survivors must work together, but to save the future Halloween must first let go of the past... 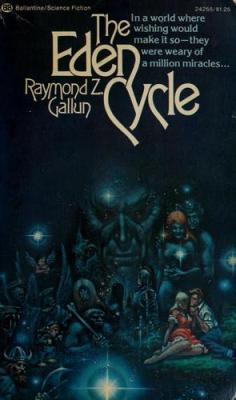 Could this be "The Eden Cycle" by Raymond Z. Gallun?

Reviews are scarce. Here are some excerpts, beginning with the overall concept:

[The story deals with] the social ramifications of a future world where everyone, “blessed” with immortality, can “live” in any virtual reality of their choice, shift from simulation to simulation at will, and spontaneously conjure new ones.

There are similarities to the plot you recall; there are differences as well. For instance, here it's the girl who first realizes/discovers the truth. One reviewer has this to say:

The story starts off in what appears to be a small town right before the Great Depression. Two kids. A boy and a girl. Growing up. Falling in love... Then, the girl starts to think that nothing in their lives is actually real. She starts having these dreams and impressions that it's all just an illusion, and when she talks to the boy about it all, he starts to agree with her, and together, they will themselves out of their reality, instantaneously to a beach in a virtual but real-seeming Hawaii.

This introduction reveals the character names and their location:

The plot follows Joey Martin and his love interest Jennie Murray as they slowly come to realize that the world they live in, small town Purdyville, is actually a simulation.

They uncover more details about the world(s) they live in:

Before long, they learn that they've been alive for hundreds or maybe thousands of years, living countless virtual lives within a huge virtual system the instructions of which were radioed to the earth by an alien civilization.

How the system operates:

Now, almost every human has had his and her identities transferred into tiny, shimmering balls, and within those balls, people have the power to do anything, go anywhere, do whatever they want, in the virtual past, the virtual future, with superpowers, immortality, et cetera, with it all seeming perfectly real.

This segment delves further into these simulated lives:

If you get tired of a virtual reality, one can simply transfer to another. If you want to find another “real” individual (or meet up with one you met earlier) then simply wish to find them — if they want to find you, then the wish will be fulfilled. If you want to violate all laws, fly through space... If you want to have your memories wiped and relive any life, then simply wish that at a certain point the memories will be returned. Or, in the most drastic manner, simply wish away your memories all together. If you die in a simulation then you’ll simply be transfered to another.

~ Edited from Science Fiction and Other Suspect Ruminations and The Skeptics Guide to the Universe.

Another plot point which differs from the storyline you've posted. Once you've gone through the full reviews, you'll understand that the AI (Eden Machine) in the book hasn't actually subjugated humanity. Humans are willing participants.

Not the answer you're looking for? Browse other questions tagged story-identification dystopia artificial-intelligence or ask your own question.

20
Trying to remember the name of a female, Canadian, children's sci-fi author from the 80s
8
looking for early 2000's sci fi youth fiction set in future, kids have mental powers that let them simulate war
17
Short Story About an AI Learning in a Child's Body
1
70s-80s sci-fi collection with aliens and a girl werewolf who may have eaten cats
11
Book with kids with odd names and physical traits
6
Fantasy book: redhead girl talks to animals, is made to stay with her noble father, discovers she's part of a phoenix rebirth cycle
5
'90s movie about teens trapped in a haunted mansion or museum