Trilogy about a girl, dragons and Nicholas Flamel

I've been trying to track down this trilogy of books I've read when I was a teenager. The fact I've only read them translated to Lithuanian language, doesn't help.
I don't remember much, but the few details:

The first one's title had something to do with a necklace, that was given to the main character — a young girl — by her mom. It was a round thing that looked like an eye. She had a brother I think, I'm not sure though.

There were dragons that some king or emperor had as his pets, but they were more like giant komodo dragons that stank of rotten flesh and they could not fly or anything. The girl's friend or companion is a ginger man called Nick, that is led to believe is alchemist Nicholas Flamel.

The second book was about the girl meeting her father who had this magical flute, and she didn't like him because she grew up without him, but he was teaching her the magic of the flute. I'm pretty sure he dies at the end of the book.

I don't remember anything about the third book, but I'm pretty sure there was one. 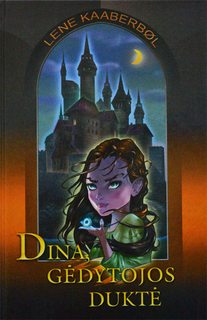 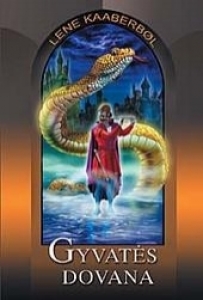 Dina has unwillingly inherited her mother's gift: the ability to elicit shamed confessions simply by looking into someone's eyes. To Dina, however, these powers are not a gift but a curse. Surrounded by fear and hostility, she longs for simple friendship.

But when her mother is called to Dunark Castle to uncover the truth about a bloody triple murder, Dina must come to terms with her power--or let her mother fall prey to the vicious and revolting dragons of Dunark.

Dina has recently come into her uncomfortable powers as a Shamer, and now even her brother, Davin, no longer dares to meet her gaze.

Yet in these dangerous times there are far worse things in store for the young Shamer, who is kidnapped and forced to use her gift as a weapon against innocent people. Dina must get free. Can her brother help her escape?

The third book, The Serpent Gift has her meeting her father. The English edition does have a musical wind instrument on the front, which might be a flute. I haven't found the Lithuanian title for it. Goodreads just has the info for the second book in its place. 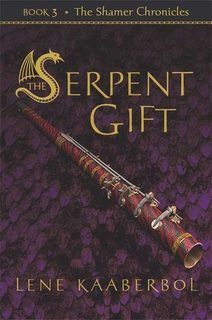 Dina has inherited the Shamer's Gift from her mother: she can shame even the most hardened wrong-doers, simply by looking into their eyes. But now she discovers a far more terrifying inheritance: her father is a Blackmaster and has the Serpent Gift for lie and illusion. And when he comes to claim his daughter, Dina and her family are catapulted into reckless flight and danger...

The Secrets of the Immortal Nicholas Flamel by Michael Scott, the first book in the series is called The Alchemyst.

8
A trilogy, the first of which was about a girl hiding a flute in a tree stump
2
Science Fiction Book or Story About Dragons
8
Trilogy of books about dragon souls inhabiting humans normally warriors
12
Fantasy trilogy with dragons
8
Animated fantasy show about a red-haired girl and two boys
8
Fantasy book opening with a character dreaming about a dragon attack, and waking up to discover actual scratches on his/her body
4
YA book series about a teenage dragon
5
Recent book about a disease that turns people into half-dragons
5
An older fantasy book about a primitive girl who lived with dragons