What's a book series, where they use precise time travel as a method of combat? [duplicate]

I've heard of one before and I think the style of time travel fighting in it was called Temporal Flux but I'm not sure. So could anyone help me?

More details would help if you have them; time has been used as a weapon in many series...

That being said, something that leaps to mind is Temporal Fugue, from Creatures of Light and Darkness by Roger Zelazny. It involves being able to move to another nearby time, adding yourself to the causality loop; i.e., you basically copy yourself. Extended temporal fugue battles can have hundreds of copies of each combatant, most of whom will be killed, but become irrelevant.

To steal from with Wikipedia page:

The Steel General, Set, and some others practice a novel martial art called temporal fugue. A fighter, seeing that his enemy is ready to attack, projects himself behind his enemy—in both space and time—to strike him from behind. Of course, the enemy does the same thing. When both warriors use the technique, recursively, things get complicated. Each character is replicated over a hundredfold, at various times in the past and future, thus putting a considerable strain on the space-time continuum.

Your description immediately reminded me of the TimeWars series by Simon Hawke. I can't remember exactly, but I believe Temporal Fugue fights were part of this series. 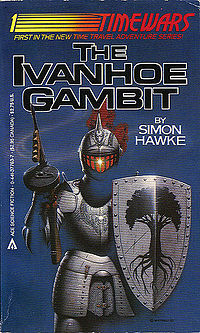 7
Can you identify this time travel book series?
6
Book about time travel to the Eruption of Vesuvius era
9
Gloomy children's book involving time travel and a grandfather clock
16
First book of a series: boy disappears from his life, becomes time travelling agent
12
Identify a book series, where order fights against chaos and they travel back in time
9
Time Travel Book featuring dinosaurs, cave people, and children
3
Time travel book
6
Book series with humans fighting bug aliens. They create an AI that decides to help them. Book includes time-travel
8
Animated movie with time travel and where people where enslaved in mines