Can the Incredible Hulk die?

In this question some users pointed out that the Hulk cannot age or ages really slow in relationship with normal people, which makes him an immortal.

But my question is this: Can he die in a battle?

The simple answer is yes, but it varies how it is possible.

In the one-shot comic "Hulk: The End" written by Peter David, Hulk is almost invincible. He survives a nuclear holocaust when no one else does. Although, Bruce Banner is not invincible. He dies and hulk realizes he cannot transform without dying also. From the synopsis:

Suffering a painful heart attack, Banner realizes how much his punishment resembles that of Prometheus, the Last Titan; condemned to stay forever alive even while animals devour him, speculating that the Hulk's suffering is Earth punishing him for humanity's sins as the embodiment of the nuclear wars that destroyed Earth. As he dies, the Hulk's persona arises in his mind. [...]

The next morning, the Hulk somberly sits outside the cave, musing in his inner monologue: "Banner is gone...got rid of him last night." As he remembers the confrontation, he realizes that if he were ever to change back to Banner, he would die also.

In the Lou Ferrigno version of Hulk, there was a TV movie called The Death of the Incredible Hulk. Hulk falls from a exploding plane and dies on the ground. Although in true comic style, "there was talk of another Incredible Hulk television movie which would resurrect the character." Unfortunately, Bill Bixby (who portrayed Bruce Banner) dies before that ever happened.

In the comics Tales to Astonish #90 & 91, the Abomination is created and kills Hulk. He is revived shortly after though. 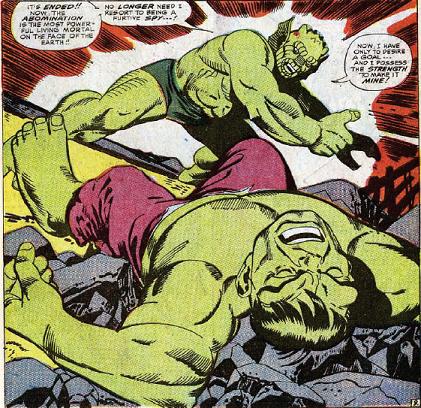 In the Old Man Logan comic series, Hulk kills and eats Logan. "Logan recuperates within Banner's stomach and bursts out, killing him." See below: 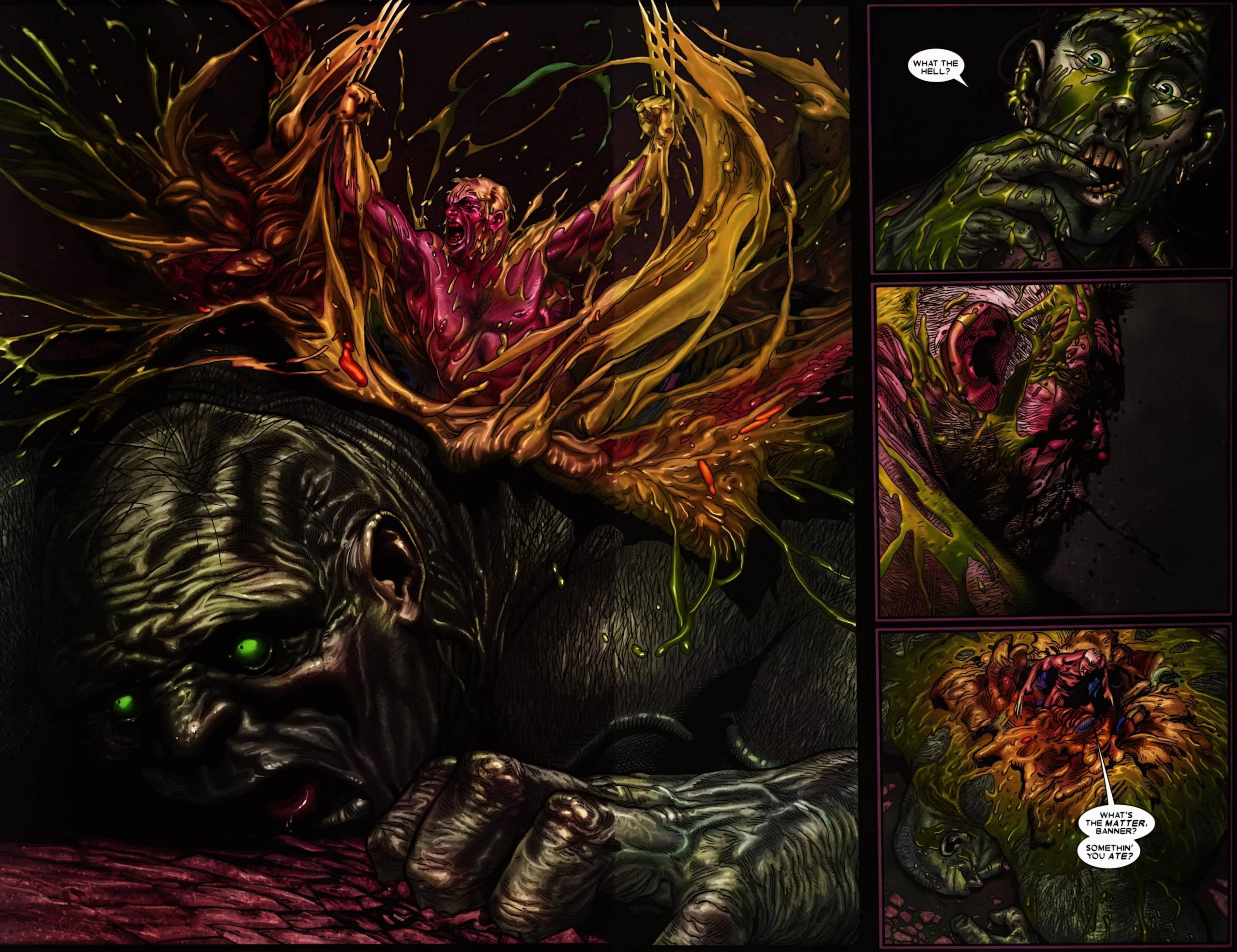 In Thor #73 (The Reigning Part 5), Thor kills the Hulk and others. Although, I believe at the end of The Reigning story arc Thor turns back time. This gallery has several pages from that issue, such as the one below. Thor also snapped Hulk's neck in a What If? issue that I couldn't find. 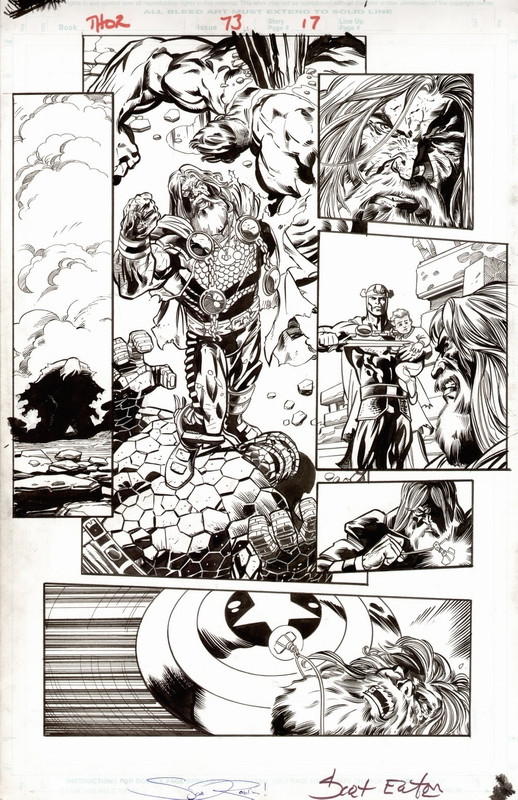 Other characters have supposedly killed the Hulk, such as Deadpool, Red Hulk (Rulk) and Galactus. But they were all in "what if?" type comics, and I couldn't find solid details online. I found evidence that Hulk killed Red Hulk (not the opposite), but this stands to reason if one hulk can die, the Hulk could die. 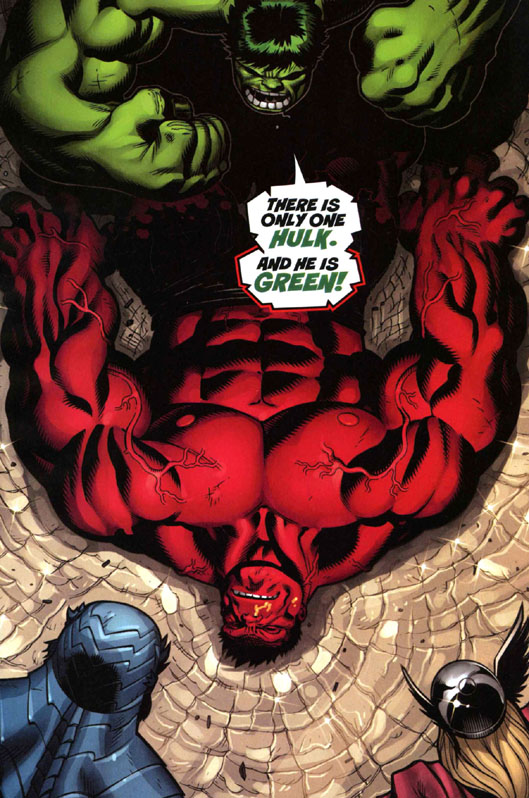 More recently, Hulk was killed by Hank Pym in What If...? Season 1, Episode 3 by entering his body with his Ant-Man suit and increasing Hulk's cells using pym particles until he exploded. 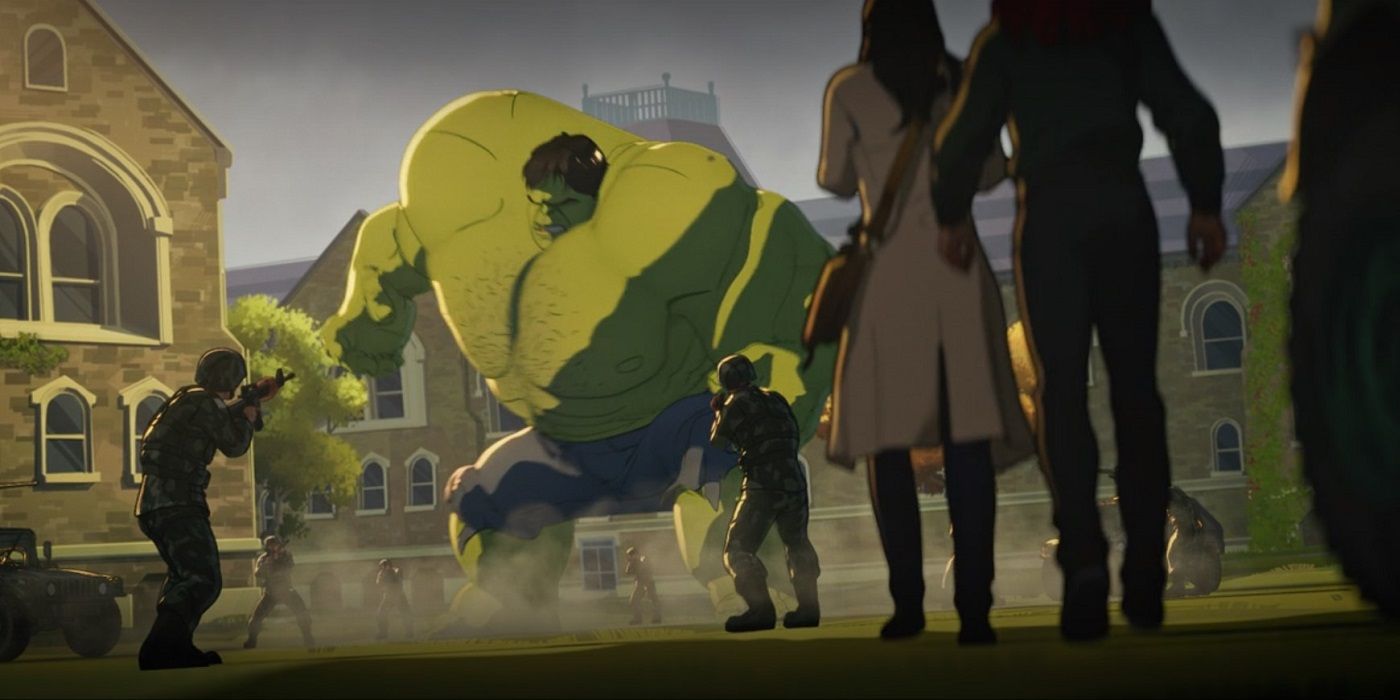 In The Avengers, Banner said that he had tried to kill himself, but it didn't work.

In case you needed to kill me, but you can't! I know! I tried!... I got low. I didn't see an end, so I put a bullet in my mouth... and the other guy spit it out! So I moved on. I focused on helping other people. I was good, until you dragged me back into this freak show and put everyone here at risk! [Bruce Banner in The Avengers]

There are many theories on how you could possibly kill him, such as ripping out his heart or decapitation, or he could be killed by another super being like in a few of the comics. Other than that, though, I have found no evidence that Bruce Banner/The Hulk can die.

He can die but he's awfully difficult to kill. Brute strength doesn't work, at least it hasn't for many, many years. Certain forms of magic can kill him. During World War Hulk someone used a wishing machine to kill hill but he was immediately brought back to life. Zeus turned off his healing factor and his ability to get stronger and nearly beat him to death. Red Hulk removed his gamma energy and reverted him to Banner. That also happed in Infinity 6 though the effects were temporary and I was under the impression Banner wasn't attacked because he would revert back to Hulk. 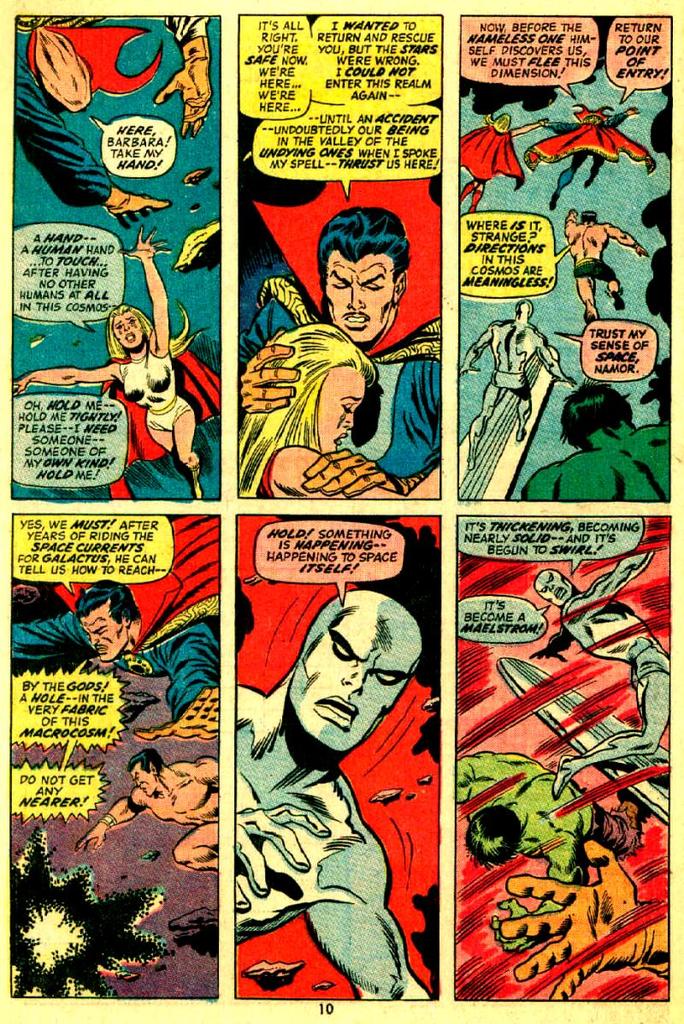 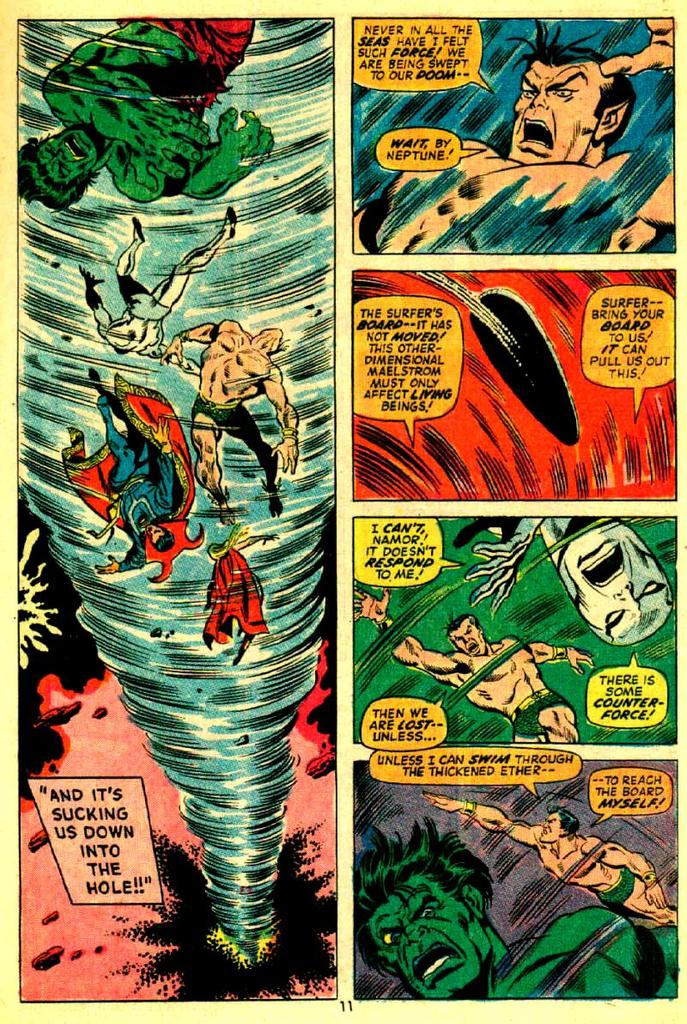 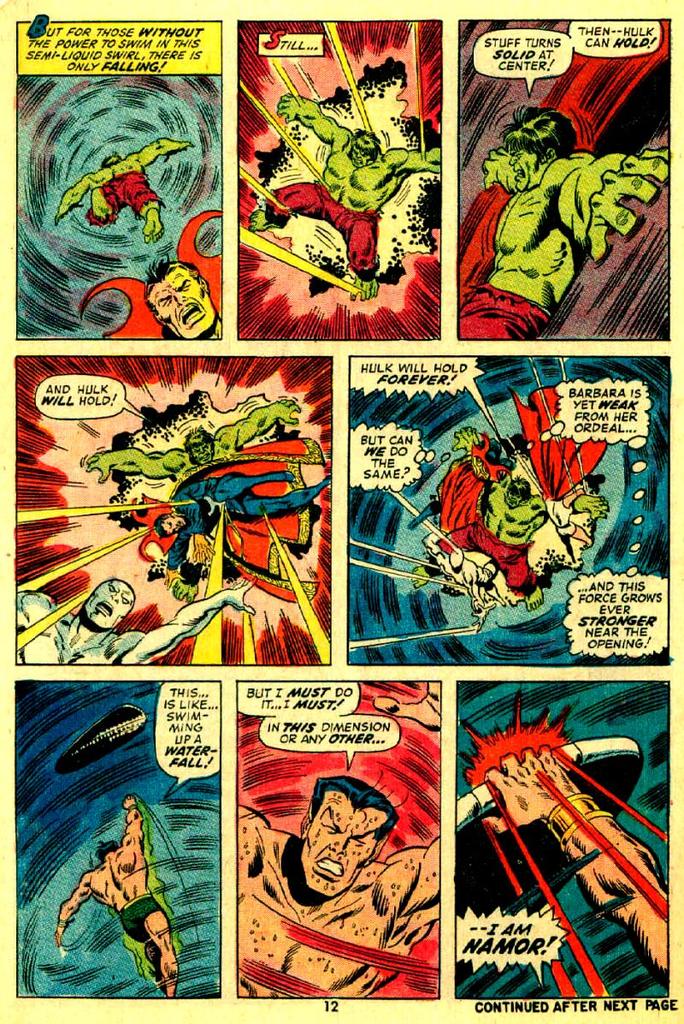 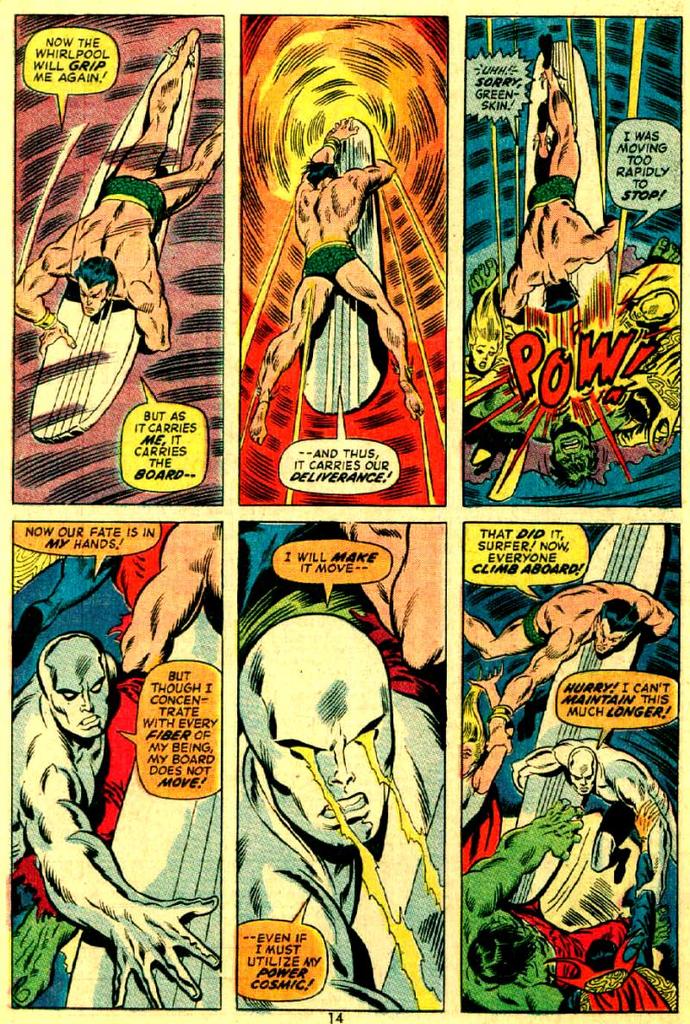 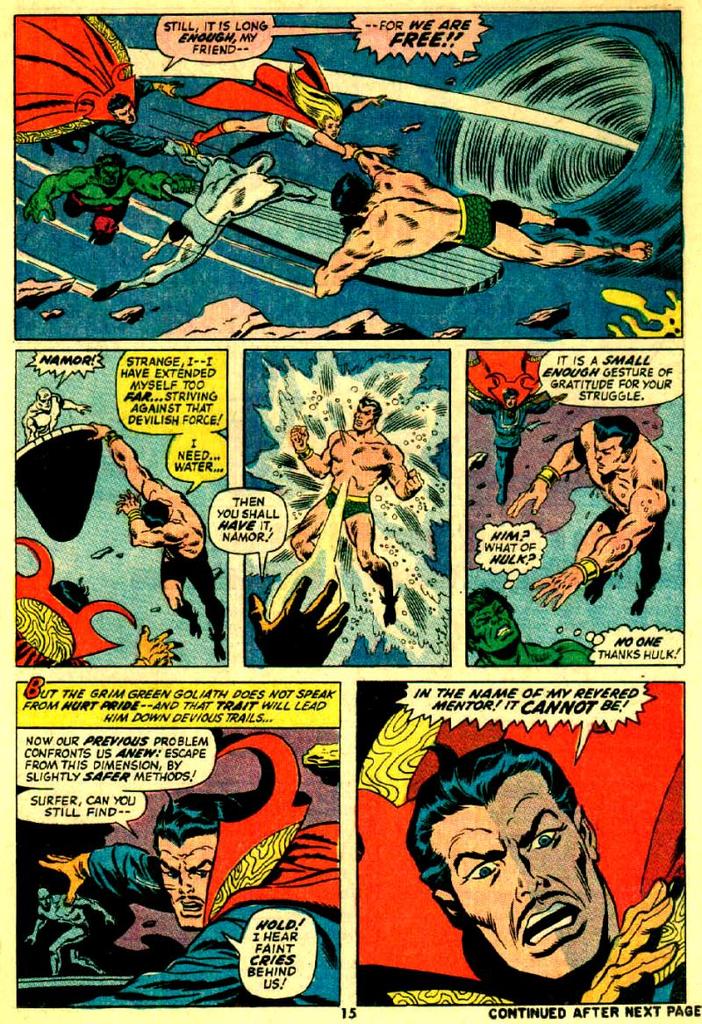 The Hulk can but can't die. In a certain comic Hulk (Bruce Banner) kills Red Hulk (or Rulk). It proves that he can die but only by someone of equal invincibility such as Hulk vs. Rulk. By Avengers' logic he is invincible because Banner shot himself in the mouth and I quote "the other guy spit it out," so unless a godly or equally invincible force is acted upon the Hulk, he is unkillable.

Yes he can, but he is almost invincible to anything. Bruce Banner doesn't want to be the Hulk and he can't change it, when he gets mad he transforms. Basically, the Hulk is almost impossible to beat and some say he's immortal but I do believe that Bruce Banner ages when he's not the Hulk so Bruce Banner is not immortal so it's kind of like a Dr. Jeykll and Mr. Hyde.

A gamma or nuclear bomb, can kill him if he is right in the place of explosion, that is how Hulk killed the Maestro, who is way more powerful than him. I think the key is in the overpowered abilities, there is a point where too much power is concentrated and a body, even hulk's can not retain it.

I have only seen the Avengers Assemble film but based on that it seems like he is pretty much unkillable. He was able to take a dozen ships concentrating fire on him specifically without seeming to be injured. He grunted with effort and frustration as he was being overwhelmed but did not seem to show any pain.

Banner was not able to kill himself buy shooting himself in the mouth, the Hulk just spat the bullet out.

However, this does not mean he is invincible. He could, for example, be thrown into space which would render him useless although alive. Perhaps he could be frozen etc? It is not clarified whether Banner could be injured (say blinded) which might render the Hulk less effective.

He can be stopped by a resourceful opponent but in terms of brute force he is a serious presence.

I have been reading into this all night after reading the World War Hulk series and wondering if he could die. It was said by one of the super beings that Hulk, even if disintegrated, would reform due to the intense healing. So beheading is out.

The best solution to the Hulk would be someone with the Phoenix powers, preferably Rachel Summers who commanded the power at it's strongest, to simply disintegrate him, absorb his life force and then cast the particles to every end of the universe. That would be the end of Hulk for a very very long time.

Thanos beat him in the infinaty gauntlet but thanos had the infinaty gems and was deemed a god, hence him beating most of the marvel universe up at the same time.

Will edit to add the page, but in Punisher kill the Marvel universe, the Punisher does kill Hulk, with a arrow in the eye.

However, it does not count as it is a "What if" where almost all this alternate universe is affected by a zombie virus.

Listen guys It really is just impossible to kill the Hulk. No matter what happens whether he gets hit by a gamma bomb or cast to all the ends of the universe one way or another he will still return as the Incredible Hulk.

LOL. I know how the Hulk can die, from my opinion hulk can die easily when he was in human form. Trust me, you will think that what Bruce Banner said in Avenger is true ( that he can't die):

"I put a bullet in my mouth, and the other guy spit it out"

From what I can think of, Bruce Banner still can die, but in a crazy way. What if Bruce Banner in human form exploded his head with a grenade or even with c4? Or he chopped his head off with a katana? I'm pretty sure that these incidences would end with the Hulk's death.

zzupermanzzuperman
9
2
Add a comment  |
Highly active question. Earn 10 reputation (not counting the association bonus) in order to answer this question. The reputation requirement helps protect this question from spam and non-answer activity.

-2
Can the hulk die?
118
Is Thor the only Avenger who can't die?
28
Has Wolverine ever beaten The Hulk in a fight?
15
Could HYDRA have killed Bruce Banner?
1
When did the Hulk fall into a black hole?

8
Can Bruce Banner Have Sex Without Becoming the Hulk?
22
Can a cage made out of Vibranium contain The Hulk?
17
How could Hulk be knocked out?
22
Why is the Hulk so angry?
15
Is there any significance to Stan Lee's cameo in the Incredible Hulk?
1
Other than a "Lullaby" how does Hulk turn back into Bruce Banner?
46
How did Thanos beat Hulk so easily?