About 25 years ago saw a made for TV episode with Joseph Campenella in a near future society with a Soylent Green ambiance. He and his wife did not get their food stamps and go through a government bureaucracy with no resolution. The last scence shows him at the government office walking away with his stamps and missing an arm. What was the name of the series and episode?

After following a comment thread on imdb from the TV show Insight about an "arm roasting episode" I came across this article about preaching to the unchurched.

It gives the plot of the movie exactly as you describe it in your question.

Growing up Methodist in Ft. Worth, Texas, in the 1970s, our favorite activity was to order 16mm films from a catalog that catered exclusively to church groups. There was the lugubriously surreal proto-Claymation of the Lutherans’ Davey and Goliath, the weirdly prenatal cartoon specter Jot from the Southern Baptist Radio–TV Commission—even Saul and Elaine [End Page 217] Bass’s secular 1969 Oscar-winning short Why Man Creates. But our favorite was a vaguely Twilight Zone–like parable where a bureaucratic snafu prevents Joseph Campanella from receiving his family’s monthly allotment of food vouchers from the state. Thwarted at every turn by endless red tape (including some from a supercilious prosecutor played by Adam West), Campanella is seen in the final shot grimly receiving his next month’s vouchers, only to reveal the arm of his suit jacket now hanging limp, presumably the source of his family’s intervening sustenance. The elegance of such a payoff was like catnip to the twelve-year-old imagination.

In the 1970s Joseph Campenella starred in several episodes of "Rod Serling's Night Gallery", a Type #5 spin-off of "The Twilight Zone". 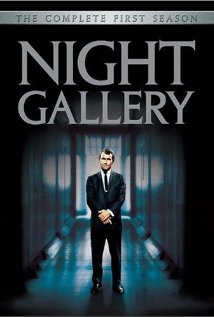 There were several episodes in which he starred that featured a theme of amputation, but none of them had the amputations performed by the government;

In "Marmalade Wine: A Very Special Nightcap", an insane doctor amputates a horse-racing pundit's legs so that he can keep him captive (ahem, Misery anyone?)

In "The Hand of Borgus Weems", a man visits a doctor because he believes his hand is being controlled by an evil spirit. The episode ends with the man's hand being removed.

8
Sci-fi type of show where a guy traveled in search of his wife and helped solve paranormal cases along the way
21
Name that film 70s/80s futuristic office working
16
Looking for a book about a genetically engineered person
5
The Walker? Set In the future
16
Movie with talking zombies, one zombie eats his own arm
7
Slow starship passed by FTL starship. Upon arrival finds society has evolved past them
23
Sci fi book, maybe 1960's, futuristic city patrolled by robots, no medication
12
Looking for an older "Asian Twilight Zone" show from the late 80's to early 2000's