Was the Vision more powerful than Ultron?

We know Ultron created the android "Vision", and then imprinted Wonder Man's memory engrams on it, but eventually the Vision turns on Ultron and actually becomes an Avenger.

Has Vision ever shown himself to be stronger/more powerful than Ultron within the same canon universe? 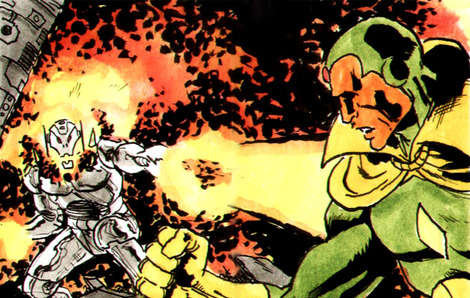 No. The Vision, while eventually turning on his master Ultron-5, he was in no way a match for the malevolent machine if he fought alone. Ultron is possibly one of the most powerful foes the Avengers have ever faced. 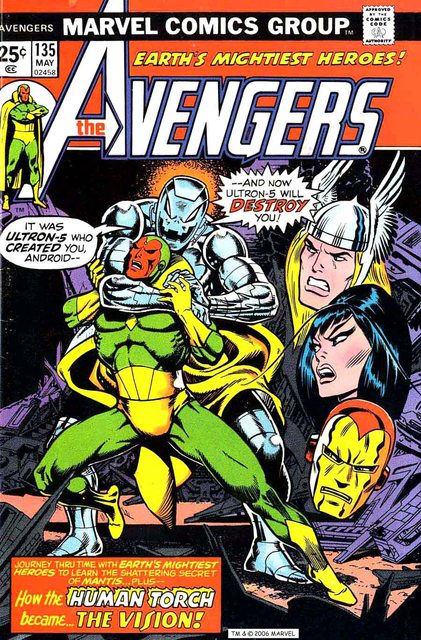 The Vision has a number of superhuman capabilities which make him a formidable foe:

Unfortunately, NONE of these powers is enough to stop Ultron-5 whose durability was that of adamantium, and had no serious physical weaknesses at all. 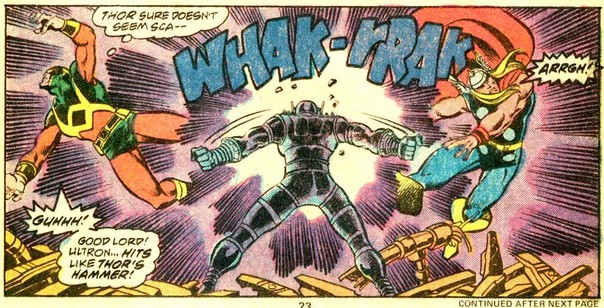 Ultron brings the pain with the force of Thor's hammer to Wonder Man and Thor simultaneously. 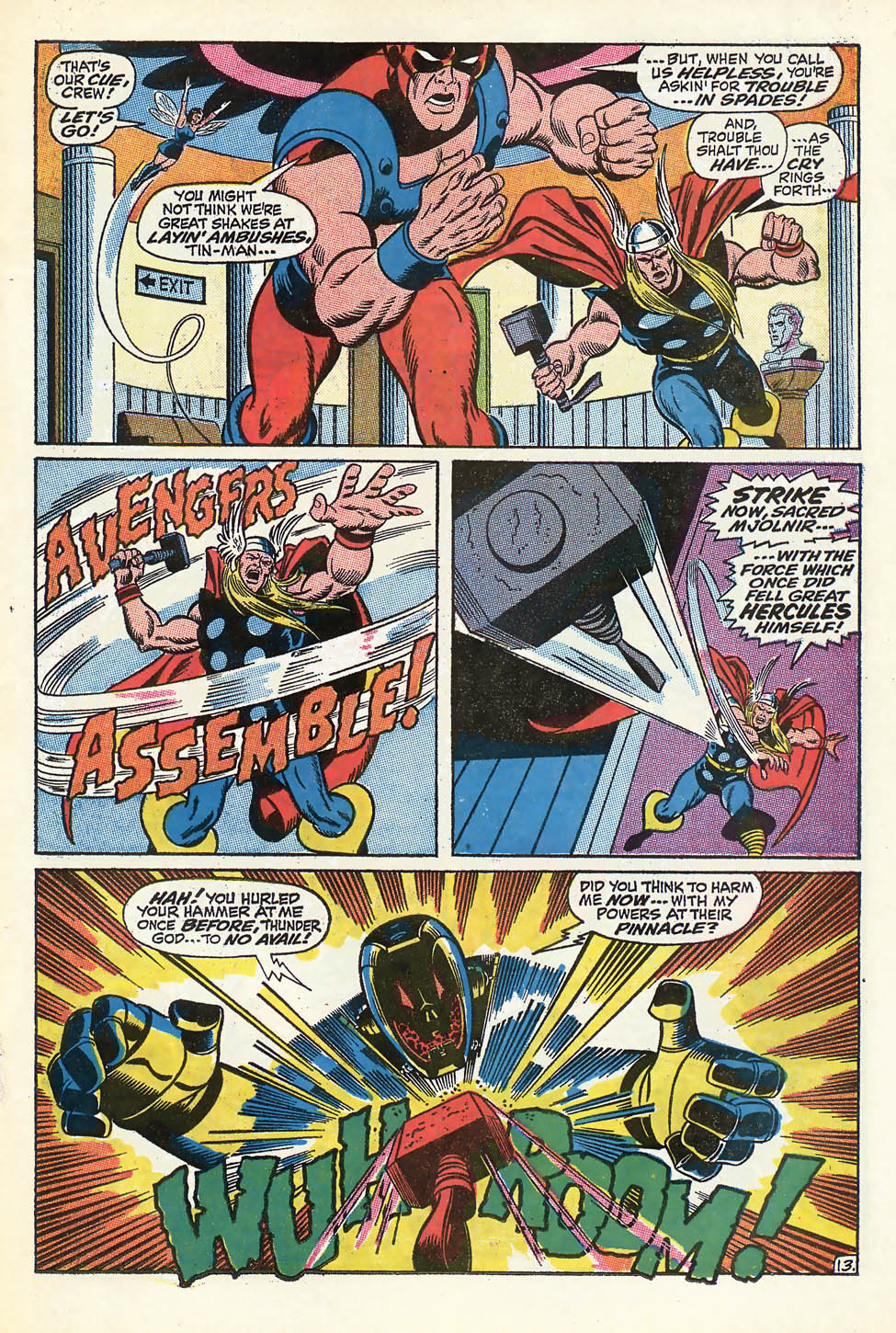 True adamantium Ultron used to give the Avengers hell on a semi-regular basic. He would take on the entire team, Thor included, and only end up being defeated because of things like Wanda's hex affecting his molecular rearranger, or being trapped in adamantium. It was said that he didn't fear Thor, and Thor's lighting strikes and hammer blows had no real effect on him.

It would take the entire Avengers to defeat him once his body was upgraded to pure Adamantium. Unfortunately, the same hubris that leads Ultron to fight the Avengers is almost always his undoing in nearly every confrontation with them. 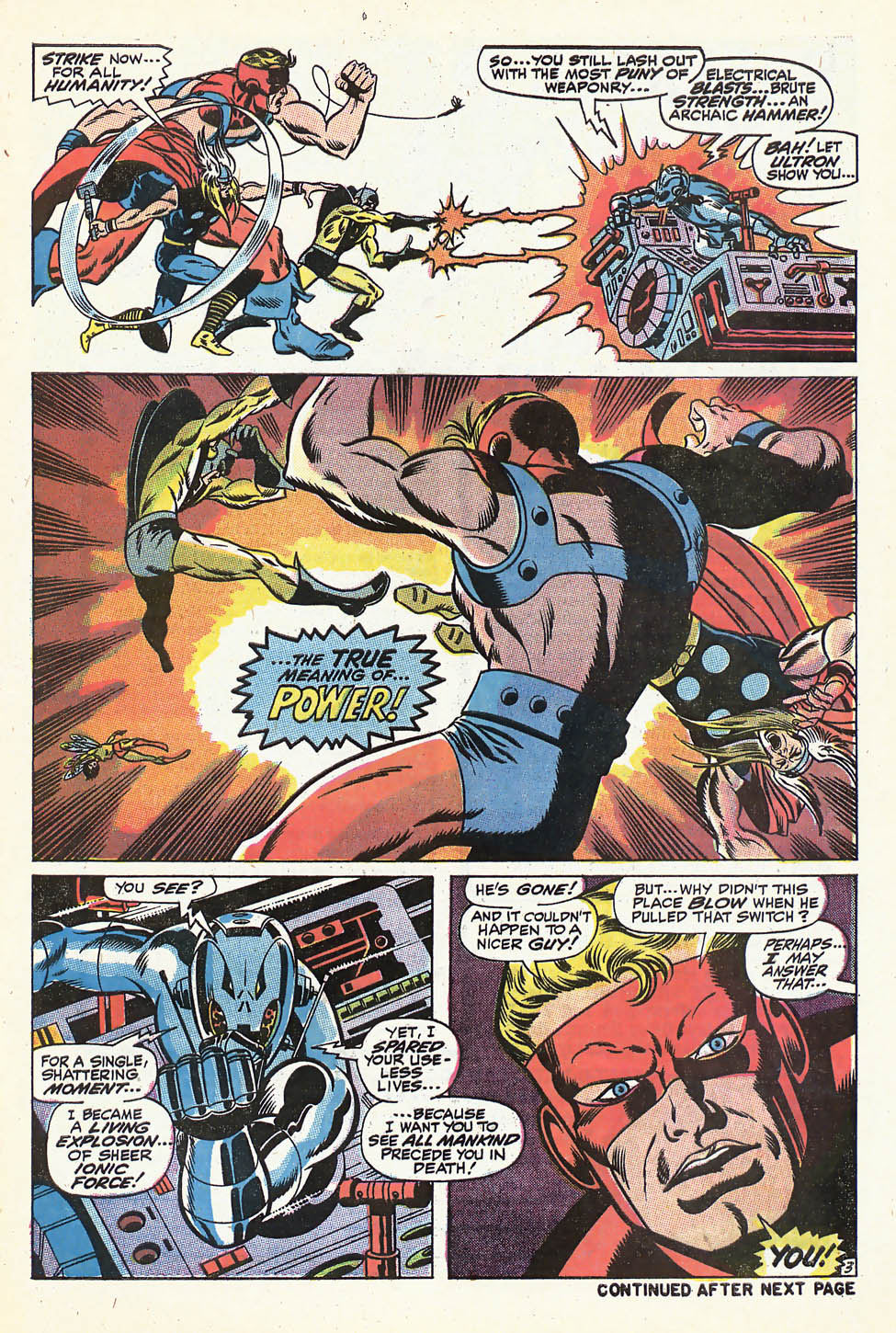 Assuming you're referring to Ultron-5 then the answer is an emphatic yes. Ultron may spend much of the time rebuilding himself, including upgrades at each turn (for example trying to upgrade his body to Adamantium, building an army of robots, etc) yet he is constantly thwarted by the Avengers on an almost clockwork basis.

Ultron-5 was able to control Vision through the use of a chip in his brain. Once that chip was negated, Vision was able to function freely as an individual and is certainly a match for Ultron given his extensive range of superpowers and Ultron's bizarre inability to stop himself from self-destructing (facepalm).

As baddies go, Ultron is the diet coke of evil and pretty much a punching bag for whichever superhero is having a momentary crisis of faith that week.

5
What exactly was the relationship between The Vision and Wonder Man?
10
In Age of Ultron what exactly did Thor do to Vision?
18
Why did Ultron and The Vision disagree in Age of Ultron?
12
Is there an objective answer to who "the strongest Avenger" is?
11
Is Scarlet Witch more powerful than Doctor Strange?
12
What's the Wakandan word for Vibranium?
11
Is Thanos more powerful in Endgame than he was in Infinity War?
4
Did Tony base J.A.R.V.I.S. off of the real Avengers butler?