What happened to Optimus Prime's trailer when he transformed into a robot?

When (the original, G1) Optimus Prime transformed into robot mode, this trailer just seemed to disappear. When he went back into truck mode, there was his trailer again!

I'm guessing this was to help the animation and story telling. But what was the in-universe explanation? Where did it go?

This question is applicable to both the comic and the cartoon continuities.

There is no in universe explanation form the cartoon continuities. For the comics, it look like there is one.

Form the Transformers Wiki, Note section of the Trailer article

When Optimus Prime transforms into robot mode, his trailer usually disappears, only to reattach itself to Prime whenever he goes into vehicle mode. Many fan theories about this disappearance have arisen over the years, with the most popular being that Prime stores the trailer in subspace. IDW comics gives a nod to this, by having the trailer arrive at Prime's location using the orbital jump.

The General consensus is that it just goes over there, i.e. just out of camera shot. Funnily this is subverted in the original Marvel Comics four issue run, where Prime's trailer just sits there clearly visible not doing anything while the action takes place around it.

The second bullet point on this tfwiki page says:

During the entire battle at the Witwicky's house, Optimus Prime's trailer sits parked, frequently in view. This is in stark contrast to the more fantastical cartoon, where it would just roll off-screen and vanish.

There is now an official answer, the:

Greg Sepelak and Trent Troop used this phrase in two of their stories for the official Transformers Collectors' Club comic. Hence this phrase is now canon.

Source; this rather awesome video1:

Another theory produced by a Transformers fan is that the trailer is created each time by the creation matrix.

To quote from the end of the video:

I think the matrix gives Optimus Prime and Rodimus Prime the ability to manifest a trailer whenever they transform into a truck.

Personally I'm not convinced that the creation matrix has the ability to manifest real world objects; I think its purpose is to impart life to Transformers. But I like the theory and the fact that the fan has, rightly, also taken Rodimus Prime into account.

Optimus Prime has people to take care of these things

Here we see his loyal subordinate Huffer towing his trailer: 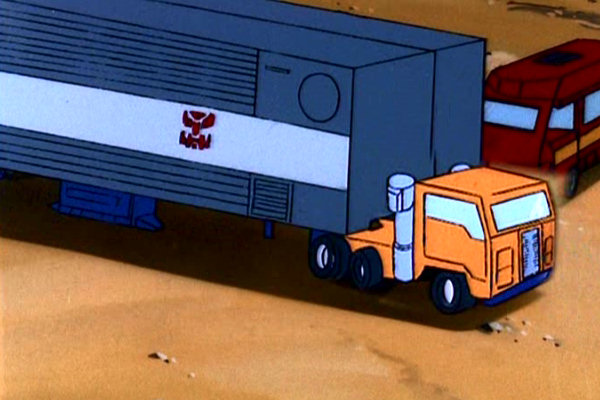 Theory 1: inside every transformer is the ability to shrink--but not enlarge--themselves and any of their components in robot or disguise mode (This would also explain why Sky Fire and Astro Train can fit groups of transformers who shouldn't fit inside them--and why Megatron and Sound Wave transform into things much smaller than their robot modes.).

Theory 2: Optimus stores his trailer in another dimension and can bring it to this dimension at will--either because any transformer can or because the matrix allows him.

Theory 3: like the Allspark in the first Michael Bay film, Transformers can fold themselves and different components over into very small objects; in Optimus's case, he would store the condensed trailer in his body.

Theory 4: like Mirage, Optimus's trailer can turn invisible and follows Optimus around everywhere while he's in robot mode.

16
How do Soundwave, Megatron, etc. change size and mass?

14
If Optimus and Megatron came to Earth 4 million years ago, why are the Transformers' robots forms so humanoid?
15
Why can only Decepticons fly in robot mode?
12
Why does only Hot Rod get magically reformatted by the Matrix of Leadership?
5
How does ‘Transformers: Rescue Bots’ fit into the Aligned Continuity?
11
Where did the Transformers ammunition come from?
6
What is Lockdown doing in Transformers 4?
6
In Transformers (2007), how did Megatron transform into a fighter jet?
4
Does transforming heal Transformers?
13
Is Optimus Prime as we know him one of the Thirteen Original Primes?
3
Toy identification: Transformer knockoff - Big Blue Head