How did Vaatu break through the barrier that separated the Plane of Spirits from the Material World?

In the second season of The Legend of Korra animated series, Vaatu says to Avatar Wan during Harmonic Convergence that:

Was Vaatu the one who created the Southern and Northern Portals? If one cannot return after being defeated during Harmonic Convergences, then both of them must have lost at some time before the humans came into existence.

Since you are asking two unrelated questions, I will split my answer into two parts:

Did Vaatu create the Southern and Northern portals?

We don't know: Both portals are treated as something existing from immemorial times, from before the Avatar Era.

Since Vaatu claims to have been the first one to transit between the two worlds, we could consider logical that he created them, but in this case, why create two, when only one was necessary? The portals may be natural weak-points Vaatu only discovered (note he does not boast about creating the portals themselves), or Raava could just as well have created them to introduce more spirits into the physical world, since she considered them less chaotic than humans.

Why did not Raava or Vaatu lose long before humans come into existence?

Raava or Vaatu can never be destroyed for good, be it during an Harmonic Convergence or not, as explained by Raava in Beginnings, Part two:

He cannot destroy light any more than I can destroy darkness. One cannot exist without the other. Even if I defeat Vaatu in this encounter, darkness will grow inside me until he emerges again. The same will hold true if Vaatu defeats me.

However, Vaatu can be freed during Harmonic Convergence, thanks to the energies liberated from the two portals breaking his jail: 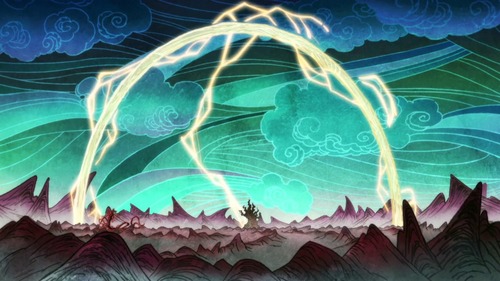 That's why Harmonic Convergence is important, not because if would permit any of them to destroy the other definitely, since the victim will always reform by the next one

6
What evidence is there that Amon really used bloodbending to take away bending of the other characters?
6
How did Azula know that the Dai Li were still loyal to Long Feng even after he was imprisoned?
7
What happened to Vaatu?
1
What happens to Raava after fusion with Avatar?
11
How did Toph know that Korra was the Avatar?
11
How did Iroh manage to escape from the prison during the Day of Black Sun?
6
Who is Fire Lord Izumi's mother?