I have some chickens named with Borg designations. There were originally 4, so each of them was N of 4. Two of them died though, then I got two new ones, so should the new ones get their own group designation ("of 2") or should they become part of the original "of 4"? I would like to be technically correct about this.

SEVEN OF NINE: Six of Ten... that's not your assignment.

KIM: Please stop calling me that.

SEVEN OF NINE: You're compromising our productivity.

SEVEN OF NINE: I'm reassigning you to chamber maintenance. Your new designation is Two of Ten.

KIM: Wait a minute. You're demoting me? Since when do the Borg pull rank?

SEVEN OF NINE: A Starfleet protocol I adapted. It's most useful.

KIM: I'm glad you're not the Captain.

Her convention is to use the number to designate rank within the team. Since the borg don't hold ranks or possess individuality, it therefore follows that you should simply give your new chickens the first available number within the team and to renumber the team accordingly

Don't worry if you've duplicated a designation with a now-defunct chicken as they're essentially interchangeable. 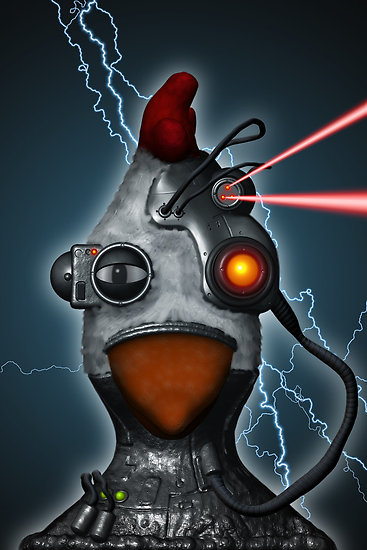 Image courtesy of faykokoWV from BYC.

The flashback(s) in VOY 6x02, Survival Instinct, suggest they will not resize the group unless necessary to accommodate new drones.

Just under 15 minutes into the episode, in one of the flashbacks, Seven explicitly calls one of the drones "Three of Nine" despite there only being 4 survivors. A few minutes later, after that flashback, the modern Seven identifies them each as "Two of Nine", "Three of Nine", and "Four of Nine" - they and her all being members of the same unimatrix.

Even later in the episode, in another flashback when Seven linked the three together and created the sub-collective, they still identified themselves as Two, Three, and Four "of Nine", despite the sub-collective only containing 3 drones.

The circumstances on the planet are a bit special, in that they were regaining their individuality due to losing the Collective, however the loss of the other 3 drones happened well before their personalities started to emerge. If they were going to renumber into an "of Four" unimatrix, they would have done so before that happened, or after Seven created the sub-collective. They did not.

The new chickens must be named Locutus and Hugh. You can assign these based on perceived personality, letting Hugh be whichever chicken you believe most likely to betray them all and fall for Lore's tricks.

1
Do Borg Drones dream while regenerating?

31
Were there REALLY over 73,000 Federation starships commissioned?
8
How could Data kill that Borg in Descent P1?
13
Is Sisko referring to the events of First Contact here and if so how does it affect things?
13
Why can Picard still hear the Borg?
8
Was Picard guilty of murder in First Contact?
16
Where were the advanced species and civilizations of ST:TOS during the war against the Borg?
18
“He's dead, Jim”: Which Star Trek characters have returned from the dead?
6
Is there an equivalent to The Federation in the Delta quadrant?