What is the recommended order to read Honorverse works?

Some of those works were published later but are in-universe prequels (e.g. "More Than Honor" anthology and "The Star Kingdom" contain a backstory of how humans and Treecats met). Some are sequels with different characters in the same universe ("Crown of Slaves" series)

Is there a recommended order of reading all of them? (ideally, informed by Weber's opinion).

An important point I'm interested in is the order of reading of short stories (published separately or in anthologies) - e.g. do they apply to different books/series and if so, should they be read together in the anthology, or within appropriate series order?

Having read pretty much everything in the Honorverse, it is my opinion that the best reading order is chronological, by in-universe time. The vast collection of stories and novels make up a single, massive, inter-related narrative and it all just makes more sense when read chronologically.

The Honorverse page on Wikipedia contains a complete, up-to-date, listing of all the novels, as well as short stores, in the section Stories listed by internal chronology. This shows dates, and sometimes helpful notes, so that readers can see how the stories overlap.

The best order, IMO, is to read the original Honor series until after Honor Among Enemies.

After that, you should have enough background info on the Honorverse to either follow strict chronological order (A Whiff of Grapeshot from More Than Honor would then be next), or to read all the Pre-Basilisk stories as you see fit until you get to AWoG.

Just forewarning to those new to the Honorverse.. the series starts to become intermingled after Honor Among Enemies, and if you chose not to read the stories from the anthologies, or the Crown of Slaves and Saganami Island series you will be missing quite a bit of relevant info.

According to David Weber's official fan website, the books were originally intended to be read by publication date.

As the series has progressed in terms of both complexity and size, various changes have been made and the accepted order is now shown below, primarily (but not exclusively) focusing on in-universe chronology.

"What order Am I supposed to read the Honor Harrington/Honorverse books?

Great Question! David originally intended the books to be read in order by publication date, but that's gotten a little complicated.

Check out our handy list, contributed by Christine Acker!" 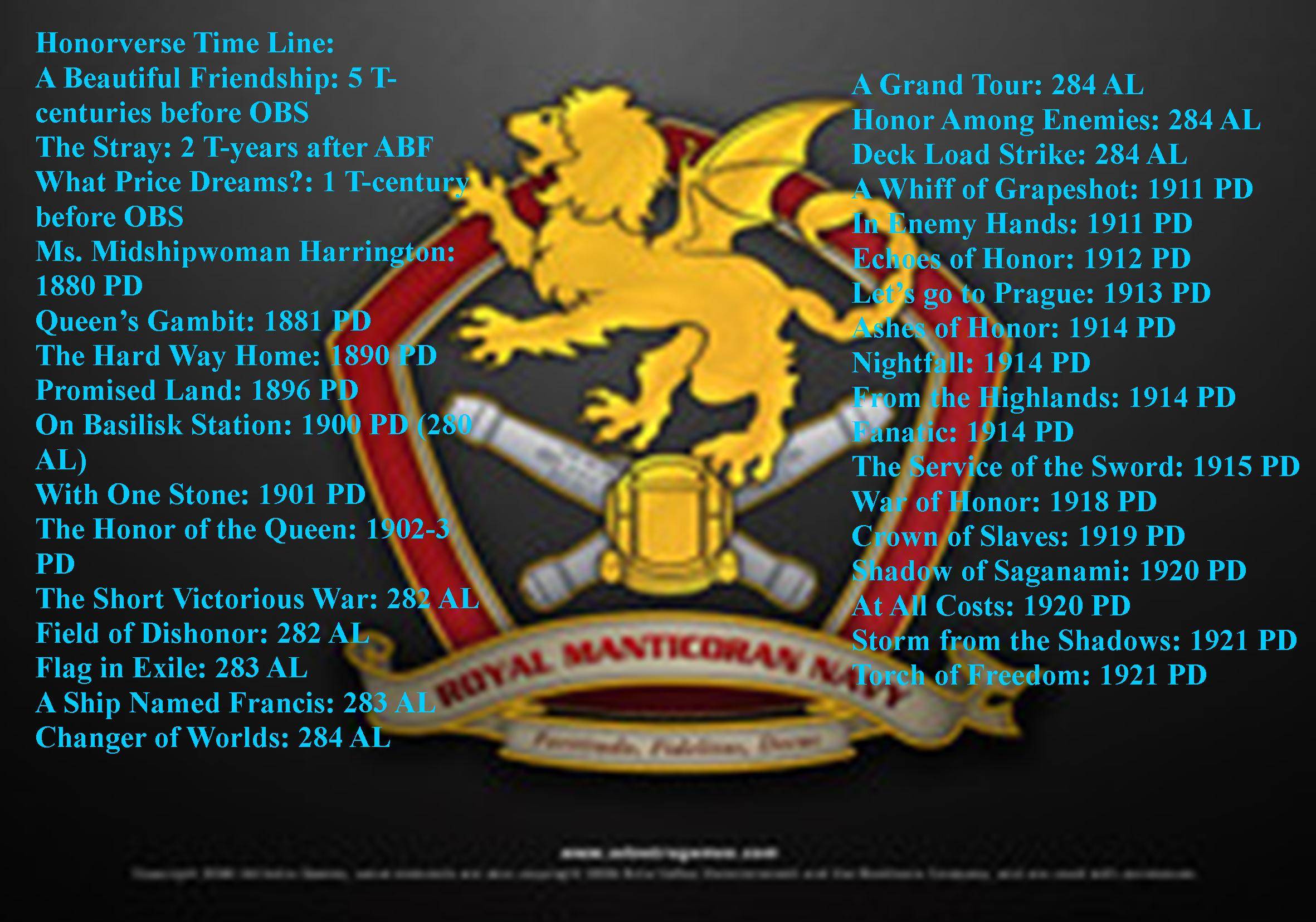 EDIT: In hindsight, I don't think this was good advice. Read them in publication order, otherwise the later main-series books lack a lot of important context.

Strangely enough, I mused about this a few days ago - I read the entire lot since Christmas in a rather strange order, so I was wondering how I should have done it.

My recommendation would be to read the main series in publication order followed by the anthologies likewise, then the two spin-off series together in (in-verse) chronological order. Logic:

That's all I have to say for now!

First off, it's worth pointing out that David Weber is the Word of God on all of this, so take my opinion with a grain of salt.

The series started out as a novel series written by Weber beginning in 1992 with On Basilisk Station and continued with Weber as the sole creator up until roughly 2000 when Ashes of Victory was published. Two anthologies were also published - More than Honor and Worlds of Honor - in 1998 and 1999, respectively, with Weber writing stories and editing both anthologies, but none of the stories in those anthologies really add very much to the main story line.

However, between the publication of Ashes of Victory (or really, Echoes of Honor, the previous novel) and War of Honor, Weber kind of let the Honorverse get out of control. Just about everybody in the Baen bullpen took a crack at throwing new characters into the Honorverse and, while not all of them stuck, enough did that you have to pick up at least a couple of stories from the various anthologies to keep up with the overarching narrative.

The most important characters for the narrative, at least, right off the bat, are going to be the Zilwickis, Victor Cachat, and Abigail Hearns. They are featured in a couple of the short stories - "From the Highlands" in Changer of Worlds for the Zilwickis and Cachat, and "The Service of the Sword" in the anthology of the same name for Abigail Hearns.

After picking up those characters, you're ready for War of Honor. The Honorverse isn't done fragmenting, however. Two more spinoff series start pretty quickly after War of Honor: the Crown of Slaves books and the Saganami Island series. Luckily, since Weber (sometimes with Eric Flint) is writing all of them, you're pretty safe sticking with publication order - as long as you picked up those new supporting characters from the short stories.

A call to Arms and beginnings and Fire season are part of two different new series but they won parallel and time roughly for part of it the cart arms and Fire season series which is about Stephanie Harrington and the finding of the tree cats Stephanie Harrington Park takes place slightly after the beginning of a a call to Arms about Travis long Stephanie is just a child at this time where Travis long is a teenager and it develops where call of dut in that series which is called Manticore ascendant is the developer of the Manticore is ascendant series. A call to duty is book one of it and series. Stephanie Harrington series first book was a beautiful friendship , then Fire season and then tree cat Wars both a call to duty and a beautiful friendship, both started as short stories in the book beginnings.

Not the answer you're looking for? Browse other questions tagged suggested-order honorverse david-weber or ask your own question.