What are the "evil spirit" animations supposed to be?

After Connor MacLeod beheads the Kurgan, he goes through some kind of event, as had other Immortals after winning battles, but this time it is accompanied by various animations of what appear to be "evil spirits" attacking him.

OK, found something that indicates where the dragon image MAY have come from. Wikipedia (without citation) states the following in "Alternate releases":

Proposed duel in the ending

In the scene following Connor beheading the Kurgan, Mulcahy had originally envisioned an animated dragon with the Kurgan's battle helmet emerging from his decapitated body and challenging Connor again. Only after Connor had defeated this ghost-dragon would he have received the final Quickening and subsequent Prize. This idea was eventually cut due to budget constraints.

If you check the images, they DID have the energy look at times like some sort of monster/animal spirit. Mostly looking like Chinese Dragons (the screenshot I found isn't good for that but I re-watched the scene and it shows the long dragon body before that). 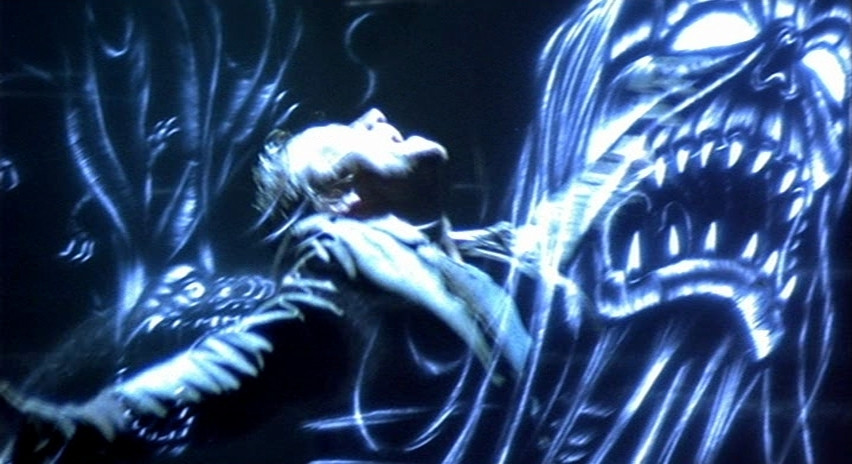 There's really no good canon explanation of details of it in the first movie itself. There's no "evil spirits" or "evil essence". Just energy/spirit/whatever.

Note that most of the Quickening it was just pure energy:

As the canon stands (alternate release info above nonwithstanding) there's no information leading one to believe that the dragon image had any deep meaning aside from "this is the special Quickening that gave MacLeod the Prize".

Now, I looked at the script:

The only "good/evil" thing that is known was NOT in the movie, but in the series (and didn't involve spirits either). To quote Wiki:

On rare occasions, the Quickening overwhelms the personality of the Immortal, even turning a good Immortal evil. This occurrence is known as a Dark Quickening in the series version (reference: Episode "The Sea Witch," Bonus Material, William Panzer's interview, in Highlander: The Series (season 1) (DVD, Davis-Panzer Productions, Inc., 2001), disk 3.)

(there was apparently a reverse process as well, e.g. Sean Burns Quickening got Dunkin to become "less evil" after a Dark Quickening).

9
What is the "Immortal Radar" range?
11
Can two Immortals gang up on one? If so, what happens with the Quickening?
7
Are all the people on planet Zeist immortal/Immortal?
6
Is the Kurgan referring to Jesus?
4
What were the details of the claim that "Highlander: The Source" events were just a dream?
3
What are the other unwritten rules?
3
What did The Witches Cave (Podzemelye Vedm) movie rip off from Highlander?
14
Why didn't the immortals sense the presence of the Kurgan nearby?
6
What happens to the bodies of immortals after they have been beheaded?