Is there a “final” FINAL screenplay for Highlander?

If you look at Gregory Widen, Peter Bellwood & Larry Ferguson's Highlander screenplay as of 2/6/1985, most of it is nearly 100% identical to the movie (the plot and even the lines).

Everywhere I saw, it was billed as "final".

However, it differs from both US release of the movie, and even the European-release-based Director's cut, in significant ways. Two examples are:

Is there a screenplay version (NOT the novelization) that's "more final" and matches the actual movie?

The screenplay for Highlander received extensive re-writes between the early drafts by Gregory Widen in June 1981 and the initial shooting script completed in Feb 6th 1985 by Gregory Widen, Peter Bellwood & Larry Ferguson, this being the latest version available on the internet.

There does seem to exist a "final shooting script" that was revised up to June 21, 1985 (e.g. beyond the start of principal filming) but you'll need to pay cashy-money to get hold of it. This booklet was apparently available through the official Highlander mail order catalog. 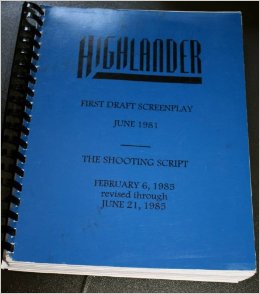 11
Was anyone else considered to play The Highlander?
6
Musical themes carried over from the Highlander film to TV series
13
What exactly constitutes a Holy Ground in Highlander canon?
5
In any of the Highlander movies (except #2), is there a clear implication that Only One remains?
17
How many Immortals are there in Highlander Universe?
15
In Highlander universe, why don't Immortals just hide?
16
Who was the longest lived Highlander Immortal?
4
What were the details of the claim that “Highlander: The Source” events were just a dream?
23
Why do immortals not use any neck armour in Highlander (1986)?
7
Is Alex the same person as Sarah in Highlander 3?