In Star Trek reboot, is Khan from the 20th century?

In TOS, Khan is from the 20th century, rules a significant area of Earth for a while, and then leaves Earth at the end of that century. Is that still the case in Star Trek Into Darkness? If so, is the reboot occurring in an alternative timeline from our own (since we obviously have not yet seen a Khan dynasty)?

I think it was a blunder on the part of the writers or something because it was stated that they were frozen for over 300 years... That would mean that Khan and his crew were from the year 1959... In the original series he ruled much of Earth in the 1990s, so it's impossible for Khan to be the same as the original one.

As shown in the wikipedia for Khan it states this...

In Star Trek Into Darkness, set in the alternate continuity established in Star Trek (2009), Khan is awakened almost a decade before the events of "Space Seed". Khan is given the false identity "John Harrison" and coerced by Admiral Marcus into building weapons for Starfleet in exchange for the lives of Khan's crew. He ultimately rebels and comes into conflict with the crew of the Enterprise.

If we are led to believe that new movies are just set in a divergent timeline then Khan's origins would have stayed the same. It's more reasonable to believe that this new Star Trek is an alternate universe / alternate continuity as whole not just starting from the point where Kirk's father was killed.

The movie never said that they were in stasis for 300 years. It just said that Khan was 300 years old. This is consistent with the original backstory. As said above, events prior to 2233 would be unchanged by the divergence of the timeline. The inconsistency between Khan's backstory and real life DOES indicate that Star Trek doesn't take place in our future. But we know from the writers that the Abrams universe was NOT already an alternate timeline ( in the sense of being alternate to the Prime ) before the Narada showed up in 2233. This is fully reasonable and consistent with what we see on screen. Abrams also clearly watched Space Seed since he preserved the exact number of Khan's crew that survived as seen in the episode.

Yes, the reboot is in another timeline from ours.

In the comic that @BCdotWEB references Khan is shown to be a teenager in 1972. He is kidnapped by some shadowy organisation from the streets of New Delhi and taken to a secret facility for genetic experimentation. In 1985 Khan and the other genetically enhanced children escape, killing their captors/jailors. On 17 September 1992 they do this. 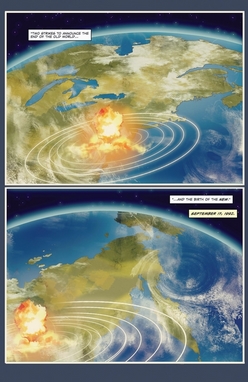 This hasn't happened in our timeline so the ST reboot is not in our timeline. So the wormhole that transported Nero and Old Spock did not only displace them in time but also to another timeline.

There is an official comic for the origins of Khan which detail his past:

Witness the shocking origin of Khan Noonien Singh from his earliest years through his rise to power during the epic Eugenics Wars! Behold the events that led to his escape from Earth aboard the Botany Bay! Learn the truth behind his re-awakening by Admiral Marcus and Section 31! It’s the origin of Star Trek’s greatest villain!

You can read a summary of those events on the Wikia page for Khan Noonien Singh (alternate reality):

He was born in 1970. His mother was Doctor Sarina Kaur, the director of the Chrysalis Project from its foundation until her death on May 18, 1974. (TOS novel: The Rise and Fall of Khan Noonien Singh, Volume 1)

In 1971, Khan was living on the streets of New Delhi with one leg. He was then taken by men working for Dr. Heisen as part of his Eugenics project. In 1972, after displaying his fury, Khan was given a new leg and met with Dr. Heisen. There Heisen taught him how to unlock all the knowledge of the world. For the next 7 years, Khan and other students, underwent extensive mental, physical training. Khan was also given regenerative powers. Khan then tried to escape from Dr. Heisen by digging through solid rock, greatly impressing the doctor. However he was captured by Heisen when his neural inhibitor was activated.

In August of 1985, Khan contacted Heisen to give him a gift from all the augments: their neural inhibitors. Khan told Heisen that they would leave his project on their terms, not his. Khan then killed Heisen by squeezing his skull. Khan and his fellow augments then decide to take over the world.

Not the answer you're looking for? Browse other questions tagged star-trek star-trek-tos star-trek-into-darkness or ask your own question.

36
In Star Trek (2009), Did the Original Timeline Survive?
14
Why does Carol Marcus not recognize Khan in The Wrath of Khan?
4
Was Khan a genetically-enhanced embryo?

23
Has Star Trek ever addressed why our timeline is different than theirs?
10
Why was Spock actively participating in the act to stop the volcano?
8
Which order should I read the Humble Bundle IDW Star Trek comics in?
11
Why would Admiral Marcus need Khan's help?
25
Did the creators of Into Darkness research Khan?
23
Can anyone identify the upper body garment Khan Noonien Singh is wearing in the Star Trek episode “Space Seed”?
9
Why is the Star Trek 2009 reboot called a reboot?
13
Discrepancy in uniforms around the dinner table: ST:TOS “Space Seed”
13
In Star Trek, why does Capt. Christopher lose his memory when the Enterprise beams him into his fighter jet?
11
Why did they make another prequel?