In “Medusa's Daughter” webcomic, what exactly is the nature of Maia?

In "Medusa's Daughter" webcomic, it is implied that Maia isn't exactly "normal" human, both physiologically and psychologically (she hurt at least 1 human before, and her parents I think rejected her for some reason). That allows the freak show to pretend she's a savage beast.

What exactly is the nature of her physiological and/or psychological abnormalities (real ones, not freak-show-fake ones)?

More than a cursory scan makes it rather apparent that Maia’s powers are not some fabrication of her mind, reinforced by the abusive circus employees, but quite real.

Maia Gasol is probably not the child of the woman who was asking about her. She is the daughter of an Air Force pilot. The woman who saw here was her former nanny. She was "lost" only in the sense that her nanny was watching her when she was kidnapped.

Her parents did not reject her; she was kidnapped.

Here Skelly, another circus performer, tells Maia how Rictus, the circus master, found out about her.

“Not so far from this spot, they hear rumors about a child, the daughter of an American Air Force pilot, who could move her hair to and yon and wherever she wants. Ain’t that unusual?” 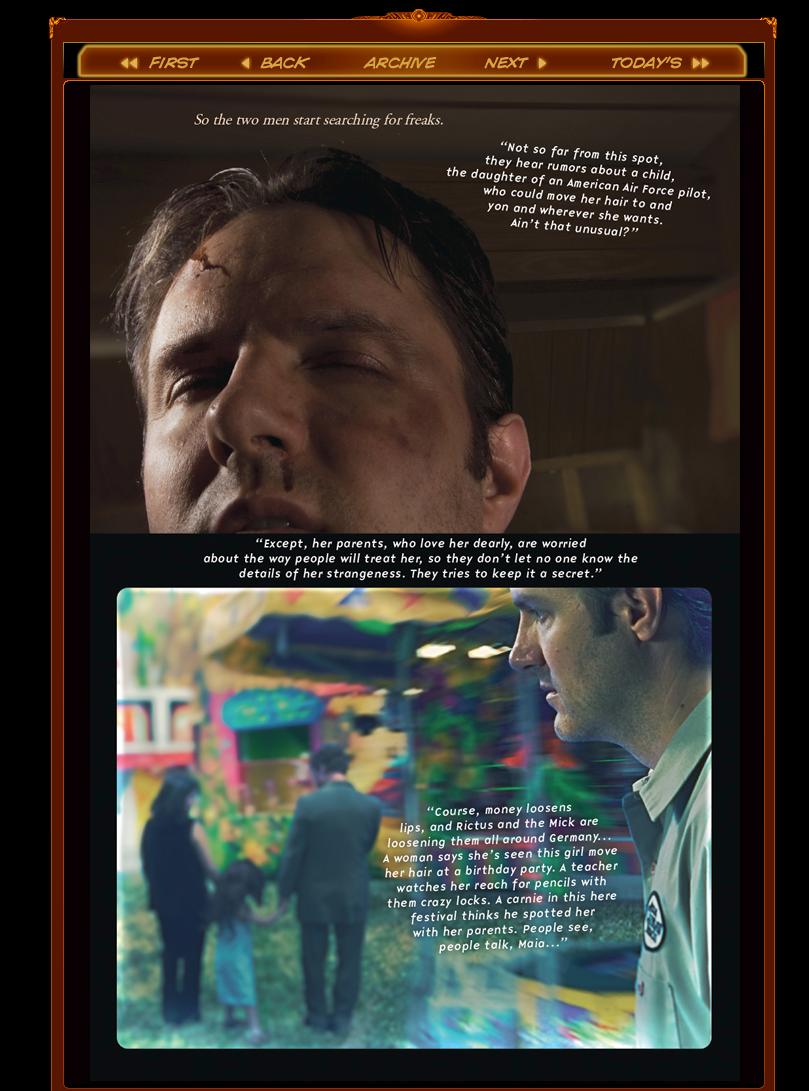 Note that Skelly seems to find this credible.

Further, Skelly was himself involved in kidnapping Maia for the circus.

“Ya was only four, but ya kicked and screamed and that hair like to snap my wrists. You wanted you ma and dad and nanny so badly, it near ruined my soul.”

Well, here’s someone besides Maia who has observed her hair moving of its own accord. 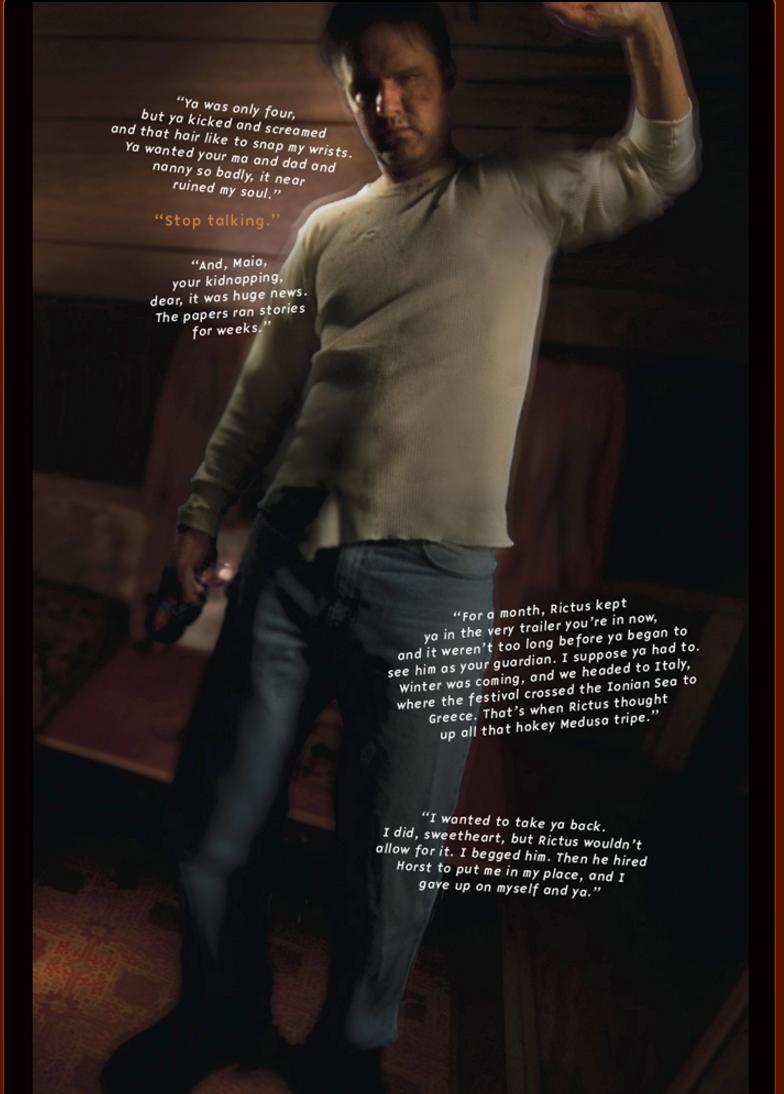 Skelly himself obviously believes that her hair can move by itself, and from the way he tells his story, Rictus and his friend do as well. Why bother kidnapping the daughter of an Air Force pilot for your sideshow unless you get more out of it than you would get from grabbing a genuine orphan from a lower-profile target in some country with less accountability?

And here Rictus certainly seems to be supporting Skelly’s story. 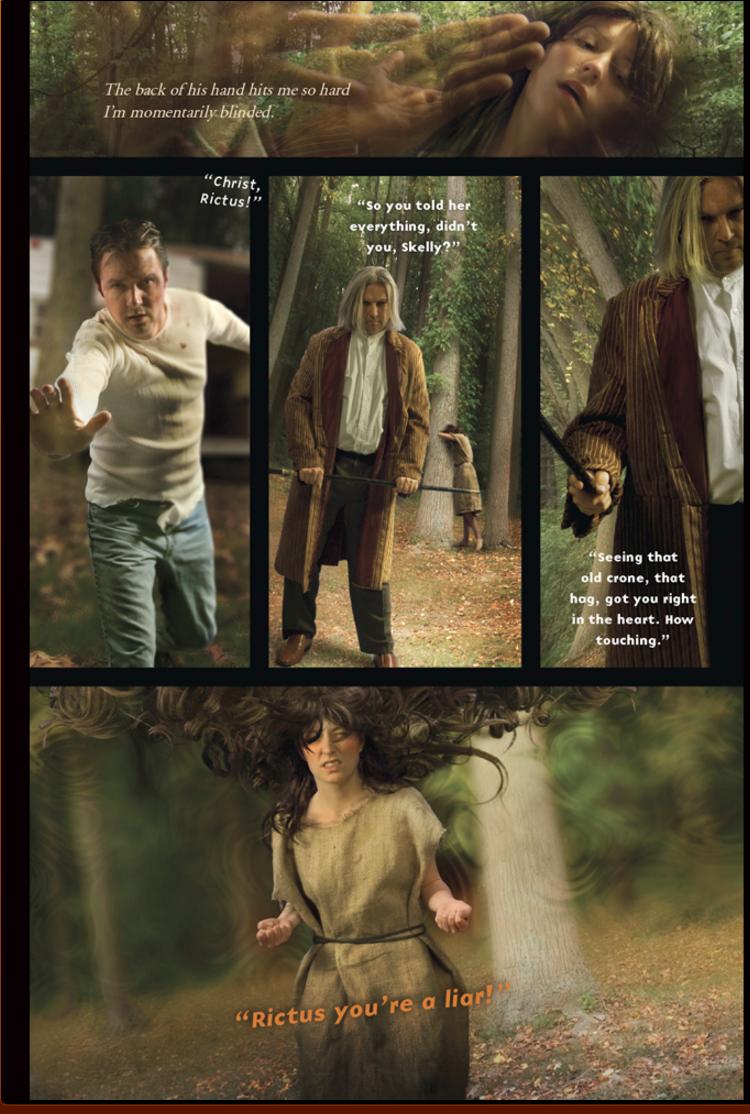 So you told her everything, didn’t you, Skelly?

And here she is choking Horst with her locks. We can’t really hope for better evidence than photographic: 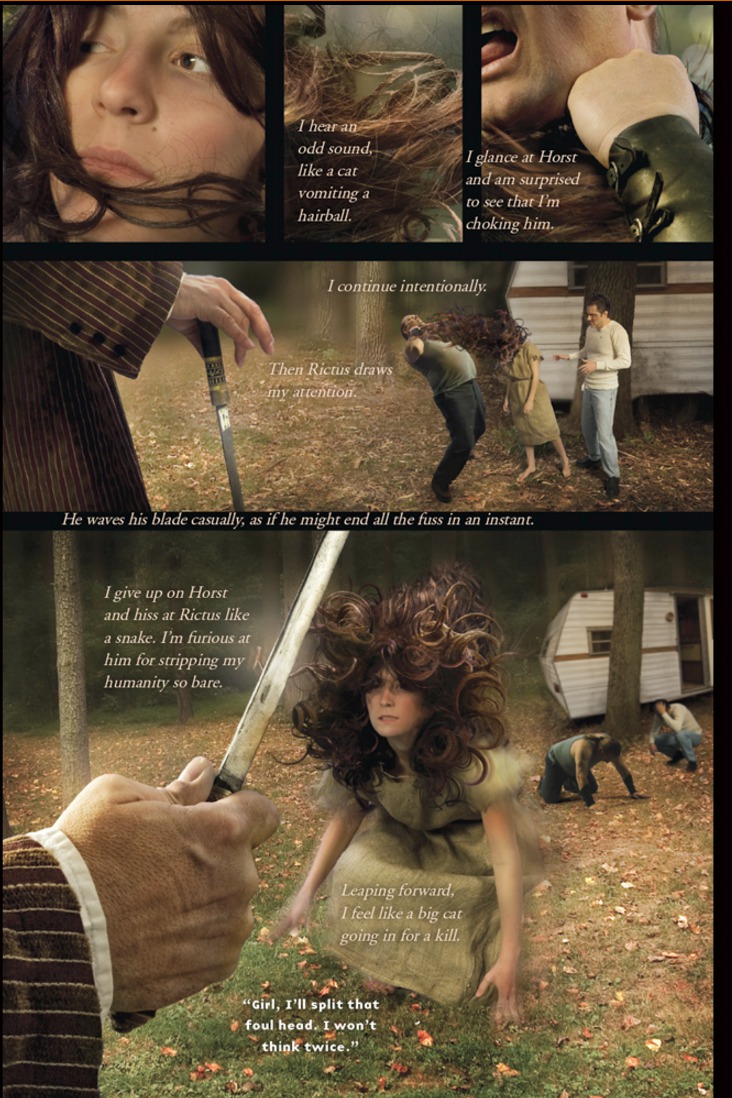 As the story is presented, it is quite clear that Maia is merely an girl with supernatural powers of autotrichokinesis who has suffered a great deal of abuse, not an traumatized survivor with extensive delusions.

As for what her powers are:

Not the answer you're looking for? Browse other questions tagged webcomics medusas-daughter or ask your own question.

3
What exactly was Cieba in “Love is in the Blood” Comic?
4
Does the “Skin Horse” webcomic continue to have Oz references?
12
Story identification: SF webcomic with two women travelling around the solar system, working?
2
What happened to Sandra's mother in “Sandra and Woo” webcomic?
3
Webcomic starring a pair of cats who move into a haunted mansion - R.O.B. the robot and spirits
10
Webcomic following a boy who's inhabited by a vengeful ghost who's after the men who killed her
0
What chapters does the fourth volume of Jason Shiga's Demon cover?
11
Identify the characters in this Doctor Who webcomic panel
6
Webcomic in which humans have animal powers; main character sets out in the world to find her missing father
10
Comic or Webcomic with a robot enthusiastically proclaiming “Krill the humans!”