Why did the Doctor start to regenerate after the events at Lake Silencio? [duplicate]

Ask Question
Asked 7 years, 3 months ago
Active 7 years, 1 month ago
Viewed 6k times
9
This question already has an answer here:
Why did The Doctor start to regenerate at Lake Silencio? (1 answer)
Closed 7 years ago.

At the start of season 6, we see the Eleventh Doctor being shot midway through his regeneration, in order to kill him.

However, we now know that this incarnation of the Doctor was the last Doctor of this cycle (the “thirteenth” regeneration), and he didn’t have a new set yet. So the Doctor couldn’t be regenerating; one shot would have killed him instantly, rather than causing him start to regenerating.

How can we reconcile these two events?

Echoing my answer here. it wasn't a real regeneration, merely a simulation. Therefore it has no impact on the Doctor's true regeneration count.

According to the official BBC's own 'Doctor Who' page, the Teselecta (AKA "Justice Department Vehicle Number 6018") is described as being able to "adapt itself to resemble anyone whose likeness it has scanned. But more than this, it can transform itself to take on the appearance and functionality of non-living matter, such as clothing or even a motorbike!"

The appearance of the Doctor's regeneration cycle particles, that presumably had been described to the operator of the holographic systems was a further example of this ability to represent non-living matter. 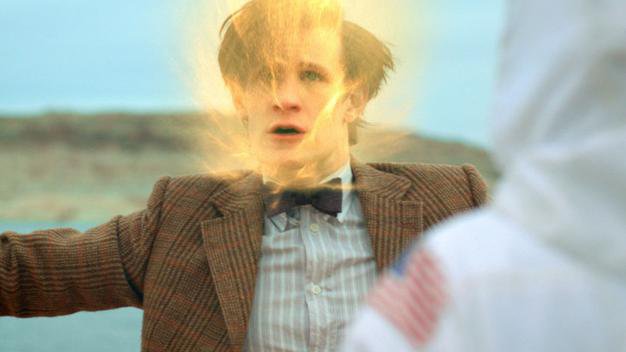 It was the tesselecta. The doctor obviously didn't want the rest of the universe to know that he'd used up all of his regenerations, so he made it look as if he'd been killed in the middle of a cycle that didn't exist.

The real question is how does he use regeneration energy to heal River Song in The Angels Take Manhattan if he doesn't have any left?

Most likely, since only the time lords knew about the War Doctor being "The Doctor" (he wasn't using the name since even he didn't count himself as "The Doctor"), and since almost no one knew about the "Meta-Crisis Doctor" that when they killed him, his enemies would expect a regeneration, so he had the Tesselecta produce the regeneration effect.

When it comes to him healing River in TATM, it's unlikely that time lords have EXACTLY enough regeneration energy for the 12 regenerations, and there is likely to be at least a little left over.

25
Why did The Doctor start to regenerate at Lake Silencio?
9
Question about episode 'The Wedding of River Song'
-9
Why exactly did The Doctor use Teselecta to fake his own death?