How does Ms. Marvel fly?

Using her original Kree-given powers, how did Ms. Marvel fly? Was this an ability that all Kree had, or was she manipulating gravity, or what? Or was it never explained past "she can fly"?

She still flies to this day, but I'm not sure if that is still due to the influence of the Kree (she's had a LOT of powersets).

Ms. Marvel was originally Carol Danvers, just a regular human working at NASA where she happened to meet one Dr. Phillip Lawson (we know him as the Kree super hero called Captain Marvel). A romance blossomed between them after he saves her life and after hearing of said romance, a Kree enemy (Yon-Rogg) kidnaps Carol to draw Captain Marvel into a trap. During the fight, the Captain shields her from a powerful, and forbidden, Kree machine known as the Psyche-Magnitron.

The machine (essentially) pushes radiation through Captain Marvel into her, which effectively mixes her human DNA with that of the Kree. The process was influenced by her wanting to be Marvel's equal, instead of the helpless girl he kept saving, as well as her dreams of flight and having super powers. As a result, the encounter leaves her with her first set of abilities: super-strength, durability, enhanced fighting skills on par with the Kree Warriors, a 'danger' sense, and flight. She adopted the name Ms. Marvel then.

Later she was in a battle with Rogue that left her powerless, eventually got herself kidnapped by more aliens (the Brood race this time), and their experimenting left her with much stronger powers than before. She changed her name to Binary for some time, but she still retained a form of flight and eventually her original, albeit enhanced, powers came back to her, where after she returned to the Avengers.

SFF.SE's own Brett White caught up with Kelly Sue DeConnick at HeroesCon 2012. She's going to be authoring Ms Marvel as Captain Marvel and he asked her the question. Her answer:

The panel Kelly refers to is from Ms Marvel #2: 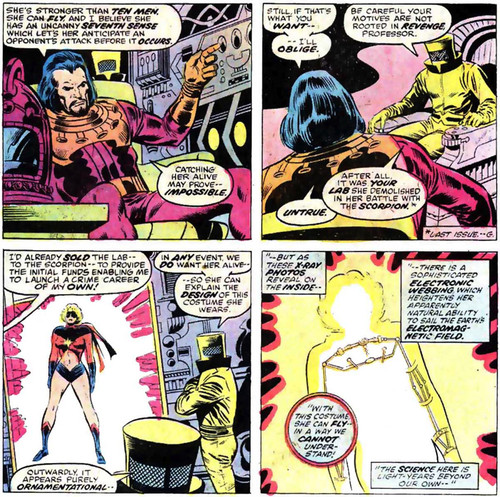 As you can see it explicitly explains her ability to fly.

Not the answer you're looking for? Browse other questions tagged comics marvel powers or ask your own question.

16
Which Marvel character had a bomb in his heart which would explode when his heart stopped?
3
How come Mimic needs glasses like Cyclops?
10
Crazy comic that I read in 80's (Probably Marvel)
12
How does Zola end up like this in The Winter Soldier?
9
Why can't Jessica Jones fly?
14
Trying to identify an old Marvel Comics robot villain (not Ultron) from the 1970s?
8
Why does Skye / Daisy / Quake use such a limited version of her power when fighting?
12
How can Captain Marvel breathe in space?
27
How does Rogue from the X-Men fly?