Significance of the word Bort!

The 'Saturday Morning Fun Pit' (Season 8, Episode 6) episode of Futurama has three different segments. The second is set in a 'Purple Cartoon' that is made to push a breakfast cereal made from Purpleberries. Most of the usual characters are used as the residents of Purpleville(?), while the professor is the bad guy, and Zoidberg is his side-kick. A typical exchange between them goes like this.

Professor Hubert Farnsworth: I must get my hands on those healthy Purpleberries!

Given the Futurama writers are known to throw in many 'in jokes' into the series (it was only recently that I discovered the connection between Futurama's constant depiction of owls and Blade Runner) I was wondering:

Is there any special significance to the word "Bort!"?

I thought he might be saying "Bought!", but that ..is just not especially funny. Also it is said as a longer, more drawn out word, and he seems to emphasize the 'R'.

There are two possibilities.

It could a Simpsons tie-in, albeit a very loose one. It's used in an episode of The Simpsons that parodies the old Adam West Batman series. "Bort" is one of the words that pops up while Radioactive Man and Fallout Boy are fighting villain The Scoutmaster. It could also be just another case of Matt Groening making fun of the Batman series.

It is also used by The Brain in an episode of The Pinky and the Brain, as he impersonates Pinky, badly. Saying "bort" prompts the planet Earth, made sapient by one of Brain's inventions, to proclaim "Pinky no says bort" and turn on Brain. Maurice Lamarche was the lead in that television show, portraying Brain, amongst others.

I don't know why either of those would be referenced in a Strawberry Shortcake/ The Smurfs parody, but that's why I don't make the big bucks. "Bort" certainly isn't used in either of those shows. Being the father of a toddler has made me sure of that.

I'd forgotten about James Sheridan's instance from the Radioactive Man episode, but I remembered another time that it popped up in Simpsons.

During the episode where they go to Itchy and Scratchy Land (Season 6 Episode 4), Bart is looking for a personalized license plate, and there is no space for "Bart", but they're sold out of "Bort" plates.

This would lead further credence to it being a long-running Matt Groenig in joke. 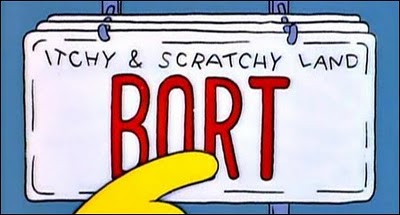 13
Who ordered the pizza Fry delivers when he gets frozen?
2
The Bermuda Tetrahedron
10
Are all robots in the Futurama universe fueled by alcohol?
5
How rich is the Wong Family?
4
Have all of the Planet Express characters voice actors heads been featured in the Head Museum?
5
Who is the President of Earth at the end of Season 4?
6
Why is Leela 'The Other'?
4
Significance (or otherwise) of the Headless Spiro Agnew