Is GRRM not killing people anymore?

After reading A Dance With Dragons, I recognized a feeling that nobody seems to have died in the book. (I recall only Sir Patrek dying, that too only because of the bet). Indeed GRRM seems to be bringing back characters hitherto thought dead. Is there anybody who can compile statistics or something to prove/disprove this?

To clarify what I mean, I don't recall any major PoV dying. With no king dead, two characters brought back from the dead, and one major character not as dead as cliff-hangerly hinted at.

Your memory is a bit dodgy, I'm afraid. Major characters dead (or presumed/reported dead) in A Dance With Dragons include:

Well, I don't have a statistic, but I think that this image, in which a Reddit user tabbed their books with a post-it for every death in the books - answers your question insofar as whether people die in A Dance of Dragons: 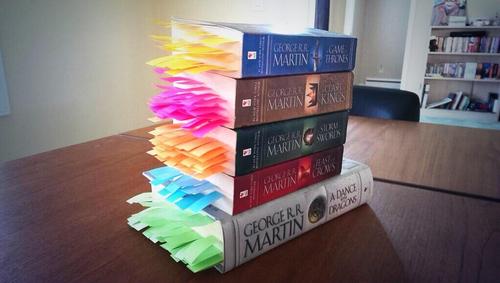 31
Why did Arya just walk away instead of killing this character?
23
What is this method of telling time that GRRM uses?
13
Why is he still Brynden Rivers and not Targaryen?
26
Does anyone ever explain why no one in the south cares about the Wall anymore?
31
Has GRRM ever confirmed that he named some ASOIAF characters after the Muppets?
5
Why did Prince Doran not join Renly Baratheon?
40
Why do people in the North take the Wall so seriously?