Old movie with abandoned spaceship and skull in helmet

I remember a scene from a movie or TV series that I saw in the 80's. It was set on what I think was an abandoned spaceship. An astronaut (main character?) finds a dead crew-member in full space-suit, covered by dust. He (she?) carefully whipes off the dust on visor and reveals the skull of an alien with sharp teeth.

I know this is very thin, but hopefully somebody know what I'm talking about. I've looked through the epguides for the Twilight Zone (1985 version) since i remember following that series, but it doesn't fit any episode. It's very possible the movie was made in the 70's and is more horror than SF.

While looking I came across Old movie with abandoned spaceship on this site, but it's not The Starlost or any old "tacky" series like that. 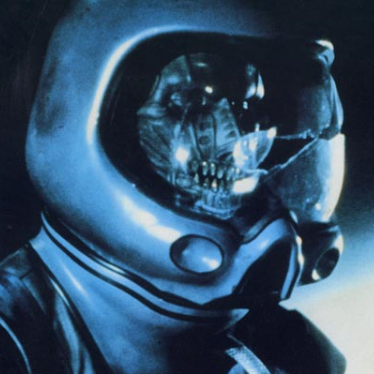 It is the story of some astronauts who stumble on a creature which can control the dead.

There is a scene in the trailer which might be the scene you are thinking of - but it is very grainy and hard to tell.

Although this is a very common depiction in science fiction, here are some suggestions to jog your memory: 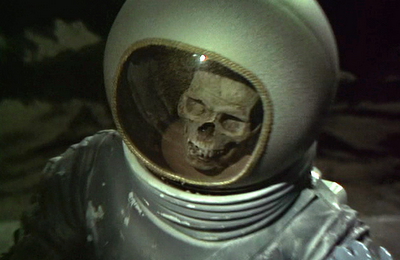 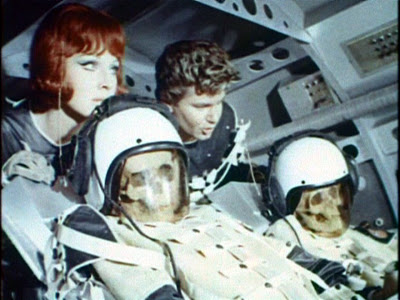 There's an illustrated synopsis of "Enemy Mine". I've seen the movie and can't recall a skull-helmet scene fitting in anywhere.

I think i recognize this scene from the movie Enemy Mine (1985).

6
70s(?) movie with abandoned spaceship, onboard computer can answer simple questions, talks about "warning the bridge" when asked elaborate questions

10
What film or TV episode had breathing bags in it?
12
What 80's/90's TV episode has a man escape technology in the countryside, and another hunt him down?
16
Movie with talking zombies, one zombie eats his own arm
10
70s or 80s TV Movie about an identical Earth
7
Series movie similar to "The Twilight Zone"