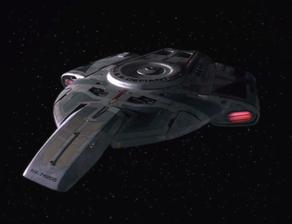 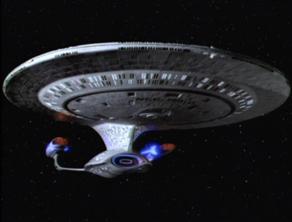 It isn't clear, but we do have circumstantial evidence that the Defiant could stand a reasonable chance against a Galaxy class ship.

1 - When battling the Excelsior class U.S.S. Lokota in Paradise Lost, the Defiant was able to come out on top, despite trying to avoid serious damage.

2 - During the rescue of the Cardassian high council in the Way of the Warrior, the Defiant was able to drop its shields while being attacked by a Vor'cha class Klingon battlecruiser. The Defiant did use the tractor beam to reduce the effectiveness of the attack, but it still had its shields down and had dealt with two Birds if Prey first.

3 - The mirror Defiant was able to take out the mirror equivalent to the Neg'var, the Klingon's most powerful ship. They had some help from Rom which caused a power failure, but the Defiant was still putting up a strong fight.

5 - It took a heavy beating from the Borg, but was still in very good condition considering. Most of the repairs were able to be completed in a few days, considering the bridge showed no signs of the battle in In the Cards, which occurred a few days after First Contact.

58
Why aren't there any main Federation battleships in the Star Trek universe?
18
What is the difference between photon torpedoes and quantum torpedoes?
-4
Is the USS Defiant (Defiant class) or the NCC 1701-E Enterprise (Sovereign class) a stronger ship for battle?