I saw this between 1996 and 2006 for sure. It was a short term video (maybe an episode? I already searched in Outer Limits, Twilight Zone and alike with no luck)

It was about an alien warning, posing humanity some kind of dilemma: If we deliver some humans for them, they would allow the rest to continue living, if we refuse to cooperate, we all would die.

I think (but not sure) that there was some kind of UN scenery (some tribute to "To Serve Man" for sure) and media coverage about what would our final decision be; I remember a final view of an UFO over a building or skyscraper with some kind of ray for people being abducted/delivered.

The main thing was the dilemma for us whether to adapt and survive through betrayal or refuse and perish.

The central storyline initially seemed like a kind of Independence Day meets Children of the Damned mash-up, with every child on earth periodically possessed by an evil alien race known simply as "The 456" and scarily intoning "We are coming! We are coming!" over and over again.

Naturally Captain Jack Harkness and the Torchwood team get cracking investigating the spooky goings on, and before long the British government, UNIT and the US army are all involved in what has become a world-wide emergency.

What starts of as a seemingly standard alien invasion story turns far more sinister, as it emerges the "456" are demanding to beam up - for their own sinister purposes - 10% of all the children on earth. 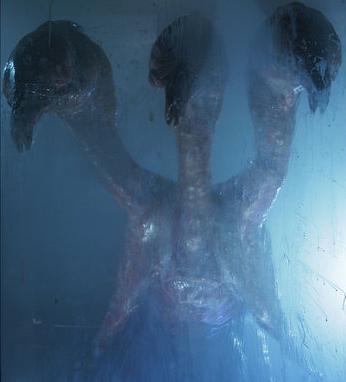 This sounds like it could be "Cosmic Slop" episode "Space Traders" from 1994 starring Robert Guillaume. In part one, A conservative African American politician must choose between his people's survival and appeasing his white colleagues when space aliens propose to share their profound knowledge in exchange for all black people on earth.

Robert Guillaume is shown being taken up to the alien spaceship via a light beam.

It is based on "The Space Traders" a science fiction short story by Derrick Bell. The video can be found at the link below:

Not the answer you're looking for? Browse other questions tagged story-identification tv aliens or ask your own question.