I read this sci-fi novel for young adults when I was a kid, and I would love to re-read it but I can't remember the title. I remember the copy I borrowed from the library had some sort of television with a man's face in it on the cover. Trying to recall this is like trying to recall a dream, but I distinctly remember reading it. If anyone can help, it'd be much appreciated!

Plot
The plot involves a girl named Sarah who is close with her grandfather. Her grandfather named her Sarah after a girl he once loved by the same name.

Toward the end of the book, she is with her boyfriend and cuts her finger off but doesn't feel anything. She at some point realizes that she is a robot -- her grandfather had once told her that in order for someone to travel through time, he/she must die, have their dead body surgically transformed into a robot, and come back to being as this robot.

As it turns out, she finds out that her boyfriend with whom she is in love is actually her grandfather because she is really a robot (after her grandfather has turned her into one in the future) and has traveled back in time.

I'm pretty sure it is The Eternal Enemy by Christopher Pike.

The story is "The eternal enemy". You can read a recap here. 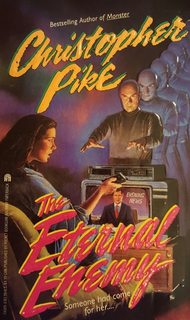 The main storyline follows Rela, a teenage girl who acquires a state-of-the-art VCR that, much to her amazement, shows events in the future. She then proceeds to attempt to avert fate repeatedly. After averting her own death, and spotting a creepy man in a jogging suit with now seams, the twist you remember is revealed.

Creepy dude comes in and takes the bandage off Rela's hand from where she cut it at the party. He then PEELS THE SKIN right off with it. All the skin from her hand. Yet, she feels no pain. RELA is Robotic Experimentation Logistical Algorhythm. The guy is Grandfather. He's gonna destroy Rela with a ray gun, but first...

Remember Sara? Born in 2036 in LA, in the aftermath of a world war and during an American depression. Sara's grandfather disappeared when she was 10, and reappeared when she was eighteen. He told her about some stuff he'd been working on in the meantime... i.e. making human cyborgs that can travel to the past. You know, everyday stuff.

Not the answer you're looking for? Browse other questions tagged story-identification books time-travel robots or ask your own question.