If Data's memory was stored multiple times with the ship's computer, and also backed up with B-4's brain, why didn't Starfleet just remake the android body and "revive" him?

From what I understand the technology and research definitely existed and Data was of course a very useful and high-ranking officer.

The short answer is that while parts of Data's body are relatively easy to fix and/or replicate (something we see on several occasions) his Positronic Brain was not.

The only three stable positronic brains created in Federation history were all "Soong-type" androids; Lore, Data, and Juliana Soong. The one time an effort was made to replicate Data's positronic net (TNG: "The Offspring") the android that Data created, known as Lal suffered a massive positronic cascade failure, and ceased to function.

Data was able to access a store of parts from his father's laboratory (see pic below from TNG: Datalore) but there's no indication that any of these contained a redundant brain.

And yes, that's really Brent Spiner's butt in the picture below. 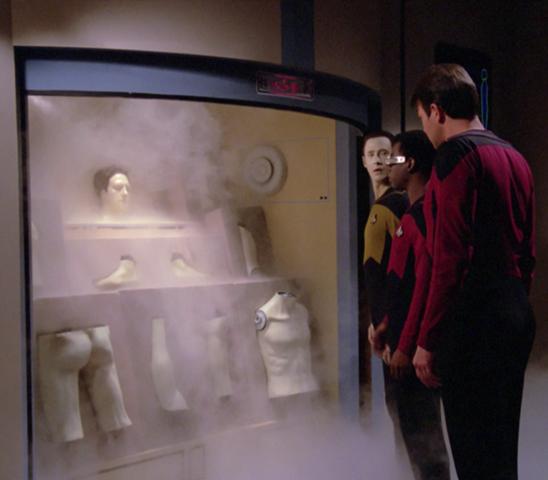 The main technical challenge is not memory, but with the artificial brain itself. In one episode Data created an android brain and made Lal (practically his daughter), but it became unstable and shut itself down. Data would not try again until he knew how to create a stable one.

Additionally, Data is said to have a "positronic" brain. The term comes from the robotics series written by Isaac Asimov. In the Asimovian universe, each positronic brain has a unique pattern generated from a quantum process which cannot be duplicated. Even if you constructed another positronic brain with the same memory, it would essentially be another android as their thinking pattern would be different.

12
How Can Replicators Work Without Mass/Energy Conversion?
9
Is there a canon explanation of WHY Data chose to enter Starfleet Academy?
6
Why didn't Data stay onboard the Enterprise during the Baryon Sweep?
8
Why didn't Data subdue Worf?
12
Why does Data want to be human?
81
Does Data need to cut his hair?
43
How can Data be property of Starfleet?
21
Which Sci-Fi work first showed romance between a human and an android?
5
Any indication that starships use cloud storage when necessary?