When did Star Trek stop using (real) models for exterior shots of spacecraft? I recall that there was an actual DS9 model and NCC-1701-D that were up for sale, but I don't think there was a Voyager.

Enterprise was the first series to have absolutely no models. To provide a quote from that article:

With Enterprise there are no models, not even a visual model for the ship except for a paper version created in order to envision how certain shots might work. "I guess in a sense it is a precedent, Voyager being the last one to use practicals, even though they went away from them in the end," notes Bonchune. "This show is all CGI. We built a CG version of a real ship, with the difference being in the small details. You can sit on the hull on certain parts of the ship. You can keep a camera flying in so you can see writing on small panels on the cargo doors. If it was a filming miniature, you could never do that."

CGI became good enough for cheap enough that it could be used instead.

Voyager was also the first Star Trek TV show to eliminate the use of models for exterior space shots and exclusively use computer-generated imagery (CGI) instead. Other television shows such as seaQuest DSV and Babylon 5 had previously used CGI exclusively to avoid the huge expense of models, but the Star Trek television department continued using models, because they felt models provided better realism. Amblin Imaging won an Emmy for the opening CGI title visuals, but the weekly episode exteriors were captured using hand-built miniatures of the Voyager, shuttlecraft, and other ships. That changed when Star Trek: Voyager went fully CGI for certain types of shots midway through Season 3 (late 1996).3 Paramount obtained an exclusive contract with Foundation Imaging, the studio responsible for special effects during Babylon 5's first three seasons. Season 3's "The Swarm" was the first episode to use Foundation's effects exclusively. Deep Space Nine started using Foundation Imaging in conjunction with Digital Muse one year later (season 6). In its later seasons, Voyager featured visual effects from Foundation and Digital Muse. 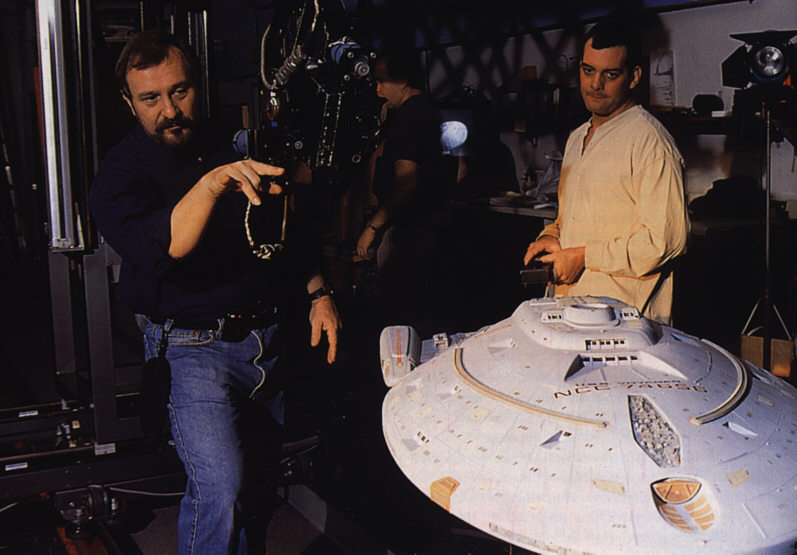 14
What Happened to the Original Models from “Star Trek?”
18
What's the full-form & significance of USS & ISS prefixes in name of Star Trek starships?
11
Why does the model ship in Picard's ready room change?
9
Crew quarters on the Enterprise in Star Trek (2009) and Into Darkness
12
Is there any out-of-universe meaning to starship registry numbers?
11
Why did DS9 need a Science Officer (pre-wormhole!)?
11
Which ship has made the most first contacts?
41
What was the first 3D CGI used in Star Trek?
10
First use of the term “turbolift” in Star Trek?