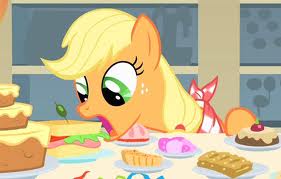 4
Are only hoofed creatures sentient?

9
Are earth ponies represented in the government of Equestria?
3
Why do the Apples have such a strong accent?
5
Was the ponies' knowledge of Night Mare Moon retconned in "Luna Eclipsed"?
2
Why are the pony engineers pulling the train in Over a Barrel?
10
What are the rules for using "Nobody" and "Nopony"?
2
Can multiple ponies have the same special Talent?
5
Who are the two yellow mares in the season 5 poster?
2
What is the weight of ponies of the My Little Pony universe?
4
Do the ponies of Equestria have non-exile space travel?