How did half of Darth Maul survive?

From what I have read on Wookieepedia, Darth Maul survived by using the Force, drawing from his hate to hang to a air vent, but then what? He crawled to a spaceship with his entrails sliding out?

Wookieepedia has the answer, with references:

However, Maul managed to survive his defeat at the hands of Kenobi. Through his hate and will to live, as well as his hatred against Kenobi, he reached out with the Force and grabbed an air vent.3 He went down the reactor shaft and landed in water. The Sith Lord was then dumped into a container, which was taken to Lotho Minor. As he lay submerged, he fell into unconsciousness, cursing Kenobi.

Here's the proof from the first book, regarding air vent:

As his remains tumbled down the generator shaft, he kept his eyes open and fought to remain conscious. But then his head struck the shaft’s wall, and everything went dark.
No!
His mind screamed. Despite everything he had learned about death and duty from his Master, Maul knew he was not yet ready to die. Not after so many years of training, and with so much more to accomplish. Not so long as he still had so much hatred within him.
...
Can’t die!
He fell past an oval shadow, and then a similar shadow raced by, along with a whooshing sound.
Maul hoped that there was at least one more vent below, that it would be large enough to accommodate his diminished body. He extended his arms, and his left hand’s fingertips suddenly burned with friction as they brushed against the cylindrical wall.
Must live!
Hoping, wishing, praying for one more air vent...
Must kill Obi-Wan!
...he reached out with the Force.

IMAGE: 2 halves of Maul lying in some sort of a sludge pool
Obi-Wan: "The Sith crave life above all else, Padawan... They wish to control it, dominated it, and thus cling to it with every fiber of their being

IMAGE: Maul looks really angry
"I believe Maul's rage was so powerful, and his knowledge of Dark Side so great, he simply refused to die.

IMAGE: Maul's body being sucked down the drain with the sludge
"... But it is not impossible that 'other forces' contributed to Maul's survival

... And on Page 26/27, they show him falling into some sort of a vat, and a ship picking up those vats and dropping them off on Lotho Minor: 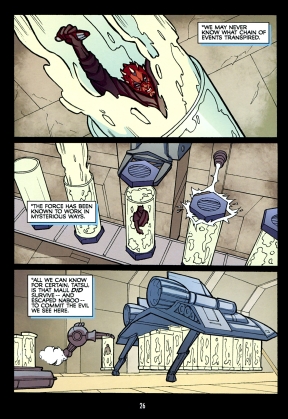 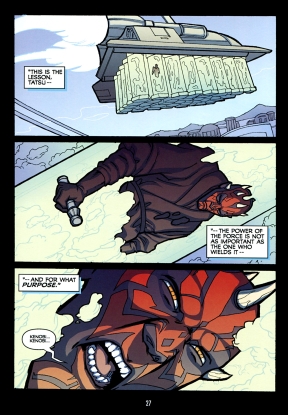 Maul was so furious at being defeated by Obi-Wan that he was able to use his anger and thirst for revenge to keep himself alive.

Q: How does Maul survive being cut in half?

A: The power of anger! Maul draws on his master’s dark side lessons to harness his rage and stay alive after Obi-Wan maims him in a duel in Naboo. Rumor has it that his top half fell down a reactor shaft into a trash container, which was then shipped to Lotho Minor.

This came at a price, though: Maul lived in constant agony and was driven half-mad, with no memory of the Sith he had once been. Only through Mother Talzin’s dark side magicks was his memory restored.

Employing strong negative emotions such as rage has always been a sure-fire route to great dark side power:

He falls and Luke is preparing to leap down after him when he hears the Emperor behind him.

“Good. Use your aggressive feelings, boy. Let the hate flow through you.”

Again, the Emperor is telling the truth and Luke knows it. He has won, but only by using the dark side of the Force. The hate is flowing through him and he is winning this battle against his father because of it.

In fact, it seems possible that something similar may also have aided in Darth Vader’s survival on Mustafar. Certainly he had plenty of hatred and anger going on there.

The strength of Maul’s hatred is such that he’s still trying to kill Obi-Wan as of the Star Wars: Rebels era, some three decades later.

In addition, different Force users can have different talents, somewhat independent of their raw power in the Force. Quinlan Vos could gain impressions of an object’s past by touching it, whereas Mother Talzin could create objects (such as a sword for combat) out of dark side energy. Presumably Maul has a particular aptitude for using the dark side to keep himself alive.

It’s also probably worth noting (though this has not been mentioned anywhere) that, as a Zabrak, Maul may have had a somewhat different organ layout than the standard human, which might have aided him in surviving. Further, the lightsaber may have provided some degree of cauterization, which would also be helpful.

The problem with this is that the movie doesn't show any evidence of him surviving as far as in the films..

In other media he survived after his defeat... for instance in the cartoons...

In the fourth season, Darth Maul himself returns. Having survived his bisection, Maul was striving to survive by any means and ended up on the junk planet Lotho Minor in the Outer Rim and turned into a cyborg with an arachnid-like lower half and managed to survive with the help of Anacondan Morley. Over the decade, Maul's mind sank into a melancholy insanity before he was found by Savage Opress. Savage's presence causes Maul to remember his downfall and resolves to have his revenge. Brought back to Dathomir in the aftermath of the Nightsisters' slaughter by Count Dooku's Separatists droids, Maul undergoes a purging of his madness and is given a new pair of robotic legs crafted by Talzin's magic. With his mind restored, Maul learns that the Clone Wars have started without him.[4] With Savage's help, he proceeds to extract revenge on Obi-Wan Kenobi by luring him into a trap by attacking a small village on outer rim planet Raydonia, knowing that the Jedi will come to assist. However, Asajj Ventress's unexpected appearance to collect a high bounty placed on Savage thwarts Maul's plan. Kenobi and Ventress duel Maul and Savage in the cargo bay of Savage's stolen ship but soon realize that they are outmatched and are forced to flee via the cockpit escape vessel. Maul decides not to pursue the jettisoned pod but to wait for another opportunity, realizing that the Jedi already know of his continued existence through the Force.[5]

As stated by a previous answer he survived through his rage

Through his intense rage, Maul was able to survive and escape to the junk fields Lotho Minor, where he spent the next twelve years of his life with little to no memory of his former self.

2
Did Maul find a way to prevent death using the dark side of the Force?
0
How did Maul get off of Naboo?
9
Did Emperor Palpatine Know Darth Maul Survived?

31
How powerful was Darth Maul?
23
Why Didn't Darth Maul Slice Obi-Wan When he Jumped over Him?
45
Why did Qui-Gon advance against Darth Maul without Obi-Wan?
27
Why Obi-Wan wasn't able to cross all laser gates in the fight with Darth Maul?
9
Did Emperor Palpatine Know Darth Maul Survived?
8
Did Kenobi use the dark side against Maul in Episode I (Phantom Menace)?
9
What led Qui-Gon to conclude that Darth Maul was a Sith?
19
Why is Darth Maul “it”?
4
Darth Maul Timeline Inconsistencies