In episode 1 of Helix, shouldn't the CDC personnel be alarmed by the bodies of the two deceased patients?

When they arrive and view the bodies, they unzip the body bag and we see what looks like a bleached white skeleton with black goo oozing off of it. This is for a body that hasn't been dead longer than 72 hours or so. And yet 100% of the non-bone tissue has been converted into a viscous black slime.

Dr. Farragut (the CDC scientist) makes some offhand remark about hemorrhagic viral diseases. Granted, the manner in which someone dies from a disease like that is horrific, but c'mon. Could any legitimate disease specialist see such a thing and not freak out? My own limited understanding of how viruses work leads me to believe that they would be incapable of such a complete transformation of tissue. Bacteria would also not progress in such an extreme fashion.

Was his reaction plausible?

Was his reaction plausible? In two words, Hell NO! They should be alarmed and shutting that facility down with the quickness. Only on television do we show diseases capable of completely liquefying human flesh and yawn.

I am not sure where the main character was supposed to have served but unless it was another planet, I cannot imagine where he would have seen ANY terrestrial disease which could have prepared him for what we witness in Helix.

Some of the world's most dangerous diseases can cause catastrophic damage to human flesh. Ebola hemorrhagic fever can liquify cellular tissue causing catastrophic damage. But only after a prolonged illness ending in organ failure and death. Another contender for sheer destructive capacity would be 'necrotizing fasciitis' also known as 'flesh-eating' bacteria.

The incubation period for Ebola HF ranges from 2 to 21 days. The onset of illness is abrupt and is characterized by fever, headache, joint and muscle aches, sore throat, and weakness, followed by diarrhea, vomiting, and stomach pain. A rash, red eyes, hiccups and internal and external bleeding may be seen in some patients. Mortality rates are generally very high, in the region of 80% – 90%, with the cause of death usually due to hypovolemic shock or organ failure. See: Ebola Virus Disease

But few terrestrial diseases should be able to prepare him for "black soup in a bag." This disease in Helix supposedly liquefies flesh, muscle and organs leaving only a tidy skeleton as remains. 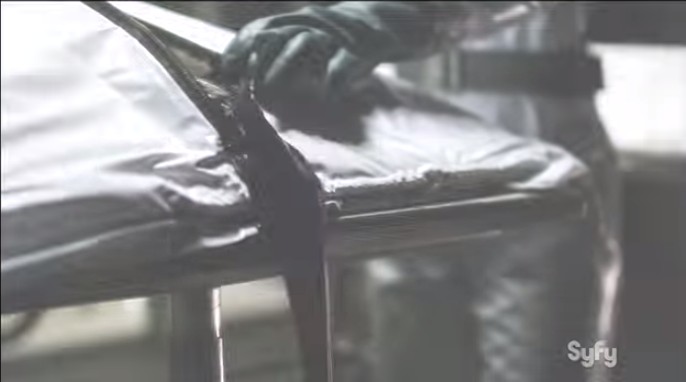 Given the graphic nature of the damage caused by ebola or necrotizing fasciitism, I still can't imagine him being able to completely ignore the virulent effects of the disease on the skeleton and the attendant black goo which oozed from that body bag. Given the nature of some of the most dangerous diseases known to man, I would be hard pressed to find or name a disease whose characteristics were as potent or terrifying.

Granted, they are being portrayed as the most hard-core and knowledgeable disease technicians ever assembled but what came out of that bag should leave the most hardened disease specialists quivering in their boots.

Not the answer you're looking for? Browse other questions tagged helix or ask your own question.