Does a lightsaber have a cauterizing effect when cutting off appendages, or not?

The reason I ask this question is because in A New Hope.. there is a scene when Kenobi cuts off Ponda Baba's arm, and we can see that it is bloody on the ground. However, if we go back to the newer (older) movies, there is a scene where Mace Windu snags the head off of Jango Fett. It appears as though it is cauterized by the heat and burning of the lightsaber itself. Also in numerous video games, such as the Jedi Knight series, dismemberment from lightsabers yields no blood and appears to automatically cauterize the wound. Any thoughts?

Edit - Almost forgot about the scene when Luke gets his hand snagged off - There is no blood!

The lightsaber is supposed to instantly cauterize the wound... from posts on

A lot of people are claiming it is simply a mistake in the first movies.

But in the Star Wars Wikia it states...

A lightsaber blade was a mass-less form that neither radiated heat nor expended energy until it came into contact with something solid. The power of the energy blade was so great that it could cut through almost anything, although the speed through which it cut depended on the density of the subject. One important note about lightsaber wounds is that they rarely bled profusely, even when a limb had been severed. This is because the energy blade cauterized the wound as it passed, and thus even a severe wound did not tend to bleed heavily.

This means you may still bleed but not a lot from the lightsaber wound.

Edit: Also want to state I looked up more about cauterization...

When cauterizing a wound with fire... It states..

Next, get a stick or something else to bite down on because you’re going to need it. If you have alcohol, pour it on the wound to clean it as best you can. Now comes the moment you’ve been dreading, but it’s a move that could save your life. Gently press the hot metal onto the wound, holding it long enough to seal it, but not so long that you’re burning into your healthy body tissue. Try applying it in short bursts so you don’t overdo it, checking the bleeding as you go. When you don’t see any blood flowing, it means you’ve done a bang up job.

From this we can gather that cauterizing a wound sometimes takes a couple of tries... Even though a lightsaber may cauterize stuff instantly, perhaps it doesn't "always" stop 100% of the bleeding.

I think the difference is Ponda Baba had non-human physiology. His arm appears to be resemble a blood-filled tube (i.e., a huge combined vein/artery in the middle of it). As such, it couldn't be expected to cauterize as efficiently as human arm when cut off by lightsaber.

First let me start by saying this is something I've discussed with quite a few fans in my personal quest for an answer.

To the first point: Everything I understand about the lightsaber would lead me to believe it would cauterize the wound upon passing through, but I don't think you could cauterize a knife wound with a lightsaber. I've never used heat to cauterize a wound so I cannot attest to that specific post, but what I've learned in the military tells me that post is correct. should happen fairly quickly, but it may take a second press.

So in the Star Wars universe I know of only one other time a lightsaber produces blood, and its from a humanoid. When Obi-wan slices Darth Maul in two, a spray of blood a la Kill Bill can be seen, if only quite briefly. Since we see a few seconds later that he is indeed cut clean in half, we cant assume he only partially cut the body leaving a segment to rip or still be connected etc etc. As far as Ponda bleeding, I'm gonna side with the previous comments there. His physiology is likely not like ours with tiny veins carrying blood, but possibly more like a spider whose limbs are simply liquid filled cavities with organs kinda floating in it.

Other than that, its all speculation on an alternate universe, so the answer could simply be, "Because Star Wars."

I think the answer is more basic than that: Lucas didn't understand that the extreme heat of a lightsaber would cauterize the wound. Given the fact that you DON'T see blood in modern SW films, I think it's just the case that he knows something about physiology that he didn't know in 1977. The explanations about alien biology are not actual, canon explanations - they are fans trying to come up with ways to make that scene plausible. There's nothing wrong with that, but I think it needs to be understood as a separate thing altogether from the much more likely scenario that that scene plays out the way it does for no other reason than that Lucas just didn't know such a wound would be cauterized and not bleeed.

It has been confirmed that Ponda Boba's species have the same blood system as a spider in current canon. The wound wouldn't cauterize as efficiently. Darth Maul is a zabrak who have more resilient skin. The tissue is too tough to cauterize instantly.

Lightsabers have occasionally explicitly been described as having a cauterizing effect. For example, when Anakin beheads Dooku, the novelization describes the wound as "cauterized" (of course, the movie supports this, since we don’t see any fountain of blood):

The severed head’s stare was fixed on something beyond living sight. The desperate plea frozen in place on its lips echoed silence. The headless torso collapsed with a slowly fading sigh from the cauterized gape of its trachea, folding forward at the waist as though making obeisance before the power that had ripped away its life.

Even when the word “cauterized” is not used, the films generally show things this way, as well as not showing any blood. 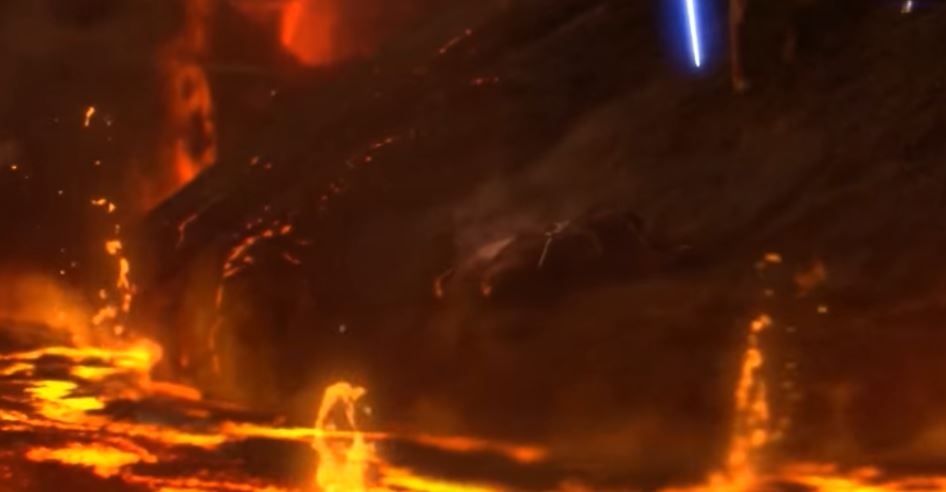 The books also almost invariably show severed body parts as exhibiting some degree of burning (if it’s mentioned at all).

He was looking at a hand. The hand had brown skin. The hand held a lightsaber. The hand had a charred oval of tissue where it should have been attached to an arm.

And wounds are often explicitly described as having no blood:

“This is what happens to those who would resist the Empire,” the gray creature said.

He threw his still-spinning lightsaber at Kolvin and sliced him in half. Kaeden screamed, expecting fountains of blood, but both halves of the body thudded cleanly to the ground and did not so much as twitch.

It’s perhaps worth noting that the new novelization of A New Hope describes Ponda’s arm as "sizzling" after being cut off, so there’s definitely still heat at work:

Han could have sworn the severed arm—not to mention the creature’s remaining stump—was still sizzling when the old fossil calmly switched his blue laser sword off.

The Princess, the Scoundrel, and the Farm Boy

On the other hand, it’s difficult to argue with the film. Even in new and improved versions of A New Hope, the arm is definitely bleeding.

So Ponda’s arm definitely was not cauterized. As to why, there are lots of potential explanations, though I’m not aware of any canon one (yet). Most likely, Aqualish have a bizarre physiology, which means that their blood doesn’t boil or coagulate until temperatures are much higher than for humans (or at all). Weirder things have been seen in Star Wars.

69
Why does a lightsaber turn off when a Jedi dies or drops it?
18
What advantages/disadvantages does a Darksaber have over a lightsaber?
10
Why do the training drone's shots not bounce off the lightsaber?
29
When does Luke's lightsaber first appear in the Star Wars saga?
2
Why did Mace Windu kill Jango Fett?
7
Does the kyber crystal used in a lightsaber have an effect on the user?
20
Why does Darth Tyranus have a quillon on his lightsaber?
16
Are these scenes from the Star Wars prequels reused in The Book of Boba Fett?