Books in the near-future with an American football-type game, superhuman players

This series of books set in the nearish future focused of a star of an American football type of game, where the players were superhuman, and I think the ball itself may have been spiked?

I think it was kind of a Rollerball for kids, but I remember it had illustrations and followed the hero having found out that his world was not what he thought it was. 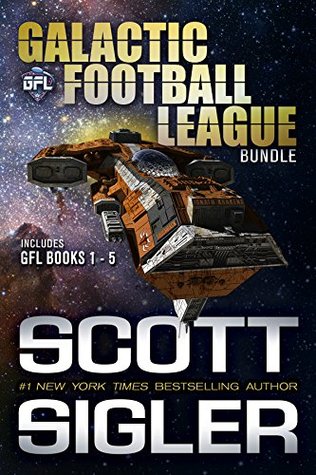 You may be thinking of the Galactic Football League, a series by Scott Sigler. As of 2018, it consists of five novels:

The author has a number of other novels and shorter works set in the same universe and connected to the GFL storyline in various degrees.

The alien players are capable of superhuman feats:

Set in a lethal pro football league 700 years in the future, THE ROOKIE is a story that combines the intense gridiron action of "Any Given Sunday" with the space opera style of "Star Wars" and the criminal underworld of "The Godfather." Aliens and humans alike play positions based on physiology, creating receivers that jump 25 feet into the air, linemen that bench-press 1,200 pounds, and linebackers that literally want to eat you. Organized crime runs every franchise, games are fixed and rival players are assassinated. Follow the story of Quentin Barnes, a 19-year-old quarterback prodigy that has been raised all his life to hate, and kill, those aliens. Quentin must deal with his racism and learn to lead, or he'll wind up just another stat in the column marked "killed on the field."

Although the series takes place 700 years from now rather than in the near future, there is, as you suggested, the notable detail of a spiked ball:

The spiked ball made it second down, 10 yards to go on the Coranadillana 34.

I think it was kind of a Rollerball for kids, but I remember it had illustrations and followed the hero having found out that his world was not what he thought it was.

I haven't read the series, so I don't know whether it has these elements.

6
1970s Greek Mythology schoolbooks with kids who “discover” mythology
13
Short story about (American) football becoming more violent and fans taking part in fights on the field
14
Comedy: Human-like aliens disintegrate a football (soccer) referee in the middle of the game
5
Novel about a violent televised Football game played in an area of the actual city. Very similar to Rollerball
6
Graphic novel following a female character getting recruited into a revolutionary anti establishment type war
6
A girl raised by a robot, utopian children's book
4
Old 3d cartoon show about playing soccer in space to save earth from planet conquerors?