Name of book similar to Joe Haldeman's “The Coming”

I'm trying to find the name of a book I read a long time ago. The basic plot is that science/technology has been outlawed and some guy is illegally listening to the skies. He receives a signal from space and is killed after relaying it to a colleague. This kicks off a cross-generational story of decrypting the message, rebuilding our science and technology education programs and building a spaceship to meet the coming aliens.

Some tidbits I remember:

the alien ship which they meet towards the end had one person on it, a human, and I think that ship used nuclear pulse propulsion. The ship the people of Earth made traveled a lot faster (I think using a bussard ramjet?). The Earthlings travel on to the alien home world which it turns out is full of humans as well.

You are likely looking for the series of books which is the Trigon Disunity published from 1985 to 1987.

The first book, Emprise - though the cover you likely remember is: 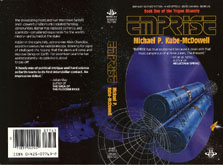 The Wikipedia Summary of the book is:

The world has been devastated by the Food and Fuel Wars turning once-powerful nations into loose groupings of isolated farming communities. Barter has replaced currency, and scientists — blamed for the world's misery — are burned at the stake. Hidden in the Idaho hills, astronomer Allen Chandliss struggles to maintain his primitive radio telescope, listening in secret for signs of the intelligent life, which may be the only hope to improve things on Earth. After seventeen years a repeating signal is received from Cassiopeia. He manages to send a message to a group of scientists in England. The race is on to decode the signal and then find the resources to respond to it...

The Second book in the series Enigma 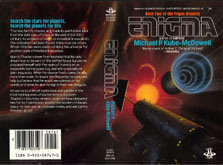 Set 150 years after the events of the first book, the 'aliens' turned out to be human and considered themselves to have been colonized from Earth in the distant past.

which is a key part of the match to your description.

As mentioned, this is a trilogy and a third book Empry 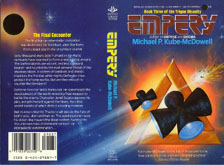