What is the Speaker for the Dead cover depicting?

To me, it seems that whatever is on the cover of Speaker for the Dead--it appears to be a docking location for starships--is entirely unrelated to the story.

Am I missing something?

Is it depicting something from one of the other stories? (This seems highly unlikely, considering that Speaker was the second book written in the Ender saga)

Or is it just a science-fictiony looking picture that the publishers thought would sell more books than an image of anything that is actually in the story? 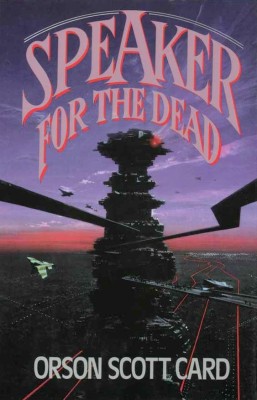 The image was created as a bespoke image for the Pohl book, then simply re-used as a stock cover image for OSC's 'Speaker for the Dead' without bearing any particular relation to the actual plotline.

The same technique (e.g. placing unrelated cover images by John Harris) was used for the three other books in the original Ender Series. Ender's Game used a picture called "Drunkard's Walk" that was originally a bespoke picture created for another Frederick Pohl book of the same name. Xenocide and Children of the Mind also used untitled stock illustrations, several of which can be purchased on John Harris' website. 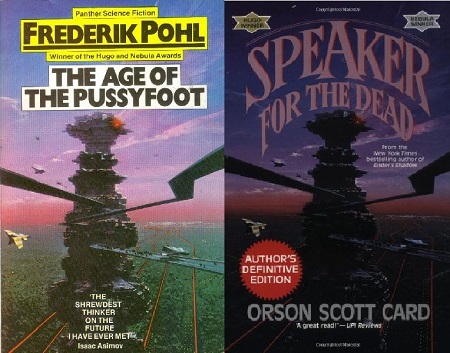 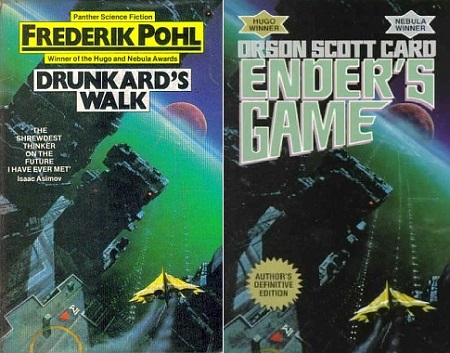 While I wasn't able to find the exact details, I found a pattern that seems to point to OSC books being given unrelated covers (on top of the well known and not-in-need-of-discussion trend of giving ALL SciFi/Fantasy books loosely-to-none-related covers :)

The first edition of Ender's Game, published by Tor Books in 1985, featured cover art by British artist John Harris, one of the best known Sci-Fi concept artists. This is the image most strongly associated with the book as Tor kept it alive through decades of hardcovers, paperbacks and reprints. However, this artwork has actually nothing to do with Ender's Game as it was originally created for a 1982 re-release of Frederik Pohl's classic SF novel Drunkard's Walk, which is also the title of Harris's image.

(images copied from the above blog) 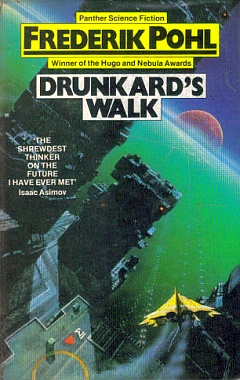 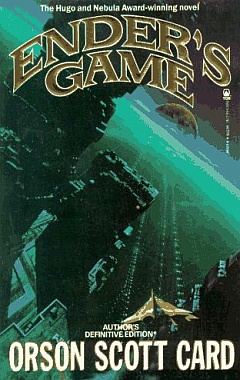 Why is this relevant? Because the cover the question references is ALSO John Harris's cover for OSC book published by Tor.

If they not only used unrelated cover for Ender's Game, but used a cover designed for another book alltogether, it's not surprising if Speaker's cover is also not very related.

Having said that, Speaker for the Dead covers Ender's career as Speaker on Trondheim, and his trip to Lusitania. So it could possibly be interpreted as Trondheim's spaceport (since Lusitania likely has a much less elaborate one, being a small colony).

But I also hated the cover on my bestselling book, because the art came from a game sold in the UK and it depicted spaceships doing generic spaceshippy stuff. I called my editor and said, “The cover art has nothing to do with my story. I write human stories, and this is a hardware cover. People who would like Ender’s Game aren’t going to pick up a cover that’s all hardware.”

“Wrong, Writer-Clown,” said my editor (using different words, but the meaning was clear): “We’re using this cover because it says ‘science fiction.’”

“There are words on the cover that say ‘science fiction,’” I pointed out, correctly. “It’s also by Orson Scott Card, known to be a sci-fi writer. It will be shelved in the sci-fi/fantasy section of the bookstore.”

“All true,” quoth my editor. “But right now, in the world of publishing, readers who want genuine sci-fi — not literary stuff, not fantasy or alternate world or time travel, but actual science fiction set in the future with different technologies and maybe, you know, some aliens — those readers don’t have many choices when they’ve read Larry Niven’s latest novel. And this cover says, ‘Here’s a novel that is REALLY sci-fi.”

“Still hate it,” I said, and have said many times since.

“Don’t care,” she said, and, likewise, repeats whenever a new book comes out with the same style of art, always completely irrelevant to what’s going on inside.

Publishers will sometimes give you a lousy cover. Publishers will sometimes give you a great cover. There is reason to believe the Ender’s Game cover is a great cover because the sales have been OK for kind of a long time. Or maybe Ender’s Game is such a good book that word-of-mouth sells it despite the cover. I don’t know, and I don’t care. Because it doesn’t matter what I think, anyway. Somebody else’s money paid for the printing and design of the book. Only when it’s my money do I get a vote.

Not the answer you're looking for? Browse other questions tagged enders-game orson-scott-card cover-art speaker-for-the-dead or ask your own question.

4
What is the cover of the Ender's Game depicting?
6
Illustration on the "Earthsea Quartet" cover
3
What is the origin of the visually complex space ship motif in cover art?

10
Are there any O.S.Card's works that follow what happens to Bean post-"Shadow of the Giant"?
5
Is there any truth to the rumor that Speaker for the Dead was ghost-written by a committee of Mormons for theological purposes?
0
Incongruous cover art for Phule's Paradise by Robert Asprin
9
How did the Hive Queen arrive in Ender's hands?
9
What species is on the cover of Fornax?
6
How old was Ender objectively at the start of Speaker for the Dead
76
Is anyone else not buying the Buggers' story?
3
What is the origin of the visually complex space ship motif in cover art?