Why can't Cell go super Saiyan given he has Saiyan DNA?

Here is something that always bugged me about Cell. Even though he was created using DNA from three Saiyans, he can't go super Saiyan. Why is this? Wouldn't he have the same ability?

It just doesn't make any sense. Also can Cell become a great ape, and by that, a ssj4? I mean he does have the potential to do it.

He does utilize the power of the Saiyans... That's why when he was blew himself up and then came back he had a golden aura around him, people considered this form Super Perfect Cell..

Take a look at this picture.. 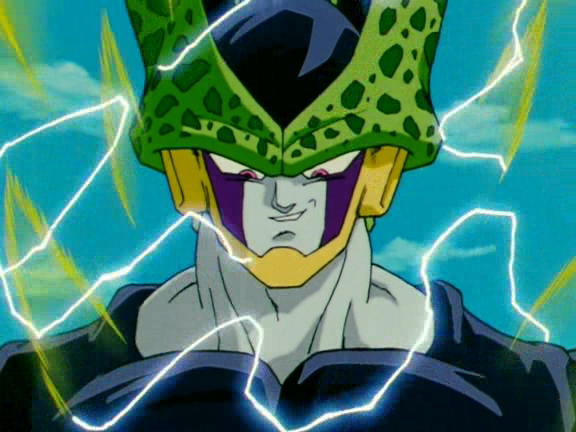 Notice that he has the Golden Aura and the electricity surrounding him... This is only commonly found on Super Saiyan 2 form that Gohan had at the time.

Also no Cell cannot become a Great Ape because he is does not have a Saiyan tail... Only Saiyans with tails can transform into the Great Ape and this in turn means he cannot become Super Saiyan 4 (which is not a canon form anyway).

Felt this needed an update after seeing people up vote this a few times.

If you think about it in the terms of hybrids, in all technicality Cell is a Saiyan Hybrid because he has DNA from multiple Saiyans. If just having the DNA is enough to go Super Saiyan, comparing him to people like Gohan, Trunks, Goten, etc who are not full Saiyans then we can assume he can use the power of a Super Saiyan.

Edit: With the recent information given by Akira Toriyama in regards to S. Cells being necessary to go Super Saiyan, we are left with the question of does Cell actually have enough S-Cells to go Super Saiyan? I believe with the previous information about the similar aura and electricity points to him having S-Cells. Another thing to note is that he has the DNA and cells from people like Vegeta, Goku, etc.

One last thing to mention is that Cell also transformed his body similar to Trunk's Grade 3 Super Saiyan, the bulky form. 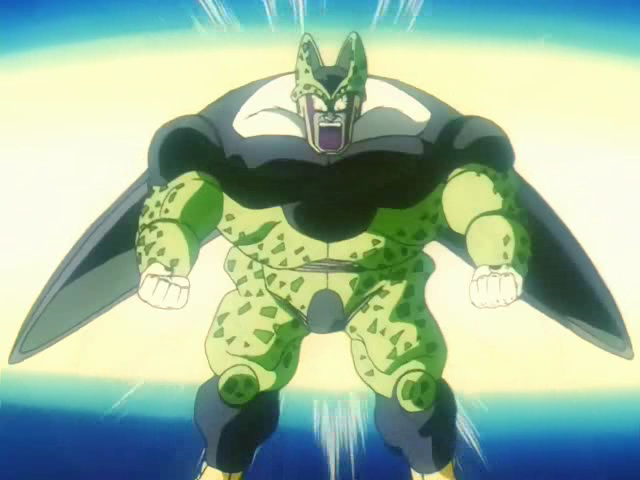 Overall the answer is Cell does have his own version of Super Saiyan but as far as we know it's unsure of whether or not he can go Ape, but I'd say he probably can't.

My Theory: Cell can't go Super Saiyan or great ape, because his saiyan DNA isn't compatible with the DNA of namekians or Whatever-the-hell-Freeza's race is. The reason human-saiyan hybrids CAN go super saiyan is because human DNA and saiyan DNA are compatible. The fact that Pan exists is proof of this, considering the fact that humans and saiyans can produce fertile offspring, which, technically means that humans and saiyans are actually the same species. Namekians are slug people that don't even have genders and reproduce asexually and I don't know what the hell Freeza is, I've assumed he was some form of lizard man. Considering the vast differences in biology, it isn't surprising that Cell doesn't possess the complete traits of is donor species'. He inherited his battle lust, and ability to increase strength from recovering from mortal injuries from the saiyans, Regeneration from Piccolo, and the lack of the need for oxygen from Freeza, and inherited his power from all three races. Some saiyan traits are incompatible with namekian and Freeza's race's DNA and some of the other races traits aren't compatible with saiyan DNA.

Cell was born with the ability to transform into a SSJ since birth. The reason why he doesn't look like one is because he doesn't have hair thus there is no gold. However he has the golden aura characteristic of Saiyans. The first time Cell became a SSJ was when he interrupted the fight against 17 and Piccolo. The second time was when he became Perfect and transformed into his equivalent of an USSJ to show Trunks how useless the transformation is. He went Super Saiyan various times during the Cell Games, when he became power weighted, inflated himself like a ballon in his Semi-Perfect form after regurgitating Android 18, after he returned from his self destruction at a SSJ2 level and he also went SSJ before he was defeated by Trunks in his timeline.

Side Note: Technically he is 1/4th Saiyan (the other species being Namekian, Frieza's race and Human). Him as a whole would make another species thus the name Super Perfect Cell.

Side Note 2: Another technical thing is that what people describe as SPC is actually SPC 2. As I said, he already had access to Super Cell that was his equivalent to SSJ. When he came back he had a much more powerful form and his aura was just like Gohan's which means this form equates to SSJ 2 thus SPC 2.

The correct answer is that this is currently unknown, as Perfect Cell has not been exposed to a full moon. Whether or not he can/is super saiyan is debatable, though personally I think you can observe that he uses super saiyan, not just the aura but when he and Trunks fight, Cell talks to him about the form. it sounds like they are both working with the same system of transformations from the way Cell talks.

As for great ape form; like I said, we haven't really seen Cell exposed to the proper lighting. Still, one would assume that he's got Vegeta's "Power Ball" to simulate moonlight and would have used it to transform sometime while looking for the future androids or during the Cell games. It's POSSIBLE that neither he nor Gero had considered trying it but unlikely as Gero should have data on the Goku/Vegeta fight.

One point that most people seem to overlook is that fact that the Cell that we see is the Cell that killed Trunks and stole his time machine. He had already seen a Super Saiyan. That's why he was never surprised by the transformation and that's why he has the same aura. He just figured it out and does it. That's my answer anyway.

Taking this a step further, it wouldn't be too far fetched that, since he has a tail, looking at the moon could potentially allow him to transform. Or even that, provided a couple Cell Jr's, he could achieve God ki and become ssgss or whatever.

If we're actually to believe that Frieza's race can improve even more rapidly through training than anyone we've seen in the show (besides Hit), the return of Cell would be epic if we had a fan write it as opposed to those clowns and old people writing Super.

Simple answer-because the writer never gave Cell a transformation beyond Perfect Cell. Perhaps because of a possible future story where Cell can use his Saiyan cells to transform. In DBZ-giving cell a transformation beyond Perfect Cell have put him up there with SSJ3 Goku/Vegito-but Majin Buu was better than just upgrading Cell. Now it would be appropriate for DB Super/possible movies and beyond.

He is an artificial rather than a real being. Spawned by dr Gero in a lab, besides the supercomputer chose what characteristics would prevail, even Cell himself said that to Piccolo when he explained his origins. He needs to be hit on the back of his head or something to know what the real Cell is like, free of the chains of that fool Gero.

I think your question would best be answered in terms of power level. For example Cell (perfect form) and I think this is canon information, was easily higher in power level than all of the super Saiyan one characters (Goku, Vegeta, Trunks so on...) and was obviously less in power level than a fully strengthed Gohan SSJ2. After Cell reformed himself after the explosion, Gohan was injured and was not at full strength (hence a more even fight). Also, all Saiyans after being near death and recuperating get an automatic boost to their power levels, so I believe Cell would have gotten this boost as well.

from the manga, Cell speaking (Chapter: 413 (DBZ 219), P10.1, P11.3-4, P12.1): "And even more happily, my body regenerated as my perfect form, even without No.18…And it wasn’t merely my perfect form: I had vastly powered up like Son Gohan…This was probably done by the Saiyan cells, which greatly increase in power when they are saved from the brink of death."

A boosted Cell's aura may have electricity in it just due to the high level of his power after his return. The other thing there is to consider is that Cell has already transformed something like three times, not counting the larvae form. Each of these took another of the androids to happen. Since "Super" Saiyan is a transformation physically, and only his aura changed, I think he would have to look different without consuming an android (spikes on his back coming out or something). 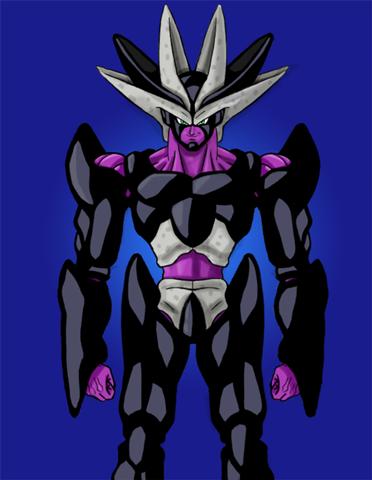 I actually think cell is part Saiyan, part Freiza`s race and part Android. So I think that makes him Seaidriodian? But he is a weird looking sluggy bug as a slug. So he starts off a slug like Frieza, then goes to golden aura and then the electric aura.