Novel or series about mages/magi and colored auras?

I read a book, or series, when I was a kid following a guy as he rose through the ranks of Magi. What I can remember is that the level of a mage's power was indicated by the color of their aura. For some reason, purple stands out in my mind. I also remember that, toward the end of the story, as the protagonist's power reached its peak, he managed to build a house/castle on the moon. I remember no names, and really no plot points.

Needless to say, trying to remember the name of the book, none the less track it down, has been frustrating. If anyone has a better memory than I, any help would be appreciated.

Afterthought; I read this in my early teens, or preteens, so it is not likely to have been released later that 2002. Also, it is likely that I got the book via Scholastic.

The colors identifying power levels sounds like the young adult series "The Seventh Tower" by Garth Nix. The magic-users of the world live in a huge castle separated from the rest of the world, and their rank and power are signified by color, with red being the lowest and violet being the highest. I read it a long time ago, so I don't remember if the protagonist ended up on the moon somehow, but I hope that helps! 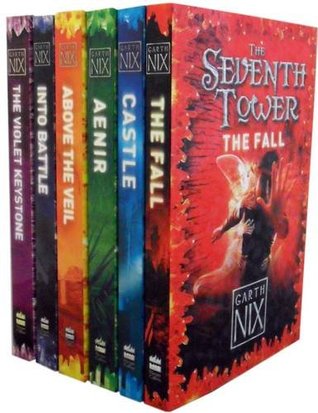 Not the answer you're looking for? Browse other questions tagged story-identification magic moon or ask your own question.

10
Novel where teens can communicate telepathically & explore space by leaving their physical bodies
14
Story Identification: Large scale space combat story
4
Fantasy book about mages, factions and a fighting house
5
Help! Book with Double Headed Character Called Neds
14
Looking for a book about talking dragons with no humans
13
Book series about a boy who becomes a wizard's apprentice and can see magical auras
7
Novel series about a group of 6 teens with powers (cause-and-effect, metabolism, bacteria, etc.)