Are there Warrant Officers in Starfleet?

Does this rank even exist, or if it does is it utilized? I've often wondered as it would seem quite applicable in many scenarios. I know that on occasion the non-commissioned ranks have been somewhat obscured for various personnel.

Chief O'Brien is referred to as a Warrant Officer in many scripts, though I do not believe the term was ever appied to him onscreen. Here is an admittedly not-very-good source on the subject; I can't seem to find the source they used on their forum, so I suspect it may be a book, rather than an online source. Memory Alpha does not include Warrant Officers in its list of Starfleet ranks, but Memory Beta, which includes information in all Star Trek media, including non-canon novels and comics, states that Warrant Officers exist in Starfleet.

The confusion seems to lie in the fact that the (canon) Star Trek Encyclopedia and (now non-canon) TNG Officer's Manual both have written references for a 'Warrant Officer' rank, despite it not being used in the shows or in any of the show scripts.

This use appears to be a typographical error that should read "Chief Petty Officer" and stands firmly at odds with the ranks laid out (in consultation with both the Studio and Gene Roddenberry) by Robert Fletcher, Senior Costume Designer for the first four Star Trek films and Costume Consultant on TNG, DS9 and Voyager.

These costume notes form the basis for all subsequent representations of Starfleet rank in the subsequent films and TV series and represent the "word of god" on the issue. 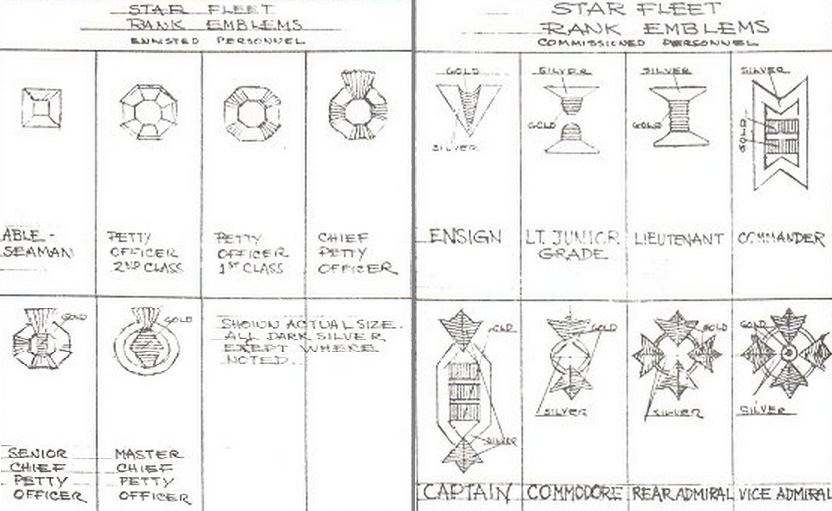 What is a Warrant Officer

There are three basic kinds of Warrant Officer in the world. All of them are more specialized in their duty than the Commissioned Officers, but with more authority than NCOs usually have.

The actual Warrant was a document issued by other than the Commissioning authority. Which was, in the UK, the Crown, and in the US, the Congress. Warrants in the UK were issued by Captains and by the Admiralty; in the US, by the President, the Admiralty, and by Captains. (It's worth noting as well, until the US CW, all the US "admiralty" were captains...)

Senior members of the Other Ranks, depending on specific service, above Colour Sergeant or Chief Petty Officer.

Note that while some US Warrant officers are promoted from the senior non-commissioned officers, they do not serve as senior NCO's, and still don't qualify.

Professional individuals in specific fields with Officer rank but not full officer training. The Soviet and Russian Praporshik and the US Army Aviation Warrant Officers are of this model.

In UK and US navies, Captains were commissioned by the Crown or Congress, and given somewhat extensive authority. That Authority included the authority to hire and warrant officers of the ship. These were specialists in charge of departments - The Quartermaster, the Sailmaster, the Botswain, the Gunner, the Carpenter, the Surgeon, and the Engineer. They held the same authority aboard as a lieutenant did, but unlike the lieutenants, they did not have authority off-ship. Later, they were issued by central Warranting boards at the admiralty, and became proper ranks. The term Master was used for many of these, such as Master of Guns, Master Engineer, and Master of Sail...

(The Petty Officers being addressed as Mates are due to their having been assigned to one of the above departments. So, a A Gunner's Mate was a petty officer assigned to assist the Gunner.)

Warrants could also be issued by captains or commodores to field promote Masters to Lieutenants. This is a form of Brevet promotion. Again, it carried weight aboard ship and/or in squadron only.

What We See On Screen In Trek

We see senior non-coms - specifically, Senior Chief Petty Officer Miles O'Brien. If the Fleet uses the UK model, yes, then, we have a warrant officer in the UK model. This is unlikely, tho', as we see Paramount fixated upon the US model in terms, titles, and progressions. Besides, he'd have been "Charge" or "Buffer", not "Chief", in that model.

We see provisional officers in duty positions on Voyager. Lieutennat Torres, Ensign Seska, and several others amongst the Maquis are given provisional rank, and it's issued by the Captain. This is the 18th Centry style of Warrant Officer. 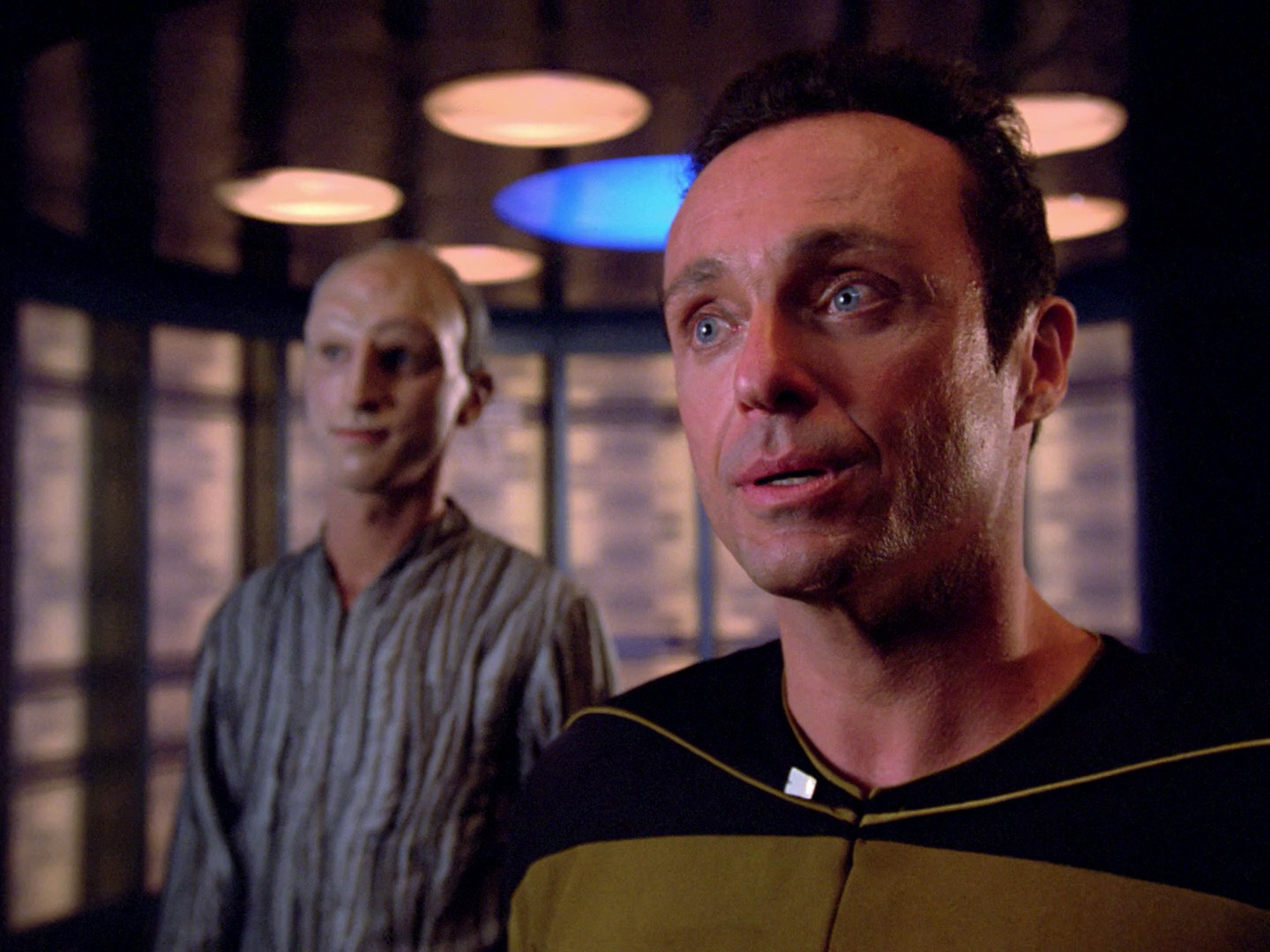 On Mr. Kosinski, we have a 2 rectangle pattern. In silver. One bright & shiny, one dark and matte finished. That sure says "Not a line Officer" to me.

Given that we see Staff Officers in standard uniform with standard pips... The implication is that he's either a Warrant Officer, a provisional officer, or an enlisted man below the rank of Chief Petty Officer. (We see Chief O'Brien in disks through TNG, so we know CPO's wear disks in that era.)

Futher, Mr. Kosinski is called "Mister Kosinski" consistently. This is the normal mode of address for both 19th Century warrants and for current US Naval and Coast Guard Warrant Officers.

FASA, in their Star Trek Roleplaying Game, included two grades of Warrant Officers. They did not include them for the Movie Era.

Neither Decipher nor Last Unicorn included them.

Some of the fiction uses them, as noted on memory Beta.

It's likely that they do, as best evidenced by both Voyager and Kosinski, but the term itself has not been used in on-screen canon.

66
Why did O'Brien start out as a transporter chief in TNG?

25
Why is Starfleet so poor at security tactics?
19
Were there military personnel / branches of service in Federation aside from StarFleet?
19
Why are there so many human Borg?
22
How unique are the adventures of the Enterprise within Starfleet?
23
How has no one annihilated the Ferengi?
26
Why are male officers referred to by their superiors as 'Mister [surname]' but female officers not as 'Miss/Mrs [surname]' in Star Trek?
5
Why is Michael Burnham’s prison uniform - not uniform?
3
Is there any official correspondence between Starfleet and Bajoran Militia ranks?
6
Does Starfleet still rate personnel on ESP?